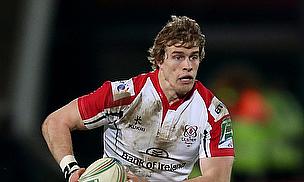 Ulster thrashed Connacht 58-12 to claim a bonus point win that puts them right back in the hunt for a RaboDirect Pro12 play-off place.

Andrew Trimble scored a hat-trick, Paul Marshall grabbed a brace and there was one apiece for Tommy Bowe, Luke Marshall and Craig Gilroy.

Connacht scored tries through Dave McSharry and Darragh Leader as Miah Nikora converted Leader's try in the second half.

Ulster wasted little time in imposing themselves when scrum-half Paul Marshall darted over after Dan Park failed to find Fiona Carr with a cross-field kick inside his own half.

Jackson missed the conversion and after seven minutes Connacht levelled, recycling the ball through multiple phases to enable McSharry to cross on the left.

Parks missed the conversion and the scores did not remain level for long, Jackson landing a penalty to put his side 8-5 up.

Slick handling saw Trimble pop up on the left wing to score Ulster's second try which was also unconverted.

The missed extras were not hurting the home side, however, as Trimble set up Bowe for their third try and Jackson - via the post - did convert.

And the bonus point was secured two minutes later when a quick throw by Trimble found Paul Marshall, whose angled run helped him cross under the posts.

Jackson converted to put Ulster 27-5 up after a whirlwind 23 minutes and his second penalty kick handed his side a 30-5 lead at the break.

Just one minute into the second half and Ulster were crossing the line once more, Bowe picking up the ball after a Connacht mistake and feeding Trimble, who ran in unopposed to score. Jackson's conversion made it 37-5.

Bowe was involed again as Luke Marshall crossed for Ulster's sixth and after Connacht's Michael Swift was sin-binned in the 57th minute, Trimble raced over for his hat-trick and the half-century mark was passed with Jackson's conversion.

Five minutes later Ulster were at it again, Gilroy gathering McKinney's chip through to score and the replacement fly-half landing a fine conversion to end the scoring.