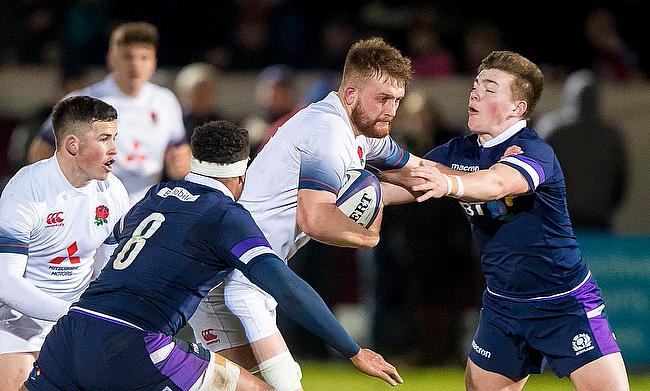 France have maintained their winning streak while Scotland and Wales bounced back with wins over England and Ireland respectively in round three of the U20 Six Nations Championship.

Even though Italy responded with two tries in the second half coming from Simone Cornelli (50') and replacement Edoardo Iachizzi (55'), Etcheverry (41' and 68'), Julien Delbouis (61') and Jean-Baptiste Gros (78') scored further tries for France with Carbonel and Jules Gimbert sharing nine conversions between them to complete a resounding 66 point victory.

Standings: France have maintained the top position in the table with three wins from as many games while Italy languish at the bottom.

Scotland U20s came from behind to complete a 24-17 victory over their England counterparts with a dominant second half performance. Tom Hardwick kicked a 10th minute penalty to get England off the mark but Scotland bounced back with a 20th minute try from Ewan Johnson and a conversion from Harry Byrne. With 10 minutes to go into the break, England made a strong comeback with touchdowns from Tom Hardwick (31') and Tom Seabrook (35') as the visitors headed into the second half with a 7-17 lead.

England's momentum was dented in the second half when Jordan Olowofela was yellow-carded in the 49th minute but a double from Finlay Richardson (50' and 69') with a 63rd minute penalty try sealed a 24-17 victory for the Dark Blues.

Standings: England are positioned second in the table despite the defeat while Scotland are at fifth.

A last-gasp try from Tommy O'Brien did not prove enough as Ireland U20s succumbed to a thrilling three-point defeat against Wales. The visitors dominated the first 15 minutes with tries from Tom Rogers (2') and Max Williams (8') while Cai Evans slotted a conversion. Harry Byrne got Ireland off the mark with a 15th-minute penalty goal but Wales still had the upper hand with their third try coming from James Botham but Ireland cut down the deficit to 10-19 following a 35th minute try from Angus Curtis and a conversion from Byrne.

In an eventful third quarter, Wales had three more tries coming from Tommy Reffell (41'), Botham (51') and Callum Carson (56') but Ireland were still in the hunt with back to back tries from Jack O'Sullivan (46' and 55') and a 63rd minute try from Jonny Stewart. Wales had a 10 point lead with eight minutes to go following Cai Evans penalty goal. Just like it looked all over for Ireland,
Tommy O'Brien gave them hope with a 75th minute try and a conversion from Stewart brought down the gap to three point but the final push could not quite come.