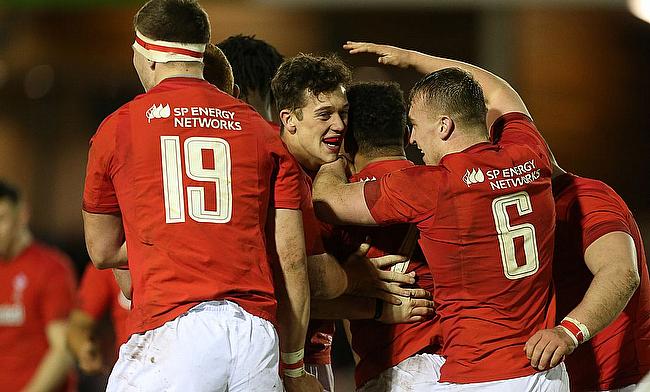 Wales U20s topped the table after the opening round

The opening round of the U20 Six Nations Championship kicked-off on Friday with Wales, England and France registering bonus point victories.

James Grayson started with a second minute penalty for England in the Gorizia encounter while Ben Earl added five more points to England's tally with a touchdown in the 18th minute as they claimed a 0-8 lead that was reduced to just one point when Italy pulled back things with a try from Matteo Luccardi and a conversion from Antonio Rizzi in the added minutes of the first half.

With everything to play for in the second half, England upped the ante in the third quarter with tries from Ben White (48'), Tom Parton (50') and Ben Loader (60') which saw them claim the bonus point. As the 10 minutes kicked-off, England looked comfortable with an 8-27 lead but sin-bins to Sam Lewis and Earl with the second one also resulting in a penalty try saw Italy reduce the losing margin to 10 points. England are positioned second in the table now.

Wales looked in total control right from the start with Harri Morgan going past the line in the second minute while Joe Goodchild (22'), Corey Baldwin (26 and 76') and flanker Dan Davis (70') added further tries with fullback Cai Evans kicking four conversions and a penalty to put the home side at a comfortable position of 36 points as compared to Scotland, who had their only points in the game coming from a penalty from fullback Paddy Dewhirst. Wales occupy the pole position in the table after a dominant victory.

Romain Ntamack starred for France as they managed to overcome a second half comeback from Ireland to complete a 10 point victory in the tournament opener. Ntamack was under complete control in the first half as he racked up tries in the 12th and 28th minutes while also kicking a couple of conversions and a penalty. Ibrahim Diallo was the other try scorer for France in the first half as they headed into the break with a convincing 22-3 lead.

A sin-bin to Iban Etcheverry after the restart hampered France's momentum as Ireland were awarded a penalty try and just at the end of third quarter, Jonny Stewart scored the opening try for the visitors as they reduced their arrears to seven points. Despite, Ireland's second try coming through James McCarthy gave them hope, France managed to held on to their lead with touchdowns from Jules Gimbert and Demba Bamba.