U18 Premiership Academy Players to Watch 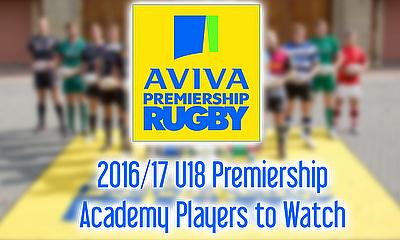 The 2016/17 Aviva Premiership season is knocking on the door and alongside its senior counterpart comes the less-talked-about-but-equally-entertaining U18 Premiership Academy League.

The competition involves the 14 teams who are members of Premier Rugby Ltd (current 12 teams plus London Irish and Yorkshire Carnegie) and it is held over the first half of the Premiership season before the top six teams meet on Finals Day early in the new year. London Irish are the reigning champions, having beaten Gloucester in last year’s final.

We take a look below at a number of players from across the competition to keep your eye on this season.

Remember, these guys aren’t the next big thing, they’re the next next big thing and their chances of senior rugby this season will be limited to ‘A’ League rugby and possibly an Anglo-Welsh Cup appearance or two. A number of these players should go on to form the core of England’s U18 squad in 2017.

Scrum-half Cameron Brown (Millfield School) is a talent to keep an eye on at Bath and will return this year for his second season with the club’s U18 side. He has previously represented England at U16 and U17 level and is potentially a long-term partner to George Ford, should the England fly-half decide to stay at the club over the coming years.

Moving on to Exeter and the focus switches to the pack and to versatile prop Marcus Street (Bicton College). A loosehead by trade but who has also played at tighthead at England age-grade levels, Street has the scrummaging ability and work rate to make himself a real asset to Exeter a few years down the road. As a club, Exeter have recruited heavily in their front row over recent years and a player like Street may be able to buck that trend.

A way up the road in Gloucester and it’s another prop making waves, this time a specialist tighthead, Harrison Fowke (Bromsgrove School). Gloucester’s all-England U18 front row of Henry Walker, Ciaran Knight and Alex Seville should all progress from the U18 League this season, creating more opportunities for Fowke. Scrummaging has been an issue for Gloucester’s senior team for a number of seasons now and developing talents like Fowke, Walker, Knight and Seville is just what the Cherry and Whites need to do to push themselves back up the Premiership table.

At Harlequins, lock John Okafor (Wellington College) is a fast-rising talent who fits the mould of modern rugby’s uber-athletic second rows. The likes of Maro Itoje, Iain Henderson and Eben Etzebeth have redefined the position at senior level and it now arguably offers the best physical specimens the game has to offer. As a club, Quins have produced test-calibre talents at almost every position of late, with lock being a noticeable absentee, and that could change if Okafor continues to develop and reach his potential.

Sticking with Quins and fly-half Marcus Smith (Brighton College) could eventually solve the club’s inevitable post-Nick Evans blues. Smith has represented England previously at U16 level, starting outside Bath’s Cameron Brown, and was a recent call-up to Quins’ Singha 7s squad. Between Smith, Okafor and a number of other talented individuals, Quins are a strong bet to be in the mix on Finals Day this season.

Up in Leicester, academy players have had a tough time breaking through to the first team of late but one player who will be hoping to break that trend is loosehead prop Oscar Harper (John Cleveland College). Tigers have a rich history of top level front row play and the path to senior opportunities at Welford Road certainly seems clearer at loosehead than it does at tighthead right now. Until then, Harper would be advised to stick as close as possible to Marcos Ayerza and soak up every bit of advice the Argentinean has for him.

Moving north and wing Ikenna Obonna (RGS Newcastle) is a player making people sit up and take notice at Newcastle. Exciting wings with good amounts of pace and effective footwork are always pretty noteworthy but even more so when they are affiliated with a club that plays on an artificial pitch. Adam Radwan featured prominently for Newcastle at U18 level last season and was rewarded with a place in their Singha 7s squad last month and there’s no reason why Obonna can’t replicate that this season.

Speaking of wingers with good footwork and plenty of pace, Tosin Segun (Stowe School) at Northampton will be a player to watch not only in the Academy League, but also for England U18s when they take part in their annual trip to South Africa next summer. He follows in the footsteps of his brother, Rotimi, who came through Northampton’s academy before moving to Saracens in order to continue his studies, and Tosin shares a number of traits with his elder brother. He is a solid candidate for the Academy League’s top try scorer this season.

At Sale, number eight Sam Moore (Sedbergh) is already garnering plenty of attention at U18 level, having travelled to South Africa with the England U18 side and featured alongside his club and back row teammates Ben and Tom Curry. Whilst the Curry twins will have their sights on ‘A’ League and Anglo-Welsh Cup rugby this season, Moore should take over as the main man of Sale’s U18 back row. With these three players and recent World Rugby U20 Championship-winning blindside George Nott all coming through at Sale, the side from the North-West could have an abundance of back row riches to work with in the coming years.

Back to London and Saracens will be hoping to bounce back from not making Finals Day last season and their attempt will be spearheaded by inside centre Reuben Bird-Tulloch (Harrow). The Saracens academy has played a huge role in delivering multiple titles for the England U20s, the senior Saracens side and England’s recent Six Nations and Australian tour successes. To borrow a phrase from the NFL, Bird-Tulloch is a genuine playmaker, capable of hurting teams with his carrying, footwork and speed or his measured distribution.

Just like Sale’s Sam Moore, Wasps’ Tom Willis (Henley College) also made the England U18 tour to South Africa this year. A powerful number eight, Willis was one of Wasps’ standouts in last season’s Academy League and will return this season and attempt to replicate the form that saw him recognised by England. Alongside Ehize Ehizode, who progresses to Wasps’ senior academy this season, Willis looked physically superior at U18 level in the Academy League and with another year under his belt, could be a dominant force this season.

We finish up with highly-touted hooker Beck Cutting (Bromsgrove School) at Worcester, who is following in the footsteps of England U20 hooker Jack Singleton. Singleton, Huw Taylor, Jamie Shillcock and Andrew Kitchener all featured for England U20s last season and will push on for senior involvement at Worcester and Cutting will now take the lead at the forefront of the club’s productive academy. Worcester made finals day last season after shining throughout the campaign and strong set-piece play from Cutting will help them do the same again this season.