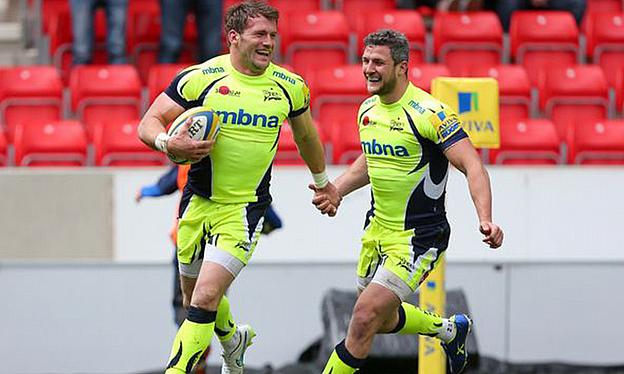 Mark Cueto scored on his final home game in a Sale shirt as they secured a deserved 34-28 Aviva Premiership triumph over Newcastle at the AJ Bell Stadium.

Steve Diamond's men controlled the majority of the first half and forged a 24-11 interval lead through Chris Cusiter, Cueto and Sam Tuitupou tries, as well as nine points from the boot of Danny Cipriani.

The Falcons' response came via Adam Powell's touchdown and two Rory Clegg penalties but, despite another Clegg three-pointer in the second period, the Sharks appeared to have secured the win through Dave Seymour's effort.

However, Richard Mayhew and Juan Pablo Socino went over late on to give the visitors hope, although TJ Ioane's try for the hosts kept them at arm's length.

Sale went into the game with just a slim chance of qualifying for the European Champions Cup due to Gloucester's victory in the Challenge Cup.

The Cherry and Whites' win against Edinburgh meant seventh place will not be enough for the Manchester outfit to enter the play-off matches.

Instead, they will have to finish in sixth to secure top-level European rugby next season and are therefore reliant on Wasps losing both of their remaining encounters.

Despite knowing that their campaign is effectively over, the Sharks started brightly, testing the Newcastle defence early on.

However, a deserved yellow card for a tip-tackle by Tommy Taylor saw them reduced to 14 men after two minutes.

Unperturbed by that setback, the hosts went on the attack for the second time and scored a superbly worked try which ended in Cusiter taking advantage of Josh Beaumont's scything break.

It was a disappointing start for the visitors, who themselves had little to play for, residing in the bottom half of the table and not hampered by any relegation fears.

But the Falcons produced an excellent response against a team still down a player and reduced the deficit to 7-5.

Their forwards continually made it over the line and that opened the space for Powell to go through a gaping hole and cross the whitewash.

Dean Richards' men could not maintain that momentum once Taylor returned to the field and it was Sale who assumed command and put together another well-worked score.

It resulted in Cueto - who will finish his career next weekend at Exeter after 15 years with the Sharks - going over as he finished a move which began with Tom Arscott breaking the gainline and ended in Tom Brady unselfishly feeding the experienced winger.

Clegg and Cipriani traded penalties before the Newcastle stand-off kicked his second from the tee to bring the Tyneside-based outfit to within six points of the home side.

That was as close as they got as the Sharks simply lifted the intensity once more and touched down for their third try through Tuitupou's close-range effort to end the half 24-11 in front.

To Newcastle's credit, they fought back at the start of the second period. Although Cueto briefly threatened, the away team controlled the set-piece battle and won a penalty at the scrum which their pivot duly converted.

However, Sale soon had their fourth try when good work from Arscott allowed Seymour to touch down for the decisive score.

That looked to have ended the visitors' chances of coming back into the encounter, but back-rower Mayhew kept Newcastle in the contest by crossing the whitewash.

Ioane's try gave Diamond's men some breathing space before Socino went over to produce an exciting finish, but the Sharks held on.