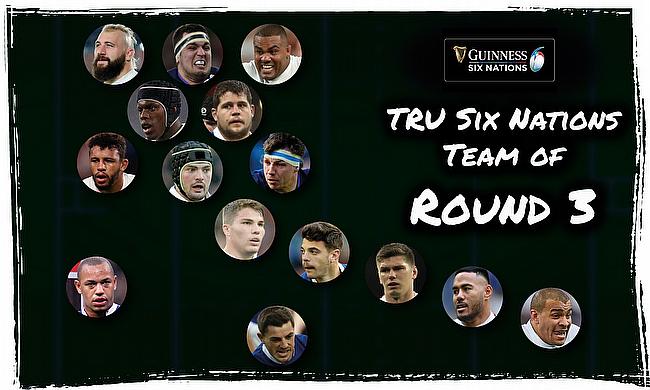 Joe Harvey puts together TRU's Six Nations team of the week from Round 3, with France the only unbeaten side at the top of the table.

1. Joe Marler (England) - Great to see him putting in that kind of aggressive and abrasive performance, ensuring we didn't feel Mako's loss as hard.

2. Stuart McInally (Scotland) - Impressive workrate around the park despite Italian defensive pressures... Would love to see Chat with more gametime!

3. Kyle Sinckler (England) - Showed maturity in keeping his head while poeple around him were losing theirs, a solid shift in a brutally physical game.

4. Maro Itoje (England) - Busy at the lineout which was key to unlocking the Irish defense in their maul try, 17 tackles to his name.

5. Paul Willemse (France) - Bounced his way to a try, but most of his work was done elsewhere in his ball-carrying and monumental 20-tackle defensive effort.

6. Courtney Lawes (England) - Put in a Man of the Match performance on his birthday, his game filled with the usual dynamic carrying and ferocious tackling.

7. Hamish Watson (Scotland) - Carried hard throughout, forced two turnovers and continuously slowed the ball down to halt any Italian momentum. A nod to Underhill.

8. Gregory Alldritt (France) - A third week in our Team of the Week, plays above his years, over 100 carrying metres getting France over the gainline.

9. Antoine Dupont (France) - Another third appearance, played unbelievably well under the spotlight, a livewire in any situation, a constant attacking thorn.

10. Romain Ntamack (France) - Makes it back-to-back in the team of the week, kicked France into the right areas of the pitch, and the courage to go for the intercept.

11. Gael Fickou (France) - Not the only centre playing on the wing, but showed his class out of position, came in field on ocassion looking for more touches.

12. Owen Farrell (England) - Apart from his episode on the floor... he lead from the front, kicked with real confidence and stopped the large Irish centres getting.

13. Manu Tuilagi (England) - Brought so much on his return, attacks with real strength drawing in Irish defenders whenever he gets the ball in space or in the tight.

14. Jonathan Joseph (England) - the second centre out of position but similarly shone out wide, solid under the high ball, and impressed with his mazey runs.

15. Anthony Bouthier (France) - The 27-year-old racked up 122 metres with the ball in hand, including scoring the crucial first try at the Principality Stadium. Hogg impressed also.