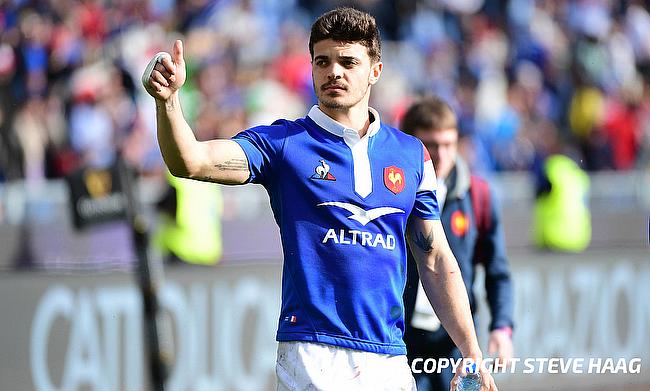 Romain Ntamack contributed with 17 points as France resisted Wales with a 23-27 win in the third round of the Six Nations tournament at Principality Stadium on Saturday.

This is France's first win in Cardiff since 2010 and the third win in the ongoing tournament as they maintained their top position with 13 points while Wales are at third win six points. France will also be hoping to win their first Grand Slam since 2010 with games against Scotland and Ireland remaining.

Dan Biggar started the proceedings with a fourth minute penalty goal before France responded back strong with a try from Anthony Bouthier in the seventh minute after capitalising on a kick from Ntamack, who also kicked the conversion to make the scoreline 3-7.

Wales had their own problems to deal with as George North left the field following a collision with Gael Fickou and failed to clear a head injury assessment. With Ntamack and Biggar trading penalties in the 19th and 26th minutes respectively, France maintained their four point lead.

France thought they scored a second try through Fickou but was ruled out as Bouthier was guilty of a forward pass on the build up. Nevertheless, they did not wait much as Paul Willemse dotted down in the 30th minute that was improved by Ntamack before Biggar with his third penalty kick to reduce Wales' deficit to 9-17.

As the half-time was nearing, France were reduced to 14-men temporarily with George Alldritt sin-binned. However, they did well almost not to concede a point before Dillon Lewis scored Wales' opening try in the 47th minute and Biggar improved it to reduce the trail to one point.

But his effort was negated as France responded back immediately on returning to full strength with a converted try from Ntamack in the 52nd minute to restore their eight point lead.

The fly-half with his second penalty kick in the 63rd minute made the scoreline 16-27 but they had their nervous moment when Mohamed Haouas was yellow-carded for an infringement in the 69th minute following which a converted try from Biggar in the 75th minute gave Wales hope but eventually were edged out by four points.