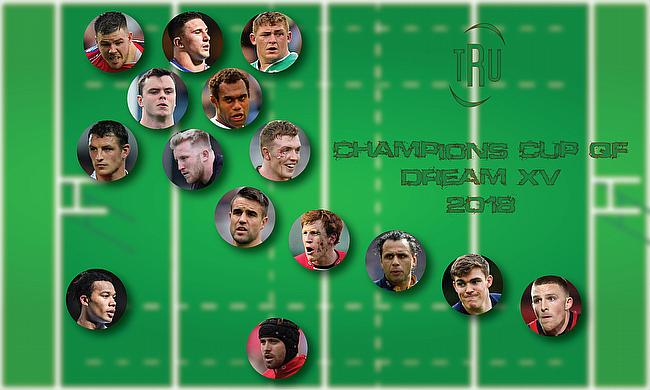 We pick out our Dream XV from this year's European Champions Cup Quarter Finals.

15 Leigh Halfpenny (Scarlets) – Halfpenny may not be the most attractive full-back, but he is a great accumulator of points from his boot. Scoring 19 points at the weekend Halfpenny gathered the most points out of any other player in this round of fixtures.

13. Garry Ringrose (Leinster) – Ringrose was still relatively fresh after his two-game showing for Ireland in the latter stages of the Six Nations. Scoring a try after running a good line to evade Saracens defence, the outside centre received Nacewa’s pass with the pace and power that it deserved to get over the line.

12. Isa Nacewa (Leinster) – Playing in what can be seen as an unnatural position for the Fijian, Nacewa worked well with Johnny Sexton to pick apart Sarries. Instrumental in Garry Ringrose’s try Nacewa can’t be overlooked as the most effective inside centre of this weekend’s fixtures.

11. Teddy Thomas (Racing 92) – The French winger clearly has a point to prove to national coach, Jaques Brunel. Making a series of defence busting runs, Thomas was vital in Racing’s win over their Top 14 rivals.

10. Rhys Patchell (Scarlets) – Scoring a try as well as being Scarlets’ playmaker, Patchell was the reason Scarlets maintained their high intensity to beat La Rochelle.

9. Conor Murray (Munster) – The Irish scrum-half was smart against opposition Toulon, sneaking in for his try, much to the befuddlement of the French side. Accompanied with good tempo in a stop-start game Murray was easily the stand-out nine in the quarter-final.

1. Rob Evans (Scarlets) – Evans was probably second best going into his contest with La Rochelle tighthead prop Uini Antonio. Evans didn’t let 155kg Antonio get the best of him at scrum time, impressing both the Llanelli faithful and the neutrals watching at home.

2. Camille Chat (Racing 92) – The French hooker made a series of carries that put Racing 92 on the front foot. Chat was the catalyst behind a number of forward moves that saw Racing 92 win at the Stade Marcel Michelin.

4. James Ryan (Leinster) – James Ryan can do no wrong as he continues to still have not lost a professional game. Fresh from international duty, Ryan bullied his opposite number, former golden boy Maro Itoje.

5. Leone Nakarawa (Racing 92) – A former Fijian sevens star, Nakarawa is truly blessed with natural rugby skill. The second-row used his incredible pace to crash over the line for one try and was effective at the line-out.

6. Aaron Shingler (Scarlets) – Early on Scarlets’ back row as hampered by James Davies being moved to the wing, but Shingler maintained his composure to be one of Scarlets’ top performers. The big blindside flanker was instrumental in preventing La Rochelle’s big pack from dominating the Scarlets.

7. Daniel Leavy (Leinster) – Leavy can only thank Sean O’Brien’s injury for his recent successes in both green and blue. The Leinsterman was by far the stand-out player in the Leinster side. Picking carefully when getting into ruck’s, also offering a great ball-carrying option. His efforts were rewarded with both a try and a black eye.

8. Jackson Wray (Saracens) – Easily Sarries stand-out player in what was, ultimately, a disappointing day for the travelling team. Continuing his consistent form for his club, with good ball carrying and offering his physicality at the ruck

Special Note* Dan Carter (Racing 92)– Important impact substitution off the bench for Racing, Carter showed that he still has a lot to offer for the Parisiens.