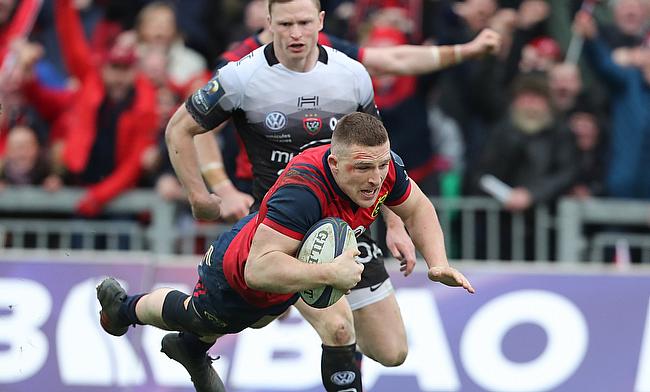 Andrew Conway took on the mantle of matchwinner for Munster as his stunning 74th-minute try saw them pip Toulon 20-19 in a titanic European Champions Cup quarter-final at Thomond Park.

Winger Conway’s decisive score from a kick return, which saw him beat four defenders from near halfway, sent the Irish province through to a record 13th European semi-final and a trip to France to face either Clermont Auvergne or Racing 92.

Replacement Francois Trinh-Duc almost inspired a famous Limerick victory for Toulon, kicking two penalties and having a key involvement in Chris Ashton’s converted try as the three-time champions began the final quarter with 13 points in little over seven minutes.

However, Munster – who led 10-6 at half-time thanks to an opportunist Conor Murray try near the half hour mark – used all of their cup nous to pull off a gritty comeback triumph thanks to Conway’s dazzling effort and Ian Keatley’s all-important conversion.

Toulon’s threat was obvious right from the first minute, fortune favouring Munster as Simon Zebo did just enough to prevent Ashton from scoring off Eric Escande’s dangerous kick. Not for the first time, the hosts rode their luck in avoiding a possible penalty try.

Peter O’Mahony’s lineout steal, coupled with Conway’s vital tackle on Josua Tuisova on the opposite wing, kept the visitors scoreless until Anthony Belleau, a late inclusion at fly-half for Trinh-Duc, fired over a well-struck 10th-minute penalty.

After Munster turned down a long-range kick, CJ Stander was squeezed out in the left corner and the covering Ashton beat Conway to a Simon Zebo kick through.

Raphael Lakafia’s hoovering up of Billy Holland’s lineout steal allowed the beefy Toulon pack to get within range for Belleau to score an 18th-minute drop goal for a 6-0 lead.

The injury-enforced withdrawal of Zebo robbed Munster of one of their key attackers but a couple of frenzied kick chases, allied to a strong carry from Jack O’Donoghue, led to Murray’s momentum-changing 27th-minute score. Toulon thought they had covered the danger, only for France captain Guilhem Guirado to knock on at a ruck close to his own line and Murray pounced to ground the ball.

A prolonged deliberation between referee Nigel Owens and TMO Jonathan Mason went Munster’s way, and Keatley converted and then tagged on a 31st-minute penalty, punishing Semi Radradra for tackling replacement Darren Sweetnam without the ball.

Murray was short and wide with a penalty attempt just inside the Toulon half, before the French powerhouses got no reward again from a Dave Attwood break and a threatening late attack that saw Sam Arnold bump Ma’a Nonu into touch.

Defences were on top in the early stages of the second period, Munster getting on the front foot with O’Mahony continuing to cause problems for the Toulon lineout. The excellent Arnold hauled down Tuisova as he threatened from deep, while the consistently well-positioned Ashton covered Sweetnam’s chip-and-chase effort.

Radradra just lost control of the ball as he stretched for the line, under pressure from Alex Wootton, before Trinh-Duc punished Jean Kleyn’s side entry at a maul to cut the gap to 13-9.

It got even better for the travelling support when Trinh-Duc’s offload near halfway was adjudged to be flat, releasing Mathieu Bastareaud who charged through and put the supporting Ashton diving in under the posts. Suddenly, Toulon had a grip on proceedings as Trinh-Duc’s pinpoint 48-metre penalty, won by Tuisova, gave them a 19-13 advantage.

It was all hands to the pump for Johann van Graan’s injury-hit side, replacement Niall Scannell being held up by Bastareaud before Munster’s decision to go wide was foiled by the Toulon rearguard.

Conway came to Munster’s rescue, brilliantly keeping a Trinh-Duc clearance in play and, with Tuisova having run infield, the Ireland international expertly slalomed his way through the cover to cross close to the posts. Keatley added the extras and Munster’s defence did the rest, frustrating Toulon into submission.