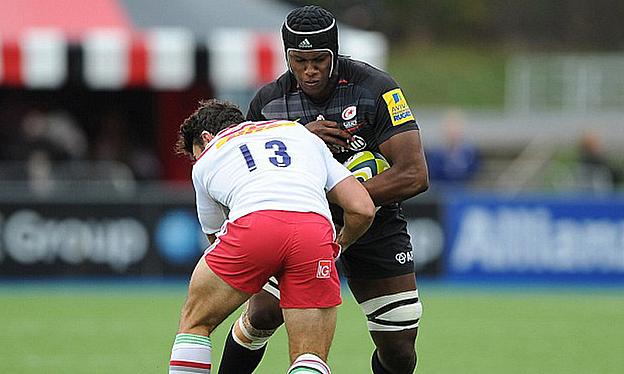 Maro Itoje a name for the future
©PA

No Aviva Premiership this weekend, but with a full-slate of Guinness Pro 12 and LV= Cup rugby, there were plenty of opportunities for players to make a name for themselves and boost their stock.

Our ‘Stock Fallers’ are limited due to most of the players with stock to lose being locked away in their training bases preparing for the autumn internationals, but we have still managed to unearth a couple of noteworthy tumblers for you this week. With no further ado, here is this week’s Stock Watch.

Maro Itoje, Saracens and England
Despite the presence of seasoned internationals like Jim Hamilton and Jacques Burger in the XV, the 20-year old Itoje was named captain for his side’s clash with Harlequins on Sunday. The trademark defensive physicality he showed time and time again at U20 level translated well to senior level, as he recorded 12 tackles, forced three turnovers and along with Ernst Joubert, managed to disrupt Quins’ lineout. He led from the front throughout and showed good maturity with the captaincy, clearly not negatively affected by the occasion and/or responsibility in the slightest.
During the game, Alex Sanderson said it was only a matter of time until Itoje breaks through into Saracens’ first XV proper and it would take a brave man to bet against that happening this season. If he can do just that, do not be surprised to see the hybrid lock-flanker amongst the bolters for a place in England’s Rugby World Cup squad – he’s that good.

Sam Davies, Ospreys and Wales
With Dan Biggar called-up to Warren Gatland’s Wales squad, Davies got a chance to shine on Friday night against Connnacht, a chance he took with both hands. The former IRB Junior Player of the Year contributed 16 points to the Ospreys’ 26-11 win over Connacht and looked mature beyond his 21 years whenever he got hold of the ball. A composed blend of running with ball in hand and distributing to the equally impressive Josh Matavesi ensured that Davies kept the Connacht defence on their toes throughout the game.
Fighting for playing time at the Ospreys remains Davies’ biggest challenge, but there is no doubt the young fly-half has the potential to make a big impact at the next level. Along with Rhys Patchell, Owen Williams and Gareth Anscombe, Gatland has a growing number of options to choose from at fly-half and the two-horse race between Biggar and Rhys Priestland could soon be blown wide open.

Dominic Ryan and Jack Conan, Leinster and Ireland
Ryan and Conan, alongside Kevin McLaughlin, put on a real show in Leinster’s back row against Edinburgh on Friday night. The pair contributed three tries and 32 tackles between them, as they helped power Leinster to a comprehensive 33-8 victory over Edinburgh at the RDS. Their work at the breakdown was also excellent, outplaying Edinburgh completely on the floor, which laid the foundations for backs like Luke Fitzgerald and Noel Reid to impress with quick ball.
Ryan was released from the Ireland squad by Joe Schmidt to play in this game and his performance will certainly have boosted his chances of featuring for Ireland this autumn, most likely in their game against Georgia. Conan is a bit further down the Irish pecking order, but if he continues to turn in games like this, he could push CJ Stander for the mantle of Jamie Heaslip’s long-term successor.

James Hilterbrand, Edinburgh and Scotland or USA (or Australia)
The awry lineout throwing of Ross Ford has been a big contributor to the struggles endured by Edinburgh and Scotland recently, but Hilterbrand could be the answer to those problems. Edinburgh were outplayed in every facet other than the set-piece on Friday, but did have the upper hand on their Irish rivals at the lineout. A 93.3% success rate on their own throws was a real fillip for Edinburgh and much of that can be attributed to the precise darts being thrown by Hilterbrand.
The Australian has to dislodge one of Ford, Fraser Brown or Scott Lawson to secure a place in the Scottish squad, but if Vern Cotter’s side struggle at the set-piece this autumn, Hilterbrand could be playing his way into contention with performances such as this.

Aaron Jarvis, Ospreys and Wales
With Nicky Smith, Scott Baldwin and Dmitri Arhip all missing from the Ospreys’ starting front row, the replacements struggled to keep up the unit’s sparkling start to the season. Jarvis was targeted by Connacht and struggled to live with Irish loosehead Dennis Buckley. Fortunately for the Ospreys, their lack of stability at the scrum didn’t cost them in terms of the overall result, but it was a game that Jarvis and fellow prop Duncan Jones will not look back on with too much fondness.

Andrew Conway, Munster and Ireland
Not a terrible performance by any means, but Conway had a messy game against Cardiff on Saturday, something he can’t afford if he wants to force himself into Schmidt’s thoughts. A number of missed tackles from the winger almost cost Munster, who hung on for a 28-24 victory in Cardiff, whilst he also tended to isolate himself with his runs, often leading to turnovers. Ireland are well-equipped for dangerous wingers, so Conway will need to find another gear if he is to break into that group.