TRU’s Elizabeth Cartwright: What Rugby Means To Me 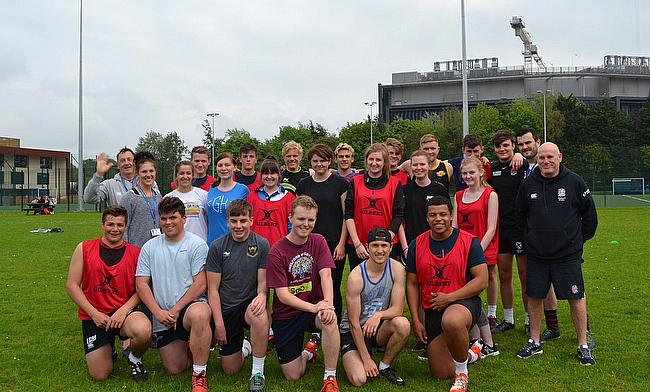 Rugby has been a major part of Elizabeth's life
©Elizabeth Cartwright

Stef Evans Exclusive - Falling back in love with rugby and turning #ICare awareness into action
Series Three: Looseheadz x TRU Podcast: Nolli Waterman on punditry, mental health and the Red Roses
Charlie Beckett Column: Why #ICare
Exclusive - Rachael Burford: “We want to showcase our role models in the game to help inspire others”

Today is International Women’s Day so I thought it seemed fitting to write about my love for the game as a female sports journalist and rugby fan.

I've been attending games since the age of six and I support Leicester Tigers and England. When I'm not working as a Nursery Practitioner, I am working as a Sports Journalist. I have been fortunate enough to write for TRU since November 2020.

When I joined college in September 2015, I plucked up the courage to ask the PE department whether I could set up a girl’s rugby team.

I wanted to promote the 'This Girl Can' campaign and show everyone that it's a game for both genders. They said yes and the boy’s rugby coach said he'd help coach us. I was delighted and created posters and flyers to put up around the college.

By Christmas, there were about 10 students who would turn up every week. We named ourselves: 'The Long Road Panthers' and I was elected captain. It wasn't easy and some weeks, we'd have only a couple of students, but I didn't give up and overall, it was successful.

@andNickMullins @Sarraelgan @IamAustinHealey @BenKay5 @dallaglio8 @ugomonye I've written an article for @TalkRugbyUnion discussing the talented back row in English??! Would love it if any of you could take a look????. In awe of what you all do, thank you??https://t.co/9BXHU3YvAz

Our coach, Richard, was fantastic and he never missed a session. He taught us the basics and how to tackle. We'd then play mini-games and he would referee. A small group of us ended up being invited to play for the National Championships in Nottingham a year later. It was an eye-opening experience.

My work in rugby was recognised by the RFU, who appointed me as a Young Rugby Ambassador. This involved promoting the game in my local area and at college. I also attended conferences at Twickenham to share my experiences with other Young Rugby Ambassadors. I was having the time of my life and was on such a high.

Unfortunately, two years later, I had to give up my beloved sport after developing Arthritis. I was in a state of shock and devastated not to be able to play rugby again. Around the college, I was known as "Happy Lizzie" and "the girl who set up a female rugby team". When I had to pack it all in, I was gutted and felt I let the team down.

However, I didn't let it defeat me and here I am, three years later, sharing my story as a female sports journalist. I'm proud as punch.

When the coronavirus hit last year and the country went into lockdown, I started a blog called AllThingsRugbyUnion. I interviewed several professional rugby players, including Charlie Beckett and Paolo Odogwu, as well as BBC rugby correspondent Chris Jones.

Over 1,300 people read my most successful blog. I commented on some new signings that were set to join the Premiership that season. It was well-received within the rugby community and the positive feedback from fans was most rewarding.

Following the success of my blog, I was asked to write for Talking Rugby Union. I have been fortunate enough to interview a few players; Red Roses Captain Sarah Hunter, along with Head Coach Simon Middleton. Last month, I also had the pleasure of interviewing fly-half Freddie Burns about his move to Japan from the Premiership.

Being a female and writing about the sport I've been so heavily involved in for the past 16 years is, in my opinion, the best job in the world. The dream would be to pursue it full time.

"I love and loathe social media in equal measures.

"My issue is when you @ the subject of your negativity. That's almost like writing a letter to someone and posting it to their house!"

I'm in awe of Sarra Elgan and the way she presents herself for BT Sport. I would love to do her job one day and break down that barrier within rugby. Female rugby is on the rise and this year more than ever is the time to follow it if you don't already.

The Women’s Six Nations and the Olympics all take place within the next few months, whilst sadly it looks as though the World Cup will be postponed.

Either way, I cannot wait to watch the action. I remember watching the 2014 Women's Rugby World Cup and being inspired by the Red Roses, who won the tournament that year.

It was the first female game that I watched and I loved seeing the girls be so ferocious in defence and their ‘don't care attitude’ light up the pitch. Back then, I didn't really know women played as you couldn't access it very easily which was disappointing.

Fast forward seven years and we're seeing a lot more international games televised and you can stream some of the Allianz Premier 15s for free. We're not there yet, but we're seeing a rise in viewing figures and greater females present/commentate on major fixtures, which is blooming marvellous.