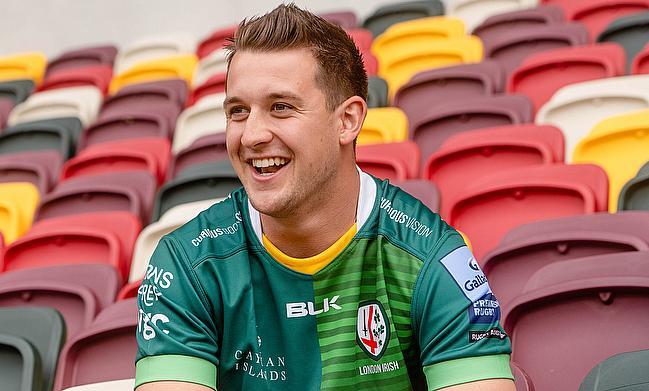 “Tom Pearson has got a deadly out-swinging delivery, Jacob Atkins goes a bit too fast, so you have to bring him down a level and then one of our sports scientists, Ben Cousins, he is a very dangerous bowler when he gets his line and length right,” Tom Parton laughed.

A chat about London Irish’s best indoor cricketers in some ways explains exactly what the club’s day to day environment is like. Players enjoy one another’s company, having a knock after training is finish, the group engaging in a different way around the Hazelwood training facility.

England have just brought up 500 runs in Barbados, the fourth time they have done so in five years, but London Irish’s hunt for a significant achievement has stretched on far longer.

It was in the 2008/09 season that the club last found themselves in the Premiership playoffs, their third-place finish under Toby Booth, before beating Harlequins in the semi-final, led to a date at Twickenham, where a narrow 10-9 loss to Leicester Tigers followed.

For the Exiles the future was bright, with youngsters Delon Armitage, Steffon Armitage, Tom Homer and Alex Corbisiero all in the mix, Mike Catt pulling the strings at fly-half and Bob Casey skippering the side.

But 2009 would be the peak for the club, a slow decline coming in the years that followed. Two relegations would come, the most recent in 2018. It was at that time the foundations for the years to come were laid, Declan Kidney parachuted in as Director of Rugby.

At this stage of the Premiership season, the club sit sixth in the league table just three points away from the top four. Should their ambitions of seeing the postseason hold any weight, a win against Northampton Saints this Saturday at the Brentford Community Stadium would be a welcome one.

Parton made his first appearance for Irish since last December, a hamstring injury against Wasps leading to the 24-year-old spending an extensive period of time on the side line.

Starting at full-back against Harlequins in the Premiership Rugby Cup last Friday night, the Academy product scored a try in a 34-19 win over their London rivals.

The game against Northampton Saints on Saturday is the team's St Patrick’s Day celebration, the first time that the club will have hosted the fixture since their move to their new home.

“It is massive for the club,” Parton said. “I remember going to St Patricks games when I was a kid and it was a great event, a great show, but ultimately it is about us winning and performing on the day.

“It is great that there are so many things going on around the stadium and it is a really great spectacle for everyone around the area to come and experience. Ultimately it is about us winning to make it a great day and we will be hoping to do that.

“It is a great event, great for the family, it is kind of everything that we are about as a club. In four or five hours you can feel that and experience it.

“It is a game that the boys pin down in the calendar and get excited about. We get new kit and all that sort of stuff, so it is exciting. We will be looking to do the job, get the win and make sure it is a great day instead of an okay day.”

With street vendors aplenty surrounding the Brentford Community Stadium, there will also be live music, merchandise stores, a series of entertainment and activities, as well as giveaways and more, it is a day that will be fun for all the family, as well as anyone else making their way to Kew Bridge.

When Parton sustained his hamstring injury, it came at a time when plenty of the club’s regulars found themselves similarly out of action. Short term signings were added by Kidney and his staff, whilst offseason recruits also stepped up.

In that time, Kyle Rowe received a maiden Scotland callup, as did Ben White, whilst Lucio Cinti, Juan Martin Gonzalez and Olly Cracknell acquitted themselves well, and have lent themselves well to the cause.

With only five games to go from now to the end of the regular season, every game for the Londoners a cup final if they wish to scratch that 13-year itch.

“It has been great to see the lads go so well these past couple of months,” Parton said. “I think the brand of rugby we are playing is really good and it is suiting us, and we have got players that are playing really well at the minute and are firing on all cylinders.

“We are finding a balance to our game now, whereas in previous years we haven’t found that. The boys are going really well, but obviously I am super excited to get out there and get stuck into is and help the team in any way I can.

“If you look at the top of the league teams and championship winning teams, depth is a key thing that they have. In previous years, we may not have had that, and we were just relying on individuals to go out week in and week out.

“I think it is great now that the club is in a place and in a position where it kind of doesn’t really matter who is in that XV or 23. Anyone can fill in and do the job that is required.

“That is credit to the coaches and the Academy setup, that players are comfortable and feel like they can perform when they are required to. It is really exciting.”

One of numerous players currently in the first team squad to have graduated from the club’s Academy. Parton is just one, the full-back having joined the club after a trial whilst at Wellington College, making his first team debut just four years later.

It was also during that time that he spent time on loan at Henley Hawks, the pathway of playing in the National Leagues a strong one for the Exiles.

Good Luck to Tom Parton today in the @WorldRugby U20 Championship Final.@EnglandRugby U20 -V- New Zealand U20. From all @HenleyHawks pic.twitter.com/zY6C4IkFbJ

Now a senior player, Parton is watching on as this new generation go on the same journey he did.

Alex Harmes and Monty Bradbury are following more closely to the 24-year-olds footsteps, the pair calling Dry Leas home and gaining experience that will last their senior careers.

“I think the key thing when you’re young is just to play and no matter what the level is, it is just to play, try things, fail, learn from that and go again,” Parton said.

“The one thing I really advise and push to the younger players, that you need to be playing, because no one wants to be holding a pad and just be training from Monday to Friday and not play on the weekend.

“I think it was massive for me, in terms of my development, playing 20 games for two seasons and then building up what men’s rugby is like, and then getting a chance with Irish in the Championship that year. I think that’s the main thing, just playing.”

A distinct difference the London Irish of years gone by is this one has an identity. During the club’s years wandering at the foot of the Premiership table, there was a lack of homegrown talent attached to the side.

In years gone by, Anthony Watson, Jonathan Joseph and others had left the Exiles, the close ties to the green shirt not present, as the side brought in a host of talent from other Premiership clubs and from further afield.

“I think it is really exciting,” Parton said. “We do have little moments where we are in the changing room, where it is after training and there are the academy boys sticking around and I remember the other day, me and Matty [Williams] were playing some indoor cricket and there was around six or seven Academy boys and we just looked around and were like ‘this is quite cool’.

“It is a bit of a different place that I am in now, that I get to help the younger lads out, and if there is anything I can do to help them or anything that I can say that is going to influence them, then I take a lot of pride in that. If I can influence them in any way, that’s quite big for me.”