Tom Curry: It's a huge occasion for South Africa so massive, massive understanding for them 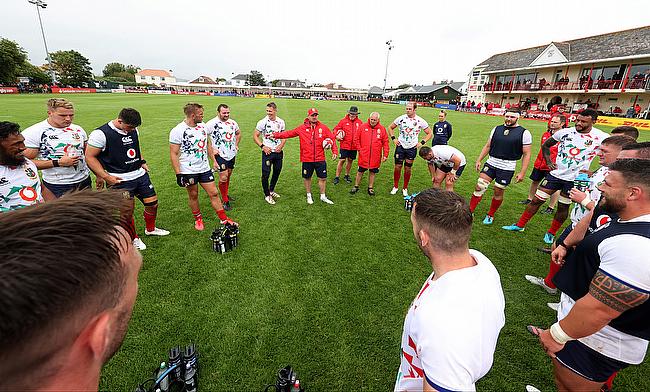 “Everyone is talking about how big it is for the Lions, but for the South African players who only get to do this once every 12 years, it is a huge occasion for them.”

Tom Curry fielded questions from the media on Tuesday as the viability of the British and Irish Lions tour was once again thrust under a cloud of uncertainty.

Covid-19 outbreaks within the South Africa squad and at provincial side, the Bulls, means more question marks have been raised about whether the Test series against the world champions will take place.

For now, the Lions are set to play the Sharks on Wednesday, but their scheduled fixture with the Bulls has been postponed with a view to rescheduling or to accommodate an alternative opponent after four players and one member of staff returned positive tests.

In terms of South Africa's own preparations, their clash with Georgia on Friday is also in the balance after the entire 46-man squad were forced into isolation after second-row Lood De Jager tested positive.

However, the situation has been further complicated after four additional positive tests among Springbok players (Marvin Orie, Frans Steyn, Handre Pollard and Frans Malherbe) plus six among management, including head coach Jacques Nienaber, were recorded whilst Georgia also had four positive results among the team.

?? Bok training has been suspended following a positive test in the squad
?? More here: https://t.co/W5kxwLVVUr pic.twitter.com/tjmKWxH1aO

"It's not people's fault if they catch Covid, to be honest, so huge understanding for them," added Curry, who will make his Lions debut tomorrow evening.

“I guess we have been in bubbles before with the Six Nations and Autumn Nations and there has been relative uncertainty about games so it kind of almost feels like the norm now. You have just got to prepare normally. As we have said, you get your body ready and you get yourself ready to play and if the game is there, brilliant you are ready to go, but if it is not, we crack on to the next one."

Whilst Curry and his teammates focus on the Lions' second match in South Africa, defence coach Steve Tandy admitted contingency plans were being discussed before the Bulls match on Saturday was officially put on hold.

“We’d weigh up if we need to give the boys a day off, if we need an internal match or a heavier loaded contact day,” Tandy said.

“Through Covid, you learn that you need to adapt. You can have the best laid plans, but things move really quickly and change. It’s about being prepared for whatever comes our way at whatever moment in time.

“Whatever the group needs, whether it is more contact or an extra day off for recovery, we’ll just adapt to that as we go.”

The possibility of fully cancelling the match against the Bulls would mean 80 fewer minutes for players to put their hands up for selection in Warren Gatland's Test side.

After injuring a chest muscle lifting weights in the gym, Curry's wait to pull on the famous red jersey will come to an end on Wednesday evening when he lines up in a dynamic back-row which includes Josh Navidi and Sam Simmonds whilst the impressive Tadhg Beirne will be utilised off the bench.

The fight for positions in that area was highly anticipated before the tour, with Gatland also highlighting the battle in the back-row on Monday, but Curry sees competition for places as a major plus point for the Lions.

“I think it is the same for every single player,” he added. “Selection has been going on for four years so I think it is the same for everyone. It is not like people are getting more [game time] or less at the moment. I think selection is for you guys to speak about and for me, it is about doing what I love and playing for a team I have dreamt about.

“It is all about taking your moment in training and ultimately tomorrow, but it is a team sport. Hopefully we have a good game tomorrow as a team and get the win. Whatever happens at the weekend, happens.

“Everybody who has played has played well and I think that is the brilliant thing about the side at the minute is the competition so I can’t wait to get my opportunity, especially with Simmo and Navidi. They are both unbelievable players so it should be really exciting.”

Here's our line-up to face @TheSharksZA on Wednesday ??

Curry revealed Navidi - or ‘Navicii’ as his teammates have dubbed him - has been teaching some of his fellow squad members how to DJ, but for the Sale back-row, he will be hoping to be on song when he makes his Lions bow in Johannesburg on Wednesday.

The 23-year-old’s first real taste of international rugby came in South Africa three years ago and having also faced them in the 2019 World Cup final, Curry has taken a lot of lessons from playing the Springboks.

He added: “It was a massive experience [playing in 2018] and one that I still hold pretty tightly now. It is was my second, third and fourth Tests and I think I took a lot from that, not just the cultural side of it off the pitch, but I guess the cultural side on the pitch and what it is like to play in South Africa especially at Ellis Park in altitude in the first game!

“It is a bit weird not having the fans, but in terms of the rugby side, I think moving forward, the contact area will be a hugely contested area and one that probably needs to be won.”