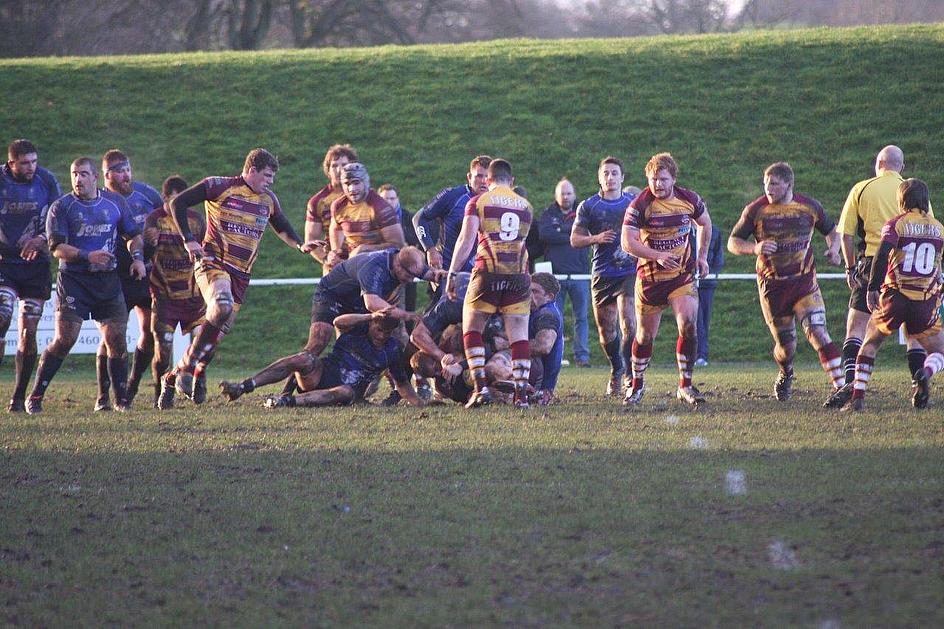 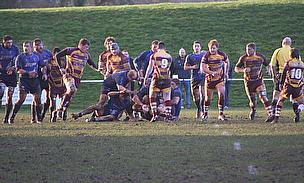 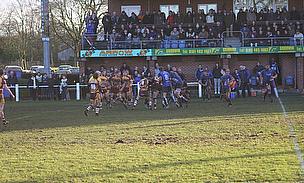 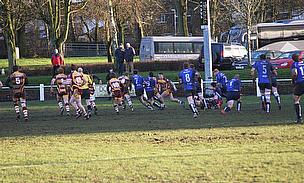 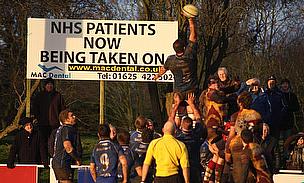 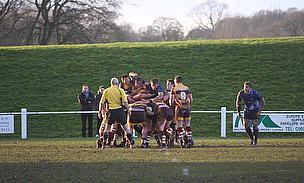 On the road again this weekend to follow the very best rugby union. The TRu team headed to league leaders, Macclesfield for their table topping match with Sedgley Park.

The Sedgley Tigers website thought this game was best described as "a game of two halves".

Truthfully that does not adequately describe the game. The win allowed the Tigers to take the bragging rights in National League 2 North.

The Tigers pack has been a revelation this season and Macc were well aware of this threat. Coach Wappett had clearly done his homework, some of which was revealed on Macc’s website mid-week. It looked like the Macc boys had trained on the pitch Tuesday and Thursday in an effort to create a heavy and sloppy surface. The surface at the scoreboard end was to have a massive influence on the game. Infact, Macc without the aid of that surface, were unable to score in the 2nd half.

Ultimately, it was not the Sedge pack that won the game, it was the little General who is Steve Collins. His performance throughout was the difference between the two teams; he is always a willing defender but with the ability to turn defensive lines into attack.

There was a large travelling supporters group and they were a constant encouragement. The home side were able to keep the away supporters quiet for only 20 minutes of the game. Macc came at Sedge all guns blazing in the first 10 minutes.

In front of the electronic scoreboard the Macc pack applied immense early pressure. A heavyweight pack on a sloppy surface was a tough proposition for the lighter Tigers. Macc set their scrum to attack the Sedge tighthead and the opening scrum by the home team on Tigers ball was withering; as they attacked the Tigers tighthead. The Sedge front row is made of sterner stuff this season and it was to be the start of a fine game for James Flynn.

The Tigers website reported that "at this early stage the omens were not good and not long after following a mistake from Jamie Harrison in the Tigers 22 resulted in a scrum for Macc. Great set and even better push had Tigers pack heading towards the try line. Good hands at base had Ryan Parkinson in for his first try."

This gave Macc huge encouragement and they looked stronger, quicker and more aggressive in every area of the game. The Tigers pack manfully tried to hold them back. It was all hands to the pump and the Tigers hooker was overheard to say he couldn't see; and at the next scrum he struggled to hook on his own put in and the Macc pack took it against the head and scored powerfully.

Still complaining of being unable to see Matthews left the pitch, presumably for an eye test and new contacts. This saw Macc facing a Tigers pack, that were pushing them around through aggressive scrummaging by loosehead, Max Ashcroft and a hooker who could now see!!

A series of kicks to the corner and great line out work had the Tigers parking along the Macclesfield try line.

Macc looked in trouble at the resulting scrum and the Sedge pack showed all their skill to deliver a perfect ball and "patient half back play from both Callum McShane and Steve Collins probing the home defence but waiting for the right space was telling.

With the move heading right suddenly an overload on the opposite flank was seen by Steve Collins and this was exploited with runners and then for Richard Wainwright to race over for try number one.

Macc from the re-start saw Sedge’s Collins put in a very poor counter kick; handing possession back to the home side. They executed their lineout expertly what happened next was a top drawer demonstration of forward play as the Macc pack, with a series of pick and goes, drove the Tigers all the way back over their try line for Dave Marwick to dot down over the line for try number three."

The home crowd felt that this was still a close game and it was clear that Macc needed to put in a solid second half to ensure a win. Whatever was said at halftime did the trick for the Tigers, as straight from kick off Sedge and in particular Steve Collins decided to play in a more assured way.

Tigers had in the latter stages of the first half got to grips with the Macclesfield scrum and that was no mean effort said the Tigers website. Early in the second period Ben Black replaced Max Ashcroft, who had a good game at loose head prop. Black found himself up against Maccs replacement tighthead, Jean-Francois Bester. In after match interviews both coaches acknowledged that these two changes negated the scrum battle that had warmed the crowd in the first half.

These changes by both teams in the front row stabilised the battle in the scrum, with far less ebb and flow. Both sets of halfbacks now had more solid platforms. McShane and Collins were to win the battle of the halfbacks as they led Macc on a merry dance around the field.

The difficult underfoot conditions in front of the scoreboard allowed Sedge to replicate Maccs first half driving maul and show pack dominance; the Tigers eight pushed Macc back 15 metres for a driving maul and try with Johnny Mathews dotting down.

For the first 60 minutes of the game Matt Lamprey had been quiet and well marshalled by Macc’s Ryan Parkinson. The energy sapping pitch taking its toll on many but Lamprey seemed to get stronger and in the last 15 minutes was taking the game to Macc, punishing them with penetrating runs. Slow play by Maccs defence had a long kick for Steve Collins to narrow the score.

Macc now looking very tired and Sedge looking stronger as the game went on, were the dominant force as the hosts could not get out of their half. Bringing on  replacements with fresh legs in the shape of Liam West brought even more go forward to the game.

Maccs defence stood firm desperately keeping out wave after wave of Tigers attack. A golden opportunity to score a team try was completely “butchered” by the Tigers forwards. Nevertheless, there remained a sense that the experienced heads in the Tigers team, Crous and Riley, were going to secure a victory.

As play broke down just outside the Macc 22 a bullet of a ball from base by scrum half Callum McShane found Steve Collins he dummied his cover defence then found the gas men for Jamie Harrison for try number 3.

As Sedge went again once again the Cheshire men tried to stand firm. Relentless work by the Claret and Gold drained the home defence so much so they strayed offside.

Man of the match was Steve Collins but there was some great performances all round. The game had changed minute by minute. The first ten minutes belonged to Macc but after that it was all the Tigers. Macc will be disappointed with their inability to produce an 80 minute game; the visitors will be delighted that they played the full 80.