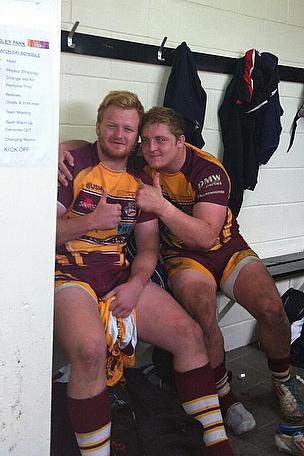 "This was a great game of rugby today with the Lions pushing Sedge all the way. SSE NATIONAL LEAGUE TWO NORTH - Sedgley Park 38 (5) Leicester Lions 33 (2)" was the headline on the Sedgley Park website.

The Rugby Paper and Leicester Lions saw it slightly differently, claiming that uncontested scrums from the 51st minute changed the game. At the point the scrum went uncontested it appeared that Sedgley were cruising and looking a certainty for the five points. The Leicester Lions showed great skill, spirit and determination to push Sedge all the way in a narrow win for the home club.

The first half was a game of high tempo and intensity as both clubs matched each other with well worked tries. Sedgley fullback Richard Wainwright scored a try within 90 seconds on the left flank. This had the visitors on the back foot but that did not last for long, with Robert Young bursting through for the Lions.

The Tigers back row has started this term very strongly and Matt Lamprey, who was Man of the Match versus Chester, did what he does best, bulldozing down the first up defences to run in try number two.

The Sedgley website claimed "the defining moment of the half came just on the stroke of half time when Sedge in the shape of winger Andy Riley crafted a well worked third try as he danced through the Lions defence to put distance between the two sides."

Tigers blitzed the opening phases of the second 40 with another two quick tries and the very accurate kicking from Steve Collins nudging the score into what was looking like being an easy five point win. A very powerful run by prop Max Ashcroft, showed the dominance of the home side.

The first and opening try came from another blistering solo run straight at Lions from Andy Riley, with Callum McShane supporting very well offloading to Jonny Bishop on the shoulder as he went through the posts for Tigers bonus point try. At this point, young prop Ashcroft looked in huge discomfort. He was replaced by Crous but following a nasty first half injury to Ben Black, the Tigers were without two recognised props. With uncontested scrums the Lions gained the momentum and were back in the game when Young was driven over for a try.

The fifth and final Sedgley try came when captain Juan Crous added power to the pack and a huge withering driving maul saw Johnny Mathews over for the last try; Steve Collins converted.

This score looked like it could have done a disservice to the visitors who played a very good game, equipped with a clever fly-half who chipped or dummied, always probing the Tigers defence looking for chinks and finding them.

With the momentum the Lions took full advantage scoring two well worked forwards tries and a clinical finish from the back line to give them five tries but they ended up trailing by five points.

Lions deserved the additional two points and in other games and on another day would have had all five points.

National 2N is going to be a fiercely competitive league this season and Saturday’s results echoed this with joint leaders Macclesfield and Stourbridge only gaining narrow victories.

The Leicester Lions coaching team will be wondering whether the final 30 minutes was possible because of the uncontested scrum or whether they could have won the game with contested scrums.

The Sedgley management will have been very pleased with their young teams expansive game and the strength of the first half performance; but those injuries to their front row forwards will be cause for concern.