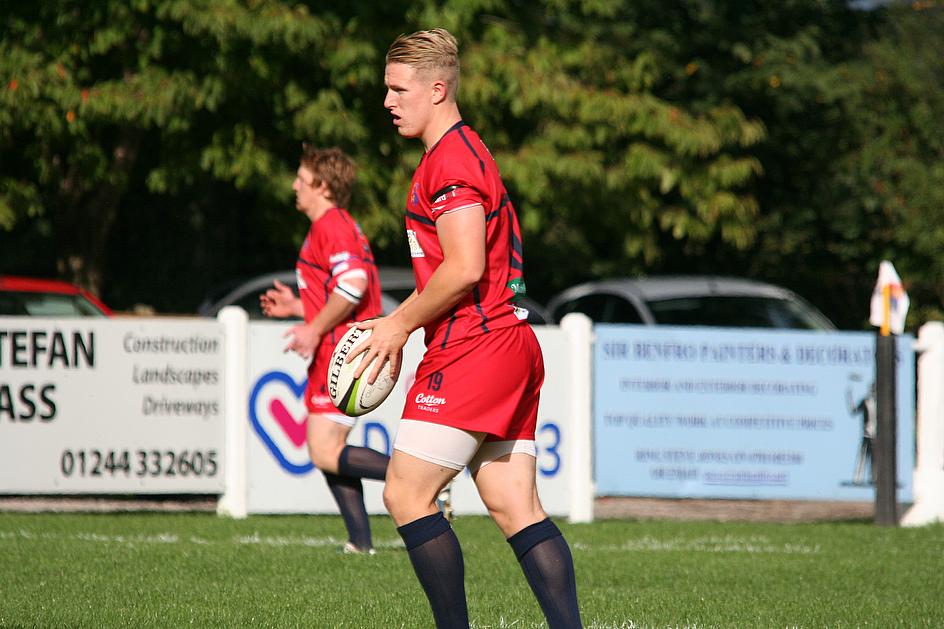 Chester prepare to kick off 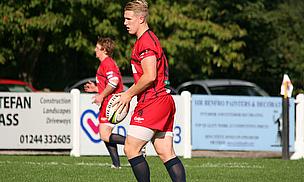 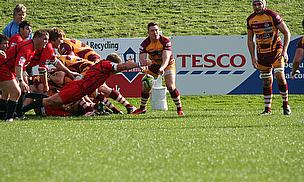 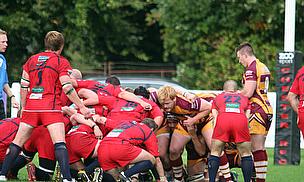 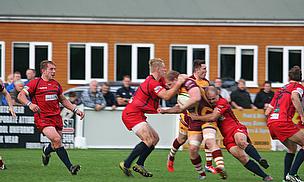 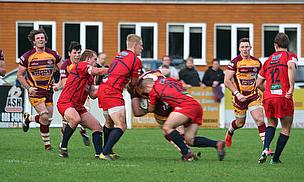 We arrived at Chester's ground looking forward to a rugby feast. Newly-promoted Chester had started the season unbeaten and were determined to keep their record. Sedgley Park had seen their season so far see-saw and rumours were circulating that Sedgley were likely to be missing influential skipper, Crous.

As they took the field both teams looked focussed on the game and the crowd were not disappointed by a blistering start by the visitors, with fullback Richard Wainwright scoring a try and Collins successfully converting.

A penalty kick each for Chester's Rhys Hayes and Sedgley's Steve Collins and it was 10-3 to the visitors. To the surprise of the home supporters the Sedgley backs were playing an expansive game and putting pressure on the Chester back row. From a line out on Chester’s 22 meter line Sedgley took the ball before Matthews powered over for a try.

A response was required by Chester and somewhat luckily they were awarded a penalty for obstruction and a series of pressure plays started to give Chester the ascendancy.

A resulting line out was cleanly won by the home team and the ball worked quickly across the backline for Tom Foden to make a lovely arcing run between Sedgley’s outside centre and winger, crossing the line in the corner. Hayes, kicking beautifully from wide, took the score to 15-10 to the visitors

Chester was looking like the team that had been making the rugby headlines and their confidence was visibly growing along with the crowd’s noise levels. Foden had clearly identified a defensive weakness and again the ball was spun across the Chester backline for Foden to find the gap between Sedgley's centre and wing. Hayes again nailed the kick from wide and the home side were now leading 17-15

The better rugby was being played by Chester and Sedgley were struggling to get any go forward. A kick back by Sedgley rolled into touch on Chester’s 22 meter line; the home club's ball.

The Sedgley second row, Lloyd, got in the air quickly to steal the ball, after which the Sedgley pack working hard and it was try time for Emmerson and conversion for Sedgley, putting the visitors back in the lead at 22-17 and that is the way the first half would finish.

Anticipation in the 350-strong crowd was high and Chester was to spend the first 20 minutes of the second half with all the territory and all the possession. Hayes, having kicked well in the first half, struggled in the second and a couple of early penalties for Chester were missed. One came from a massive collision from a quick tap and go - should it have been a yellow card?

Chester made substitutions in the front and back row, and Sedgley replaced their left winger. The changes merely increased the pressure that Chester were able to exert on the Sedgley try line. The penalty count against Sedgley was increasing and a line out close to the Sedgley line should have been better exploited by Chester but a knock on halted their progress.

However, another kick to the corner and another clean line out win for Chester created the opportunity for Andy Oakden to score and level the match.

A change in the Sedgley front row with 20 minutes to go was designed to give the visitors quicker ball and allow the Sedgley backs to get back to their creative best.

Sedgley have three very talented props to call on. Hymes and Black are aggressive and strong ball carriers with Ashcroft being expert at clearing out at the breakdown. It was quick ball at the next breakdown that allowed Parrott to beat four men and score under the posts with Collins converting.

This try gave Sedgley belief. McGowan, Waywell and Lamprey upped their respective games, and with that Chester's confidence ebbed away. A penalty from Collins took the score to 32-22 for the visitors.

The Sedgley pack, led by no.8 Lamprey, were becoming more dominant and this was freeing up space for centre Waywell to take full advantage of with a nicely taken try; again converted by Collins. It was Collins who would finish the game with another penalty kick taking the score to 42-22

The Chester coaching team will be disappointed that for 20 minutes either side of half-time they were the better team, a couple of missed penalties just failed to capitalise on their red zone visits. It is a good team and they have great facilities; a most welcome addition to National 2N.

The Sedgley Park coaches will have been pleased with the way the team performed without Crous. The attacking flair of their backs must be seen as a real plus but weak tackling out wide still needs addressing.

Being able to change the dynamic of their pack through good front row options will be encouraging and Lamprey's perforamnance at no.8 will have made their day.