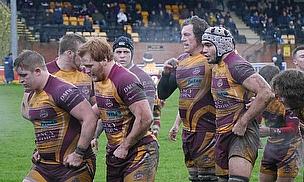 Talking Rugby Union headed up the M62, to watch a National League 2 Rugby game, between the third and fourth placed teams. Both teams determined to make rugby news and put pressure on the league leaders.

The conditions were awful for both teams with hail storms and very heavy down pours throughout the game but luckily the sunshine did come from the endeavours of both sets of players who somehow managed to make this a very good game of rugby.

Darlington kicking down the hill in the first period opened up with a high tempo phase of play asking some big questions of the Tigers defence. Sedgeley captain Juan Crous stood firm and denied DMP any space. The DMP style of play in the early phases demonstrating why at the start of the day they stood in 3rd position and are considered by many to be the team most likely to overtake Macclesfield.

A big highlight of the day was the power in the Tigers pack which began to dominate proceedings in the set pieces causing a bout of handbags in the opening quarter from both numbers 8s and some wrestling in front of our cameras. The Sedgeley front row was dominating in the scrum. DMP’s Josh Bayford was renewing rivalry with Sedgley’s Max Ashcroft. The last time the two came face to face was in the BUCS University Rugby semi final in March 2012; when Durham University powered to victory over Bath. Bayford went on to represent England students. This game, however was Ashcroft and colleagues Hymes and Matthews opportunity to show power and technique.

As Steve Collins started to fire in tactical cross field kicks for Sedgley, DMP were under intense pressure, as they had to defend their line from attack after attack by the home side The Sedgley website showing huge respect for their opponents resolve “ It has to be said DMP are not in third place in the league by default, far from it as was demonstrated with a first class rear guard action to repel the try line. Unfortunately for them such intensity does lead to momentary lapses of discipline as DMP conceded two quick penalties for Steve Collins to knock over on 11 and 22 minutes.”

Despite difficult conditions the Sedgeley pitch was holding up well and provided both teams with a surface to play rugby. The Sedgley team pulling their opponents from one side of the pitch to the other, at a high tempo. This first half was very close with the difference being the accuracy of the two kickers as DMP’s Grant Connon went to kick two penalties missing two difficult kicks in the process.

“However it was another boot that would separate the two sides and that belonged to Matt Riley who with the posts right in front off him and nothing else out wide either way wisely kicked a drop goal,” reported the Sedgley website.

The second half began very well for Tigers as the pack took the game by the scruff of the neck. The scrum was strong and the pack was starting to exert their authority in the loose. This was all an action assault, with Matt Lamprey, Johnny Mathews, James Lloyd, and Johnny Bishop being consistent ball carriers driving the visitors back.

“It was in the 43rd minute this power got its reward when Matt Lamprey finished off a great phase of forward play by picking up quick ball from the ruck to power over for the first try.

DMP struck back immediately with a penalty and seemed to have a renewed confidence. There was however a sub plot which was the performance of the Sedgley pack.

“This was best demonstrated by a massive hit from loose head prop forward Max Ashcroft that not only had a crunching effect on the DMP player but it also highlighted the will and desire from all the Tigers fifteen on the field to take the game to Darlington. This was not for the faint hearted,” reported the Sedgley website.

“It was in effect all Sedge at this stage as they pinned down DMP into the corners working them over with multi phases of forward play supported by good back play. If Sedge were determined to win this game, you have to give great respect to the discipline and composure of the DMP defence in the shape of number 8 Jack Alcock, flanker Rory Duff and second row Gary Van Den Dries who seemed to be at every breakdown.

However the pressure built by Tigers was to pay off once again in another series of powerful phases of play this time on the right hand flank, which saw hooker Johnny Mathews with ball in hand heading for the try line that combination has only one outcome. Try number two on 63 minutes.

Steve Collins kicked the conversion,” was how the Sedgley match report saw the closing stages of the third quarter.

The home crowd seemed to feel the game looked safe and in the bag at this point. The light was beginning to fade and the weather was starting to close in; the influential McShane and Ashcroft were replaced. The DMP voices around the ground summoned up huge support for their lads and DMP piled forward. The referee was becoming frustrated at the defensive ploys of Sedgley and for ‘not rolling away’ issued a yellow card. To whom we were not sure but bizarrely asked Steve Collins to walk to the naughty step which handed the initiative to the visitors who took full advantage. Correct decision but probably the wrong man but importantly it was Collins who had been the go to man with his pressure relieving kicks.

That now fell to Riley who was finding it difficult to get the ball in touch and In a whirlwind final 7 minutes DMP speedy backs and in particular centre Cameron Mitchell who had looked dangerous all game took full advantage. It was Mitchell who got over the line to score DMP’s first try.

DMP cranked up the intensity cheered on by a large travelling support the scent of a smash and grab win against the odds was there. The weather hit its worse and Sedgley were unable to kick clear. This allowed a constant wave of DMP attacks. With only 14 men the home side’s defence cracked and replacement Andy Smith went over out for DMPs second and final try on 78 minutes.

The last two minutes required cool heads and it was Sedgley pack that hung on to the ball to take a massive win against a very accomplished DMP. A very good game played in very tough weather conditions; the Sedgley pack providing a first class performance.