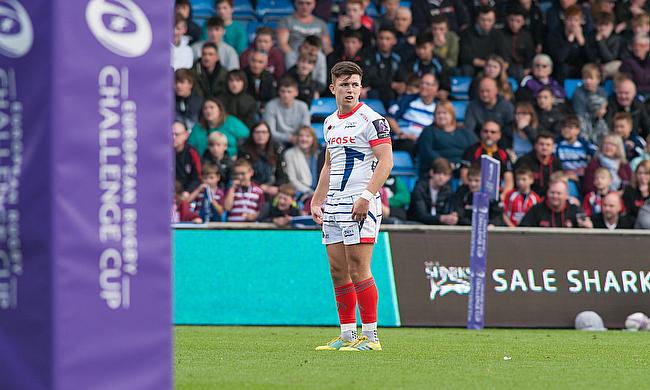 "Unforgettable" England experience can be a catalyst for Olowofela
Tom Fawcett out to impress at Worcester after a memorable year
From Plymouth via Hong Kong and France, Matt Worley is ready to take his chance in England
Paolo Odogwu reveals why Sale Sharks was the perfect fit for him after Leicester Tigers axe

From beginning his rugby journey at Kirkham Grammar School to an eye-catching display in Europe, Kieran Wilkinson is starting to turn heads.

Sale Sharks’ 19-year-old fly-half is one of the latest talents to be showcased by the Manchester-based club. After making two starts in the Anglo-Welsh Cup last season, he was handed his first major opportunity at the beginning of October. Back to back appearances in the Challenge Cup were followed by consecutive games in the Premiership Cup as Sale’s season begins to click into gear.

It’s been a month which Wilkinson won’t forget in a hurry and his recent display against Perpignan stands out from the rest, as he helped guide Sale to an excellent 41-24 victory in the south of France.

Reflecting on the last five weeks, Wilkinson said. “I guess it has gone really well. I have been given opportunities and I think I have been able to take them. Dimes [Steve Diamond] seems to be happy with me. It has gone well and I’ve really enjoyed it.

“It is a massive confidence booster, really. Knowing the coaches have got your back and they are picking you on a consecutive basis is really good. Rugby is about confidence so it has helped me.

???? @SaleSharksRugby are set for their French adventure as they visit @usap_officiel in #ChallengeCupRugby in just under an hour

19-year-old @wilkyxwilkinson gets the start at fly-half and @fafdeklerk is back from international duty. How will Sale fare tonight? ?? pic.twitter.com/SbpyA3CeSt

“Playing in France was a completely different scenario and at my age, you don’t get many times to do that! I really enjoyed the experience and the same against Connacht in Europe.”

His recent opportunities arose following the news of AJ MacGinty’s shoulder surgery (which is set to keep the American out until the new year) and it looks as though Wilkinson has made the right impression at the AJ Bell.

“It [gaining opportunities] is huge,” Wilkinson told TRU earlier this week. “Sale is a really good place to be at the moment. The young players are getting a lot of opportunities to show what we can do and it is up to you to take those chances and I hope I have done.

“It is part of the development and we are all young so it is always great to get the opportunity early so we know what it is like when we do get another chance.”

For now, Wilkinson has Premiership Cup games against Worcester Warriors (where he kicked his first points for the club), Saracens and Leicester Tigers under his belt and after also gracing the European scene, the skilful back is experiencing the big stage once again.

Whilst progressing through the ranks in the Sale academy, Wilkinson was selected for England's U17s and was also in the U18’s squad for this year's Six Nations as well as being involved in recent tournaments in France and South Africa.

It’s evident, more so after his recent displays for Sale, that Wilkinson is comfortable when the pressure is on, but he will be the first to admit that his nerves were jangling when he took part in a kicking session alongside his hero.

During his time with England at U17 level, Wilkinson shared the training field with World Cup winner and namesake Jonny Wilkinson. “It was really overwhelming, but you had to keep a calm head," he said. “You just wanted to learn from the master and it was a moment in my career that I won’t forget for a long time!

“With England, it is massive to pull on the white jersey. Every player wants to do it. You don’t get many chances in the white shirt so it is a massive honour to play for them and again, you just want to take your opportunity.”

After spending some time with England’s record-points scorer, Wilkinson has gained some wisdom from one of the greats of the game, but his current club environment also allows the young fly-half to learn from some quality players.

Wilkinson wasn’t at Sale when Danny Cipriani was plying his trade in the north-west, but he revealed that watching the 31-year-old only increased his hunger to succeed. And even now, with the recent acquisition of Currie Cup winner Rob Du Preez alongside the likes of Chris Ashton, Faf De Klerk and James O’Connor, Wilkinson is surrounded by some of the Gallagher Premiership’s star talent.

“I wasn’t at the club when Danny was there, but just watching him in the stadium in a Sale shirt, it did make me want it even more, I guess,” added Wilkinson. “But now, we do have Ashy, Faf De Klerk, James O’Connor etc and they are all massive names in the squad. You are just trying to pick loads of little things out of their game to try and add them to your bow.”

Wilkinson's development isn’t just based around Sale’s first-team, though. He has also made a handful of appearances for Sale FC in National One this season which, over the last few years, has given some of the academy players a chance to gain experience as well as game time.

The Curry twins (Tom and Ben) as well as Luke James, Paolo Odogwu and Arron Reed are just recent examples of players who have appeared in the National Leagues whilst also being on the books at the Sharks and Wilkinson feels Sale FC is a good place to continue learning.

He added: “It is a great way to help your development. Sale FC are so close with the Sharks set-up so it is good to take that step into National One. The club is coming on leaps and bounds after getting promoted from last year, so it has been really good to play at that level.”

Following a breakthrough month and with National League rugby on the side, Wilkinson is now keen to build on a very encouraging start to the campaign.

Asked what his aims were for this season, Wilkinson concluded: “It is about getting better every day and taking everything in. I can’t get too ahead of myself, but I just want to keep learning. It is a big thing for me.

“It is about playing well and learning as much as I can. When I get given the chances, I do need to take them. I am hoping to get in teams and if that happens, it is just about taking those opportunities.”

He has certainly taken his chances up to now and a fly-half by the name of Wilkinson is starting to emerge once again.