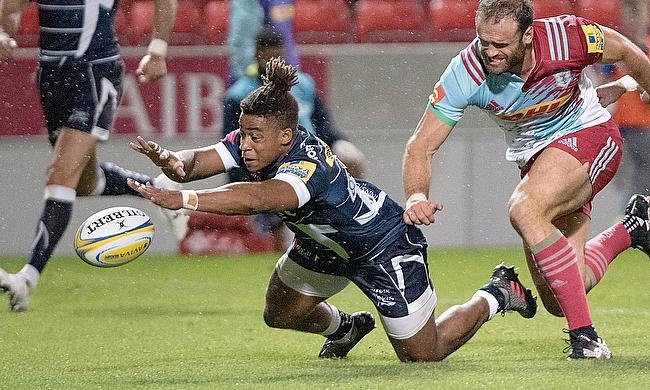 TRU spoke to winger Paolo Odogwu about his move to the AJ Bell stadium, his time at Welford Road and being compared to Jason Robinson.

Quite how Leicester Tigers allowed Paolo Odogwu to move to Manchester is something they may have been mulling over at the start of last month.

October 1st 2016 is a date Odogwu will always remember. He recalls scoring his first Premiership try for Sale Sharks against the club that released him in the summer. “To score against Leicester was nice! It was special as it was my first try.”

Odogwu knew his time was running out with the Leicester Tigers earlier this year and he was fully aware that he had to contemplate a move away from the club he joined as a 14 year-old if he was to continue his career.

“Leicester had said to me that they had too many players in my position,” he says. “I wasn’t really going to get a look in.”

With his only one chance at Welford Road coming as an unused substitute and after being sent out on loan to National One side Loughborough Students, Odogwu knew the next chapter in his rugby journey beckoned. The next step saw him travel to the north-west.

“I headed to Manchester and met up with Steve Diamond,” says Odogwu who has now started nine of Sale’s last 11 matches and is now a Manchester Metropolitan University sports scholar.

“I knew after just speaking to him that Sale was the right fit for me. They have a big history of bringing young players through.

“Mike Haley, Sam James and even Josh Beaumont have all been given their chance and have taken it and I thought it would be a good place for me to go. When I was making my debut, they were all giving words of advice to me because they were literally doing the same thing as me a few years ago.

“It’s good to have those young players as well as the experienced players like Dave Seymour and Mike Phillips in the side as it strikes a really good balance.”

And after making his debut against Harlequins in September, his time at Sale has snowballed for the 19 year-old. A try against Leicester was followed by scores against Toulon and Bristol which has seen him nail down a place in the 1st XV. “It was a bit of a shock when I got my first start!” he says. "Going from last year where I was playing sporadically to now where I am playing every week really does give you confidence.”

It is safe to say things have moved swiftly since Odogwu first picked up a rugby ball when he was 11 years-old. In fact, it wasn’t even a sport the Walsall-born winger had ever considered. “I always wanted to be a footballer. I moved to my secondary school – King Edward’s School, Birmingham – and they didn’t play football, but they introduced me to rugby.

“I’d never played it before, but I just happened to be quite good at it! I started playing when I was around 11 and I had the build for it. In truth, I really just stumbled into the game, but now it is my job!”

Considering he had never thought about taking up the sport, does highlight the remarkable rise of Odogwu. Three years after plying his trade on the school field, a Premiership club came knocking on the door which was an offer he could not refuse.

“I played for Walsall Rugby Club which got me into the Staffordshire county set-up which was one of the catchment areas for the Leicester Tigers,”

“I did a couple of trials with them and ended up in the academy when I was about 14. When you’re 14, you just do a couple of training sessions and that is it. When I hit 16, I moved to Leicester just after GCSE’s and that’s when I knew this is where rugby career properly began and that was quite a big change.”

It was quite clearly tough for Odogwu at Welford Road and leaving Leicester despite not really getting his chance to shine, must have been difficult. He speaks highly of his time with Loughborough Students last season, but he seems to have got the next step in his career absolutely spot on.

The 19 year-old is now becoming an established member of Steve Diamond’s side. With his excellent performances so far this term at the AJ Bell, it has not taken long for comparisons to be made between himself and former Sale winger Jason Robinson.

Odogwu laughs as I mention the comparison. “He was one of my favourite players growing up. I have watched all his highlight videos! It is great I am getting the comparison as he is one of my inspirations. If I achieve what he did in the game, I won’t be doing too badly!”

Robinson will always be fondly remembered for his part in England’s World Cup triumph in 2003 and Odogwu doesn’t hide the fact that he has aspirations of following in Robinson’s footsteps when it comes to international rugby.

“I’m in the U20 set-up for this year,” he adds. If I am not playing in the Premiership around February I will be involved in the Six Nations hopefully and then maybe go to the World Cup in the summer, but past that it is only natural to want to play for the senior team and reach the highest level.”

Odogwu is keen to focus on the here and now though. His flying start at Sale has certainly turned a few heads in the game and with that, he is enjoying life in Manchester. For any young player, taking that step into the highest tier of rugby is always tough, but for Odogwu, it seems to have come naturally. The future certainly looks bright for this emerging talent of the English game.