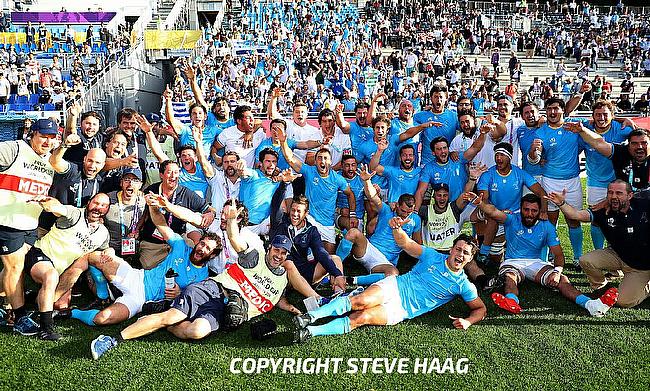 "We are preparing for this match for four years. We are a team and we win like a team!"

Esteban Meneses, Uruguay’s head coach, was conducting his mandatory post-match interview after their first game of the Rugby World Cup.

But this so easily could have been any head coach, reflecting on four years of hard work and planning for the showpiece event in Japan. However, this was the voice of Meneses and his Uruguay side were able to carve a place in World Cup folklore after the events in Kamaishi earlier this week.

Ten games into the tournament and the first shock occurred as Los Teros produced a brilliant display to stun Fiji in Pool D. The Pacific Islanders came into their second match of the World Cup following an encouraging performance against Australia, but John McKee’s side looked a shadow of the team that gave the Wallabies a scare in Sapporo.

Instead, it was Uruguay’s unbelievable spirit and determination which helped them secure their most important result in their history.

"We are preparing for this match for four years. We are a team and we win like a team!"@RugbyUruguay head coach Esteban Meneses sums up his sides historic win at #RWC2019 in perfect post match interview #FIJvURU #RWCKamaishi pic.twitter.com/FvbGbdIxox

“I’m going to answer for everybody in this team; We all feel really happy and proud of the result,” Uruguay’s Franco Lammana told TRU. “I think it is the best moment, but we can’t and we won’t stop here. We work hard to be where we are now and it’s just another step in the process.”

Lammanna’s words encapsulate the development of Uruguayan rugby since 2015. Even as recently as last year, the odds would have been in the favour of Fiji before their World Cup clash considering they beat Uruguay 68-7 in Hartpury 10 months ago.

The Flying Fijians were in cruise control for most of that encounter, but they were simply second best on Wednesday as Uruguay’s intensity in attack and defence proved too much for the lacklustre Pacific Islanders.

Of course, an opening fixture in the World Cup is always a huge occasion but for the growth of the game in Uruguay, playing a team such as Fiji - who are a top tier two nation - isn’t a regular occurrence.

Speaking to Georgia forwards coach Graham Rowntree last week, he admitted competing against the leading teams in the world is vital for the development of the ‘so-called’ smaller nations and the same applies to Uruguay who have a limited player pool.

There is no doubt that the introduction of the emerging Major League Rugby competition in the USA has aided Uruguay’s development – with five of the current World Cup squad currently plying their trade in the league – but the professionalism implemented by Meneses since 2015 has been crucial.

Lammana added: “I couldn’t play last year, but I know the team was in a different point and we have improved a lot and put in a lot of hard work to that point to this. It is a huge thing winning against a Tier One team and more, doing it in a World Cup.

“We still have amateur players in the team, and some players without contracts for next season, like me for example. We put the national team as a priority and work really hard to improve and learn, and this four-year process has had a lot of that, and now we have really good staff working really good and better infrastructure as a union. Maybe, all that together, could be the answer.”

One of the first aims at the top of Meneses’ agenda after 2015 would have been to avoid the World Cup repechage and Uruguay did exactly that as last year, they defeated Canada to book their place in Japan.

Before they headed to Asia, Uruguay had won six of their eight matches in 2019 but ahead of the tournament, they did suffer successive defeats against Namibia and Spain which would have frustrated Los Teros. However, their ambition remained the same; automatic qualification for the 2023 World Cup in France.

To do that, Uruguay knew they would need to secure their first World Cup victory for 16 years and their opening assignment was Fiji. Their preparation and hard work came to fruition in Kamaishi as they more than matched the Pacific Islanders up front and they also managed the game superbly.

Yes, Fiji made numerous changes from the side that faced Australia last weekend but Uruguay outplayed them in all departments. If Los Teros treated Wednesday’s opener like a World Cup final, then they will adopt the same mentality and approach when they face Georgia on Sunday.

Lammana concluded: “Yes it will be like a final for us and even after the game against Fiji we said, ‘OK guys, enjoy today but tomorrow morning, we start working on Georgia.’ That is what we have done.”

A victory in Kumagaya would leave Uruguay in a wonderful position to finish third in Pool D, which guarantees qualification for the next World Cup, and after their evolution over the last four years, Los Teros are more than capable of writing another piece of history in Japan.