Japan fight back to shock Ireland 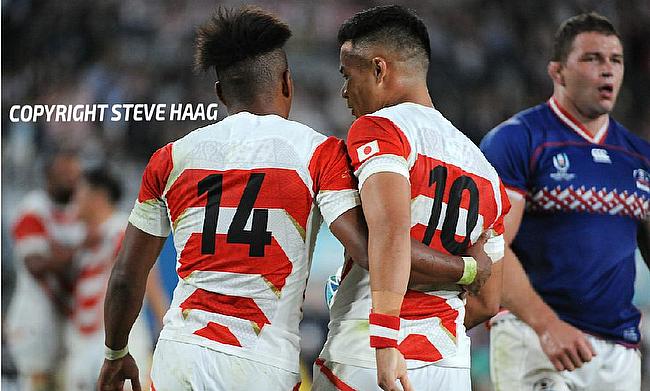 Japan played with tempo and speed from the first minute to topple Ireland 19-12 in an amazing game - Gary Heatly has his say on the Pool A match in Shizuoka.

With both teams having won their first games in the pool. this was always going to be a cracker.

When two sides with strong packs, backs who show ingenuity to find space and an all-round power game meet, you usually get a good contest and this one certainly did not disappoint with the Japanese the team that set the tone from the outset…

Japan started this game at some pace and really took the game to Ireland.

Winger Kotaro Matsushima, the star against Russia in their opener, nearly got himself on the end of centre Timothy Lafaele’s neat kick into the dead ball area, but Irish winger Jacob Stockdale was there to tidy things up.

Stand-off Yu Tamura then missed a kickable penalty, but if Ireland did not know they were in a game, they did now.

Having weathered that storm in the first 10 minutes Ireland started to get their phase play going in attack and they bagged the first try of the game when stand-off Jack Carty’s pinpoint cross field kick found centre Garry Ringrose, who lept highest to catch expertly to go over for the score. Carty missed the conversion.

That was in the 13th minute and four minutes later Tamura had another chance to get the hosts on the board. This time he made no mistake with the penalty and it was 5-3.

The pace of the game showed no signs of dimming and in the 21st minute Irish full-back Rob Kearney scored his side’s second try.

Carty tapped back his own dink kick into the arms of the number 15 and he dived over for a score that was given after referee Angus Gardner checked with the TMO. Carty converted and it was 12-3.

As the half hour mark approached, Japan went searching for their first try and a nice kick ahead by scrum-half Yutaka Nagare caused a few issues before Ireland back-row Josh van der Flier got back well to cover.

One of the star performers in the first half an hour was No.8 Amanaki Mafi, but they were dealt a blow when the big ball carrier was forced off injured.

Japan had a great replacement to come on in the shape of squad captain Michael Leitch and they had their tails up. A second penalty from Tamura reduced the deficit to 12-6 in the 33rd minute.

The hosts then won a scrum penalty a few minutes before the break and that allowed them to then go through the phases. Tamura added a third penalty and it was 12-9 to Ireland at the interval and it was certainly ‘game on’.

You might have thought that Japan would start the second half slower given the energy they had expended in the first 40 minutes, but not a bit of it.

Ireland knew they had to get the game back on their own terms and they won a strong scrum penalty in the 49th minute.

And they took the lead on the hour mark as quick hands out to the left saw Lafaele tip a pass on to replacement Kenki Fukuoka for the try.

The noise in the stadium at that stage was amazing and it got even louder when Tamura nailed the conversion for a 16-12 lead.

Ireland were rattled and although they started going through the phases again they could not get anything going. A fourth Tamura penalty in the 72nd minute then stretched the Japanese lead to 19-12.

Ireland knew they needed a converted try to grab a draw, but the home defence stood firm and then Fukuoka nearly scored an interception try only to be stopped by Irish winger Keith Earls. That was with three minutes left and Japan held on for a famous victory.

In the Scotland game last week, Ireland were able to impose their style of play on the game from the very early stages and while they scored a couple of tries in the first half here, they never looked like the team that was in control.

Stand-off Jack Carty started well, but was soon put under pressure by the Japanese defence and they simply could not get the field position they would have desired to bring their big ball carriers into the game.

Congratulations Japan @JRFURugby - worthy winners today with an incredible performance and amazing support. Thanks to our own fans who cheered us to the last - wonderful as always.#ShoulderToShoulder #JPNvIRE #TeamOfUs pic.twitter.com/XLlMsWnzfE

With experienced players throughout the spine of their team, you have very rarely seen Ireland rattled over the last couple of years, but they certainly were here and in the second half, they simply had no answers to what was being thrown at them.

The breakdown is an area they pride themselves on, but they were well beaten there in this contest and Pool A is now wide open with Ireland needing to bounce back quickly. Certainly with guys like Rory Best and Johnny Sexton at the helm they will not panic, but they need to get the latter back on the pitch soon.

The energy this team showed for a large chunk of this game was simply off the charts.

Ever since they starred at the World Cup in 2015 they have been building for this moment and they did not let themselves down.

When they went 5-0 behind they could have panicked, but not a bit of it. They stuck to their game plan and showed great belief in their own attack to go at Ireland again and again.

.@JRFURugby head coach Jamie Joseph speaks after his side made history by beating Ireland for the first time. #RWC2019 #JPNvIRE pic.twitter.com/vuqd1Dv3Bp

While he was on the pitch, scrum-half Yutake Nagare was superb while winger Kotaro Matsushima was a bag of tricks.

And while it was the Japanese attack that had the crowd on their feet, it was probably their defence that won them the context.

Every time Ireland tried to revert to trucking it up with the forwards and going through the phases round the fringes they were repelled, captain Pieter Labuschagne and replacement Michael Leitch leading in that regard with some big hits.

Japan will now believe they can not only reach the quarter-finals, but win Pool A with games against Samoa and Scotland to come.