The race for the Premiership Play-Offs: Who will make the top four? 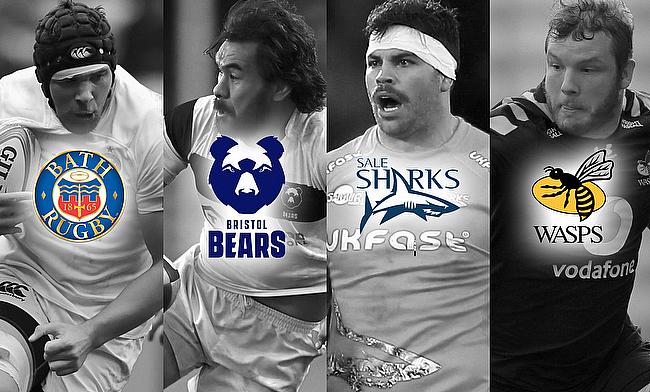 Bath, Bristol Bears, Sale Sharks and Wasps are all fighting it our for the final three Premiership play-off places
©TRU/PA

Andy Uren Exclusive: Personally I would love to get to a Premiership Final
"There are parallels with our title winning side" - Mark Cueto has high hopes for Sale Sharks
We won't waste time focusing on others: Wasps set sights on top four
Exclusive: TRU Talks - Bath Rugby Special

The final weeks of the 2019/20 Gallagher Premiership season will be dominated by one clear narrative.

When the curtain comes down on this campaign at the end of October, it may well be remembered for the Saracens salary cap saga and the coronavirus crisis rather than any eye-catching moments on the pitch.

But the forthcoming fixtures in the Premiership should allow the discussion to be purely focused on the rugby as an unprecedented term reaches a thrilling climax.

Whilst the finish line, after some debate, will be at Twickenham on October 24th, the four teams competing for a place in the final will be confirmed following this weekend’s action.

The make-up of the top four is only a quarter full thus far. Exeter Chiefs head into Round 22 in an ideal position having already secured a home semi-final, but Rob Baxter’s side still have no idea who they will be coming up against in the play-offs.

Super Sunday is fast approaching and we CANNOT wait ??

Catch all the drama LIVE on @btsport as the fascinating fight for the semi-final spots comes to a dramatic conclusion ?? pic.twitter.com/KjEY4TjYTr

However, that will all change after this weekend as Wasps, Bath, Sale Sharks and Bristol Bears battle for the three remaining play-off places on ‘Super Sunday.’

Everything now hinges on 80 minutes of rugby and with just two points separating second-placed Wasps and Bristol (5th), expect the pack to shuffle throughout the afternoon.

Wasps face the aforementioned Exeter whilst Bath travel to Saracens as the champions prepare to bid farewell to the Premiership.

Both Sale and Bristol are level on points heading into this Sunday, but it is the Sharks who occupy the final top four spot – by virtue of points difference - and Steve Diamond’s men host a Worcester Warriors side who defeated Sarries on Wednesday evening.

As for the Bears, they visit the Stoop to take on London Irish but Bristol know their play-off hopes are out of their control.

So, who progresses to the Premiership semi-finals and who misses the cut? TRU columnists Guy Thompson, Josh Beaumont and Tom Lindsay shared their thoughts with us whilst we also heard from former Bath man and Talking Rugby Union favourite, David Flatman.

GT on Lee Blackett’s influence: Lee is a really good coach. He understands the game and he thinks outside the box. When they have the opportunity to flick the switch and go, Wasps are really exploiting it, but I think the one thing which you notice when Wasps play is the enjoyment they have got.

They are playing with this smile on their face and with confidence and if something goes wrong, there is nobody having a go at each other and that breeds from not only playing well, but a culture which I think Lee is developing within that squad.

GT on Wasps’ star man Jack Willis: He is an exceptional talent, but he is not just this ‘turnover king!’ Don’t get me wrong, he is the best in the Premiership at that but when you watch his game, he gets his hands on the ball and brings people into space, carries when he needs to carry and he doesn’t really miss any tackles

When people label him as the ‘turnover king’, I think it is a bit unfair because he is more than that. He is an absolutely superb player and he is somebody for me, if you’re picking an England team, has got to be there or thereabouts.

GT on Wasps’ hopes: The final day is almost like a mirror image from a couple of years ago when I was with Wasps and we finished top of the league. We played Sarries at the Ricoh and I think Thomas Young scored a hat-trick.

Exeter have already finished top, but the difference is, they are going to have one eye on their European final as well. Saying that, whoever Chiefs start with, the drop off in quality is minimal. Wasps will not underestimate them at all and they will want that home semi-final because Wasps at home are a threat to anybody.

DF on Bath’s power: It has been a really good restart for Stuart Hooper and Neal Hatley. I think what has been impressive about Bath is obviously the way they have been winning, but also the clarity of message.

For a good while, it has been difficult to identify what exactly Bath are trying to do but I think since rugby’s restart, they have nailed it. They haven’t tried to over-complicate things which, even when I was playing at Bath, was something that did happen.

Bath identified their strengths and they have recruited well up-front and I think what the backs are doing is feeding off a highly functioning pack. I like the humility for Bath to say ‘this is what is going to win us games.’ It might not look as razzle-dazzle as some people want Bath to look, but we are going to win.

DF on the club’s next steps: I realise I get asked a lot about Bath because I played for them for a long time, but the reality is I don’t watch Bath more closely than anyone else.

However, what I would say as a neutral and just looking ahead, if you don’t evolve, you will be caught and overtaken. The case in point is Leicester Tigers. For years, they had a great pack and they fed off the back of it, but as soon as the pack doesn’t quite function, suddenly they are not as dominant and as difficult to beat.

As all these top teams do, they want to become an all-conquering team but if that is to be a dream which is realised for Bath, then one might reasonably suggest that their attack needs to develop. Having a great pack isn’t papering over the cracks. It is giving them a focus and it is working but if you look at their attacking game, the weaponry they have from 13 outwards such as Jonathan Joseph, you don’t see much of them.

Are Bath good enough to win the Premiership? Well, they can beat anybody with that pack of forwards and that is great. Who cares how you win but when they want to evolve, the attack is something they will have to look at.

If Chiefs were going to send a team to Wasps similar to who they put out on Wednesday night against London Irish, that will make Bath’s job a lot harder. We are just used to seeing Saracens perform, regardless of who they pick so your neutrals £20 would be on Saracens and Bath would miss out because I think Bristol should beat Irish with a bonus-point.

Saracens’ confirmed relegation has meant loads of the games we have seen over the last six or seven weeks would have been completely different if that wasn’t the case so whilst it will be interesting and there is jeopardy on Sunday, it is not as interesting as if all the teams involved picked their first teams.

JB on Northampton win: The five points were crucial against Northampton on Tuesday especially with the results not going our way in terms of Bath coming back against Gloucester and Wasps beating Harlequins. Bristol also got their job done on Wednesday so we know how important that result for us was for our season.

Going away from home, you always talk about getting the win first and whatever comes after that is a bonus, but this time around, we needed that bonus-point so we are not relying on results to go our way on the last day of the season.

JB on Manu Tuliagi injury: It is obviously massively disappointing news for Manu and the club. He has had quite a few injuries over the last few years and it is never nice as I know only too well, but we do have cover in that position.

Rohan [van Rensburg] played on the wing against Northampton, but he will probably go back to his natural position and we have also got Sam Hill at 12 so we are well stocked in that department. Sam James can link that back play up as well and he has been outstanding this season so we have still got a strong squad to carry on this season.

JB on the final day: In previous seasons, we have been fighting for that Champions Cup place and now we are in the mix for the play-offs on the final day. It is quite a nice feeling actually! Destiny is in our own hands, but it is how we try and put that to the back of our minds and play like we know we can do.

TL on Bristol’s chances: I think it is important to peak at the right time for any team coming towards the end of the season. I think there were questions around why Bristol hadn’t had that 80-minute performance more regularly. They have shown glimpses of absolute stellar performances, but against Bordeaux in the Challenge Cup, I think that was the closest we have seen to that complete performance despite the ebbs and flows.

TL on plus points for the Bears: What I have been impressive with is, firstly, the conditioning. All the players have had to keep incredibly fit and we saw on Wednesday new players coming in, putting on the shirt and performing well so the likes of Kevin Geary, Sam Dodge and the physios have done a brilliant job.

???'We are so close to being in the top four. Every Bristol player wants it.'

They discuss the top four, Pat Lam, his development and personal ambitions??https://t.co/3oWDlyJ92W pic.twitter.com/mpzFUmcU42

The second thing I have seen is belief. That has got stronger and the boys believe in their systems. If things are going wrong, they don’t look to pull rabbits out of a hat which they were doing a little bit at the beginning.

The last thing for me is the impact of the new players. Max Malins has been outstanding. There was a question around the Bordeaux game last week where I was asked whether it would be a big problem if Charles Piutau wasn’t playing. The answer was absolutely not because Max has experienced the big stage and he is an exciting player.

We can’t really not talk about Semi Radradra, either! Off the pitch, a few of the boys have said to me he has raised standards and, on the pitch, he is one of the best players I have seen in recent years in terms of what he can do in a game. When you have a player like that, it is very hard to defend!

TL on who can do Bristol a favour: I think the big game will be Bath against Saracens. Sarries have the capabilities to beat Bath, but Bath can throw a spanner in the works because of the way they are playing. I can’t see Saracens losing twice on the bounce and they will want to make sure they end the season with a win.