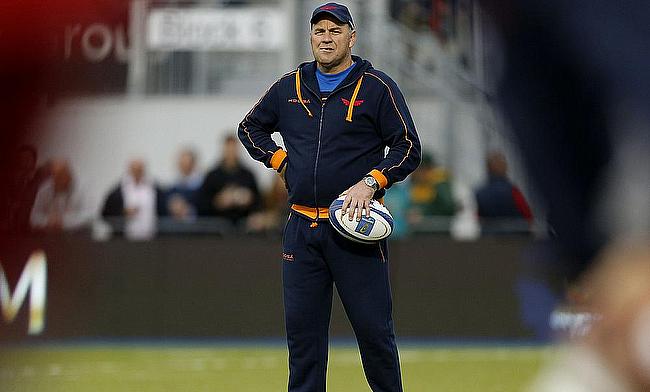 Wayne Pivac insists Wales are up for the fight as his depleted side prepare to face New Zealand in their Autumn Nations Series opener on Saturday.

The current Six Nations champions are without a host of stars to take on the All Blacks with Dan Biggar, Callum Sheedy, Taulupe Faletau, Louis Rees-Zammit, Nick Tompkins, Thomas Young and Christ Tshiunza all unavailable due to the match falling outside the international window.

The likes of George North, Leigh Halfpenny, Josh Navidi, Justin Tipuric, Dan Lydiate and James Botham are also ruled out due to injuries.

Ken Owens was initially named to start at the Principality Stadium, but a back problem for the hooker means Ryan Elias has replaced him. Elsewhere, Uilisi Halaholo tested positive for Covid earlier in the week and Liam Williams is out after having his appendix removed.

Despite the long list of absentees, Wales boss Pivac was defiant in front of the media on Thursday:” ‘The guys are really excited, but they know it’s a big task at hand,” he said.

Hooker @KenOwens1088 has been ruled out of Saturday's clash against @AllBlacks due to a back injury.

“The reality is we’re two years away from a Rugby World Cup and we’re building towards that. We’ve got a Six Nations around the corner to defend and we want to try to win that tournament again.

“I could rattle off upsets here. James ‘Buster’ Douglas and Mike Tyson. Every now and then, you do get a massive upset, but with injuries and unavailability, it’s another great opportunity for players like Taine Basham and Ben Thomas to come into the group and gain valuable experience.

“They’re going to come away from this Test match knowing what it’s like to play one of the best teams in the world. It’s every Welsh boys’ dream to play against New Zealand in front of 75,000. The guys I’m talking to in camp the last few days, the opponent they’d pick to play is New Zealand. It’s been a difficult build-up, but challenges bring out the best of people.

“To win a World Cup, you have to play against teams like New Zealand at some stage in the tournament and you have to win those games. It’s going to be a great experience for those guys who haven’t played a lot of Test rugby and they’ll certainly know they’ve been in a match afterwards.”

Pivac should have the Gallagher Premiership contingent, plus Halaholo and Williams, available to him for next weekend’s clash with South Africa, but for this Saturday, the Wales head coach has been boosted by the return of Gareth Anscombe.

The fly-half has been out for two years with an ACL knee injury whilst fellow No.10, Rhys Priestland, will make his first appearance for Wales since 2017 when he comes off the bench.

It means Anscombe will start his first Test match in over 800 days against the country of his birth. In terms of Pivac, he will be facing his native New Zealand for the first time in his Wales tenure and the Kiwi coach was quick to nail his colours to the mast.

“I am going to feel very Welsh,” Pivac added, having lived in Wales for seven years. “It feels like home. I can’t get into the other country! I’ve not seen my family for two years, but I know they’ll be supporting and watching.

‘In the role I’m doing, there are a lot of friends and family and others around the globe who are supporting Wales now. 75,000 people have also been starved of this, so we’ve got a job to do to make it a great occasion.”

Away from the on-field build-up, Pivac also spelt out the importance of hosting the All Blacks even though the match is outside the traditional international window.

The financial gains which the fixture will produce will be a much-needed boost for the game in Wales following the effects of the Covid-19 pandemic.

Pivac added: “Sometimes in rugby, you have to look at it and say the game is bigger than just one particular match. It’s about looking after the game in general. Looking at the finances in this country, without this fixture, we’d be in big trouble.

‘In terms of the rugby, it’s a massive challenge. We love a challenge. It’s a great fixture and we want to go out and prove people wrong. It’s as simple as that.”

And it will undoubtedly be a ‘challenge’ for Pivac’s charges against an All Blacks side brimming with world-class talent, including the formidable Beauden Barrett, who will earn his 100th cap in Cardiff.

From a Welsh perspective, it will also be an historic day for skipper Alun Wyn Jones who will become the most-capped player for one nation, going past Richie McCaw’s All Black record by playing in his 149th Test for Wales.

Speaking at the Autumn Nations Series launch on Tuesday, Jones said: “The pressure is always on when you play for Wales because of the level of expectation that’s on us.

“That is always the same, particularly after the spell we have had over recent years. Ultimately, it’s an opportunity for a lot of guys, and they know there are going to be more players coming into the squad, more key players back from injury in due course.

“It’s an opportunity for a lot of people to put their hand up and there’s probably no bigger game to do it than the first one we have. Being outside the window, it’s probably frustrating we can’t have access to everybody, but it is what it is.”

Wales have not beaten New Zealand since 1953, but their talismanic leader is purely focused on the 80 minutes of rugby rather than the occasion itself.

He added: “I am aware of the stats and the records. It’s one of those things. A lot of guys probably haven’t played against New Zealand.

“There are a lot of external things going on at the moment that are distractions from rugby, so it’s been nice to focus on rugby and you probably don’t get bogged down with those sorts of stats.

“We are well aware of the history of the fixture, the succession of quality players they have always had. Our focus is on performance and building on the Six Nations and the opportunity the guys had in the summer. That needs to be our focus. Obviously, the odds are stacked against us. I’ll leave those to the people who deal with the odds.”