The Man Behind the Kick 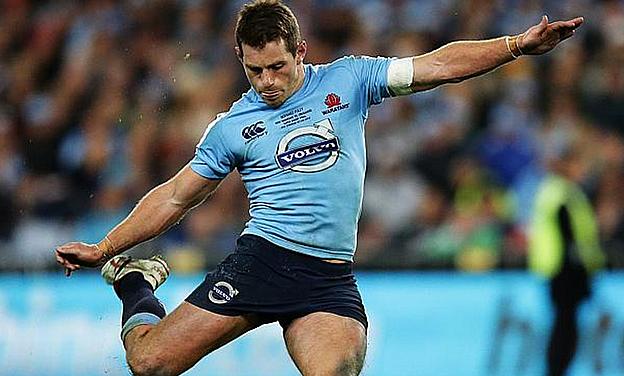 The man is Bernard Foley. Pulling the Tahs from the jaws of defeat with a last minute penalty to beat the Crusaders in the 2014 Super Rugby Final, no mean feat, but what of the man behind the kick...

“Few of us have chosen our clubs, they have simply been presented to us; and so as they slip or sell their best players, or buy players who you know can't play, we simply curse, go home, worry for a fortnight and then come back to suffer all over again.”

This quote from Nick Hornby’s, Novel Fever Pitch kind of sums up my relationship with the Waratahs.

Often feeling cursed to never actually win anything, having the ability but lacking that last breath necessary with every seasons ending, just out of arms reach…like a mirage.

The conductor of such misery was always seen as the waratahs fly half, It’s a role that has killed more careers than poorly scripted Hollywood sequels. With many players over the years fearing the responsibly that comes with wearing the number 10 on their back.

Enter Bernard Foley, A player who 5 short years ago was playing colts rugby in Sydney, studying a University degree and working part time in a series of odd jobs. Even Foley’s most harden supporter could not imagine such a rise, so quickly, considering he was not in the Australian schools set up or even an outside candidate for the Australian U20s.

In an age were players are identified from their early teens, how could one player, who is now regarded by many as the premier play maker in Australia, just 1200 days ago be considered a decent colts club fly half.

There are definitely shades of Rocky Balboa to the Foley story, picked from obscurity to join the Australian rugby 7s squad without even playing a Senior 1st grade club match.

Bernard set the 7s world series on fire, and soon became the Australian 7s captain, which can often be seen as more of a curse by some rugby players than a blessing. Playing 7s on the world circuit is a great achievement, but to compare it to the film industry it’s like being part of a hit TV series. The problem is if you’re in the 7s system too long you quickly get type cast, only being good at that craft and not possessing the skills to do much else e.g. Joey in Friends.

Bernard Foley in many people’s eyes was the Joey from friends. Considered to be that very thing a great “TV actor”, talented, but at that one thing, and certainly didn’t expect much more from him.

In 2011 after the London 7s I was fortunate enough to catch up with Foley in a cringe worthy, themed, English café with huge printed photos on the wall straight out of page 4 from the Ikea catalogue.  It was obvious after speaking with him that’s his desire was to play against the best in the Super XV.

Soon after the Waratahs offered Bernard a extended players contract, meaning that he would train fulltime with the 1st team and have a opportunity to show what he could do under at that time head coach Michael Foley (no relation).

Foley started at fullback during the 2012 season, showing in parts what he could potentially bring to the Waratahs as their chief play maker. Soon after Foley became a fan favorite under new head coach Michael Cheka. With whom both men appeared to have similar ideologies on the game: “keep the ball in hand and have a go”.

Players and fans alike have gravitated towards Foley, as he is seen in many eyes as a throw back to the era of Nick Far-Jones and Michael Lynagh.

Well-spoken, polite and humble; seeing the game as an absolute privilege to play and not just a 9-5.  Over the past few years I have had the opportunity to meet a fair few top Rugby players, I often think to myself do these guys even like Rugby? There seemed to be a pendulum swing for rugby players in Australia to use as few syllabus as possible when addressing the media and almost trying to come across as disinterested as possible.

Foley brings new energy alongside old-school rugby values that have been missing in Australian rugby, round about the exact same time the Bledisloe Cup has been missing from our trophy cabinet.