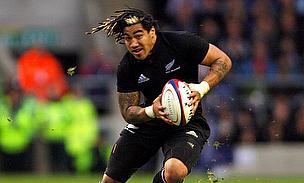 Ma'a Nonu was among the try scorers this weekend
©Press Association

Super 15 Rugby Round 17 featured four local derby matches, including two upsets with the Blues thrashing of the Force and the Hurricanes home win over the Crusaders.

The Blues have a mathematical chance of making the finals and have now helped out not only themselves, but also their New Zealand counterparts by demolishing the Force in Perth. Amazingly it was the Blues first away win in 2014. The Hurricanes had a more settled team and deserved to beat the Crusaders.

Friday night's games saw The Highlanders win at home against the Chiefs to lift them to fourth overall, equal on points with the Crusaders at the top of the New Zealand conference. The Reds beat the Rebels in Melbourne in a convincing display, even though there were without Will Genia and Quade Cooper.

The Waratahs thrashed the Brumbies in the other local derby to lift them to the top of the ladder overall and playing into the New Zealand teams' hands with both the Brumbies and Force struggling to hang in the Top Six. How unsettling the reports of coach Fisher heading to Gloucester remain to be seen.

The Hurricanes, Brumbies and Force have their work cut out for them now with Brumbies and the Hurricanes only having one match level, while the Force are now tied with the Blues and Chiefs who will all have to rely on other results to get through to the Top Six.

The Hurricanes win over the Crusaders has condensed the New Zealand conference with only six points between the Crusaders and Highlanders, and the Blues and Chiefs. That is epic and it means that there could be three New Zealand teams in the playoffs. We asked our Southern Hemisphere reporter, Scott Donaldson what his highlights of the round were.

"The Blues showed that they are not finished with yet and their first away win shows how dangerous they can be," he said.

"The Hurricanes and Highlanders won local derbies against more fancied opponents, showing that they are in contention still.

"The Waratahs showed that they are a dominant force and there is a gap between them and the rest of the Australian conference.

"Victories for the Reds, Blues and Waratahs were bigger than most people expected, but it shows that while there are always some close games, other matches can end in blowout results."

Scott also run the blog www.superrugbytips.com and for more news and views do visit his site. So finally, Scott we need to know who you reckon will make the top 6

"My picks are Waratahs, Sharks, Crusaders, Highlanders, Brumbies and Chiefs"