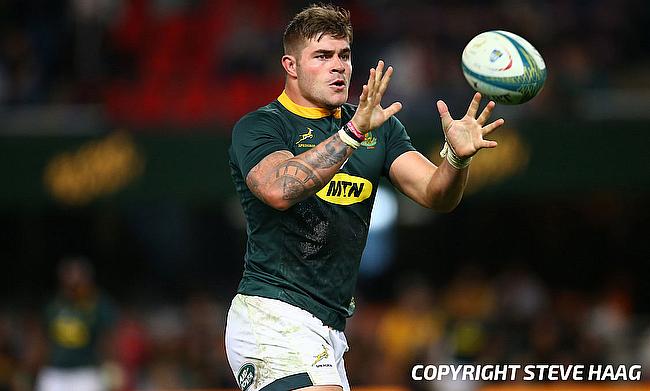 South Africa managed to bring their ongoing Rugby Championship campaign back on track after they edged out New Zealand 34-36 in the round four of the competition in Wellington on Saturday.

This is also South Africa's first win in New Zealand in last nine years as they bounced back from defeats against Argentina and Australia in the previous two rounds while Steve Hansen's side suffered their first defeat of the competition.

Beauden Barrett's poor goal kicking also added to New Zealand's woes as he missed four shots at the goal that could have taken the world champions over the line.

It took All Blacks just five minutes to get their first points on the board when Jordie gathered a pass from his brother Beauden to go over the line. Beauden missed out on the conversion but the home side controlled the game when Ben Smith made a superb line break and offloaded to Aaron Smith in the 16th minute for their second try.

This time Beauden added the conversion as New Zealand raced to a 12-point lead. However, the Boks made a superb comeback when a combination of Malcolm Marx and Willie le Roux sent Aphiwe Dyantyi over the line in the 20th minute and five minutes later le Roux gathered a bouncing ball to score the second try for Rassie Erasmus' side. Handre Pollard kicked both the conversions as the visitors took a 12-14 lead.

South Africa went further up by the half-hour mark as they managed to get their third try in the 33rd minute through Malcolm Marx that was improved by Pollard but Rieko Ioane's 38th minute touchdown made it 17-21 before the South African fly-half kicked his maiden penalty goal before the break to make the scoreline 17-24.

New Zealand would have desperately wanted a turnaround but instead it was the Boks who got their fourth try in the 43rd minute when Cheslin Kolbe intercepted a pass from Anton Lienert-Brown.

All Blacks finally managed to gather momentum and it was once again Ioane, who gathered a pass from Beauden to go past Kolbe for his side's fourth try but they were put to test when a combination of RG Snyman, Steven Kitshoff, Elton Jantjies and Warren Whiteley worked the ball well to send Dyantyi over the line for the second time.

But New Zealand did not relent under pressure as a 60th minute try from Codie Taylor brought the gap down to seven points and their momentum was aided when Willie le Roux was sin-binned in the 67th minute for taking Ioane out from an offside position.

Ardie Savea made most of the numerical advantage with a 74th minute try that was not converted by Beauden as the ball had hit the post and the Boks did well to hold on their defence to complete a thrilling two point victory.

HIGHLIGHTS: 2018 TRC Rd 4: New Zealand v South Africa
It was a real classic of Freedom Cup history, with the @Springboks scoring their highest ever points tally in New Zealand against @Allblacks, to win 34-36. #RugbyChampionship #NZLvRSA pic.twitter.com/06ibF4stTR