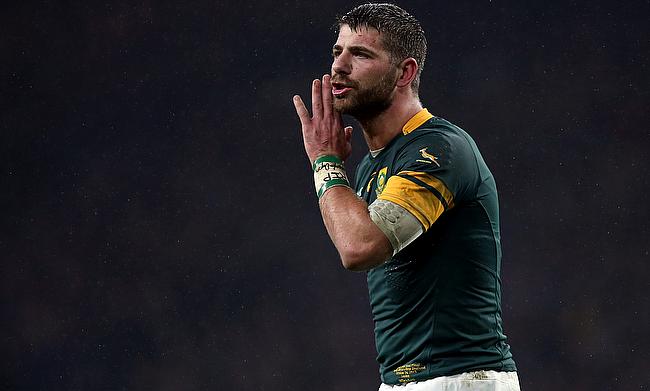 England suffered their fourth consecutive defeat as South Africa made a spirited comeback to win the first Test in Johannesburg with a 42-39 margin.

This is also the first win for Springboks under new head coach Rassie Erasmus and the two teams will now face once again in Bloemfontein on 16th June followed by the final game in Cape Town on 23rd June.

Fullback Elliot Daly capitalised on an early infringement from South Africa as he kicked a penalty goal to begin the proceedings. With the boks fielding two debutants Sibusiso Nkosi and Aphiwe Dyantyi on the wings, England tried to exert pressure on the hosts and eventually Mike Brown scored the opening try in the game in the fourth minute when he crossed over and skipper Owen Farrell slotted the conversion to take scoreline to 0-10.

The response from South Africa came in the 10th minute when Handre Pollard kicked a penalty goal but a fell times pass from George Ford found Jonny May, who in turn sent Daly over the line in the 12th minute and once again Farrell slotted the extras. The Leicester wing also played a pivotal role in setting up Farrell's converted try in the 17th minute as the red rose side raced to 3-24 lead.

After a struggling start, the momentum swung towards Erasmus' men as they managed four tries with three out of it coming in the final 10 minutes of the first half. Faf de Klerk (20'), Sibusiso Nkosi (30'), Handre Pollard (34') and Willie le Roux (39') all found their names to the scoring sheet and the fly-half also added conversions on three occasions and the teams headed into the break with a 29-27 scoreline.

Pollard restored the five point lead for South Africa with a 52nd minute penalty goal and England suffered a setback when Mako Vunipola was yellow-carded for making contact with De Klerk as he hoisted a kick. Aphiwe Dyantyi helped South Africa capitalise on the numerical advantage when he dotted down in the 64th minute but Maro Itoje's heroics in the 70th minute meant the gap was narrowed down to seven points with 10 minutes to go.