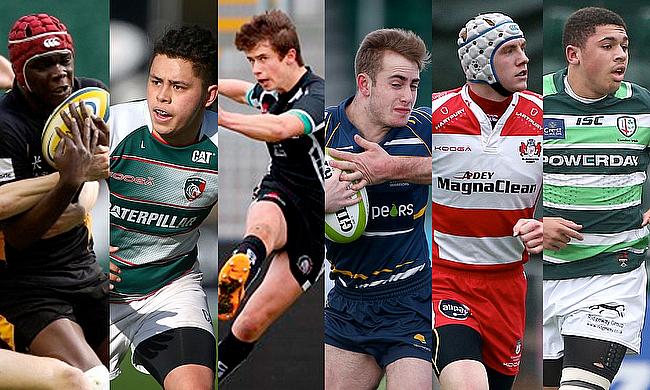 The six best teams in the Aviva Premiership academy league met at Allianz Park on Monday for Finals Day, to decide the teams’ final positions for the 2015/16 season.

Below are six of the star performers on the day, one from each team, and all are players who could have very bright futures at the U20, senior and maybe even international levels.

Just days after Maro Itoje made his bow for England in Rome, we may already have the slightly ridiculous situation of having found the ‘next Itoje’. The power and athleticism that Ehizode plays with for Wasps’ academy side is certainly reminiscent of Itoje’s early days with Saracens and the England U18 and U20 sides, where he often looked head and shoulders above the competition, both literally and figuratively.

Like Itoje, or more seasoned internationals such as Luke Charteris and Courtney Lawes, Ehizode has the height and arm length to disrupt opposition lineouts but without being gangly, still having all the power required to make a nuisance of himself with ball in hand and at attacking breakdowns. Wasps were handed a comprehensive defeat by a bigger and sharper Leicester side on Finals Day, but Ehizode was at the heart of everything that Wasps did well, including driving mauls and attacking the Leicester lineout.

Honourable mentions – Jacob Turner impressed in the Wasps pack and though outside centre Caleb Shepherd’s opportunities were sparse given Leicester’s control on the game, he is an extremely talented prospect. Unfortunately wing Matt Ilube missed the game but was a real threat throughout the academy season and deserves recognition.

The son of former Samoa international Mike, Umaga was the catalyst behind a surging second half performance from Leicester. The Leicester back line struggled to click in the first half when Umaga was at inside centre, leading Wasps by just 13-7 at half-time, but his move to fly-half after the interval sparked the Tigers and they ultimately triumphed 53-19.

His play on the gain line in particular was a joy to watch, either sending runners through holes with zipped flat passes or catching defenders unaware with his own footwork and turn of pace. Umaga contributed 20 points in the second half, including two tries, and showcased his all-round skill-set behind an impressive effort from his pack. In terms of a comparison to a senior player, there were definitely shades of Nick Evans in Umaga’s play, not least so for his ability to instantly react to what the defence were showing him and being able to shift from runner to distributor and vice versa seamlessly.

Honourable mentions – Wing Sam Yawayawa was excellent and is unlucky to miss out to Umaga. His right-to-left step left many a Wasps defender clawing at thin air, whilst his hunger to impact the game saw him come in off his wing to good effect on a number of occasions. Tighthead Jake Charters threw his considerable weight around at the scrum and was key to helping Leicester edge the set-piece battle.

Not too much went well for Exeter in their 44-19 defeat to Worcester but the play of their fly-half was certainly something to smile about. Even with Exeter’s pack on the back foot, Skinner was a consistent attacking threat for the Chiefs and looked like one of the most skilful players on show across all six teams.

His distribution was sharp and accurate and his superman-esque offload for Aaron Chapman’s try was one of the highlights of the day. Minutes later he was setting up another try with a whipped pass in front of Worcester’s blitzing defence, sending Sam Brown clean through on the try line. The instinctiveness and ease with which he played had more than a little Henry Slade about it.

Honourable mentions – Blindside flanker Sam Daly put in a good shift and was particularly impressive with his carrying, keeping himself low and breaking tackles. Declan Matthews, Exeter’s inside centre, also impressed in this fashion, never failing to break the gain line on first phase throughout the game.

Craven may have been the pick of all players at Finals Day. The full-back was immaculate with his defensive responsibilities, including positioning and dealing with high balls, and showed plenty of ambition in attack, often filling in at first receiver or joining the line as a second distributor. A strong fend saw him regularly break the gain line and his awareness and offloading skills made him a threat to Exeter’s cover defence.

Craven bagged two tries and was involved in setting up at least two more, earmarking himself as a potentially prodigious talent moving forward. As for a senior comparison, he plays almost like an Alex Goode-Ben Foden hybrid. He has the strong aerial game of Goode but doesn’t tend to run laterally, preferring to break the first tackle and look for the offload, much like Foden.

Honourable mentions – James Page, Worcester’s loosehead, seemed to scrummage excellently against the considerably bigger Exeter tighthead. Without the benefit of camera angles or being in the position of the referee, it’s difficult to say things with conviction about the scrum, but Page looked to be the strongest scrummager across all six teams. Number eight Tom Dodd also caught the eye, not just for his mammoth size but also his soft hands, which released a number of Worcester players for big gains.

Gloucester were unlucky to come up against an excellent London Irish side in fine form and they definitely deserve more credit than their 35-11 loss speaks to on paper. Tonks was Gloucester’s best player in the final and he scored a late consolation try, something which his performance certainly merited. Like many of the backs to come through the Gloucester academy in recent years, Tonks is quick, instinctive and as dangerous off the ball, running threatening lines, as he is with it in hand.

A 100m and 200m sprinter at school, Tonks has the pace to cause defences problems at senior level and already has quite the arsenal of attacking skills to make himself a prospect that Cherry and Whites fans can begin to get excited about. His speed, deceptive power and footwork make him not too dissimilar to Jonathan Joseph, albeit he is a little more direct in his approach.

Honourable mentions – Captain Joe Mullis has already been identified by England as an enticing prospect, having featured for the U18 side last season and may be one of the age-grade players Eddie Jones is keeping a long-term eye on, given his feelings about current English sevens. Otherwise, the two Harrys, Randall (scrum-half) and Robinson (wing), are both electric talents who very much fit the mould of Gloucester’s pacey back lines.

The versatile back rower was exceptional in Irish’s 35-11 victory, proving himself to be one of the modern breed of loose forwards, capable of carrying, tackling and impacting the breakdown and set-piece all to a high level. Rugby is slowly moving toward a future where those traditional archetypes in the back and second rows are fading away and multi-talented and athletic players like Curtis-Harris will be worth their weight in gold.

Whether utilised as a lighter, more mobile eight or a dynamic blindside, Curtis-Harris’ future looks bright at Irish and age-grade level. Having already represented England at U17 level, U18 and U20 duty beckons if he continues to play like he did on Finals Day. Given the well-rounded skill-set and work rate he plays with, Ireland’s CJ Stander seems an apt comparison.

Honourable mentions – The size of wing Joe Cokasaniga has to be seen up close to be truly appreciated. Throw into the mix his speed, footwork and relish for the physical side of the game and Irish have quite the player on their books. Full-back Will Attfield, loosehead Jarod Leat and flanker Jack Cooke also caught the eye, but you could legitimately name any of the Irish XV, such was their performance on the day.