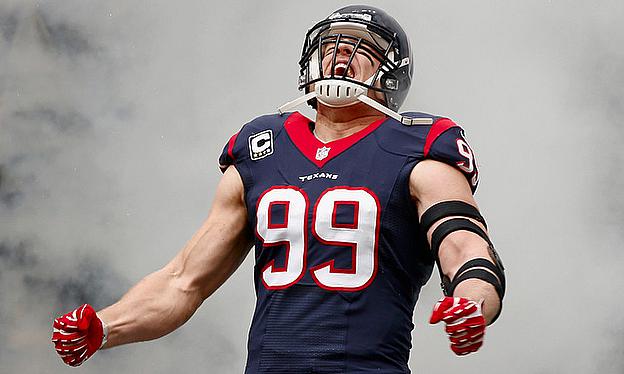 With a brief lull in the Six Nations, we’ve given ourselves a license to have a bit of fun this week and we bring you our wish-list of sporting stars that we would love to see grace a rugby union pitch.

Some of these athletes could one day end up turning out in the sport, whilst others are just pipedreams, but nevertheless, it’s fun to imagine the impact they could have had had they taken up the oval ball at a young age.
We get things going with a fairly realistic prospect...

Sam Tomkins, Rugby League
There was a time, not too long ago, when Tomkins was considered a far more likely convert to union than Sam Burgess. Unfortunately for fans of the 15-a-side format, those rumours came to naught. That said, Tomkins has been highly complementary of union in the past, as well as representing the Barbarians against Australia in 2011, and a transition in the next few years is not off the cards in the slightest.
Tomkins lights up league matches with his dazzling footwork and ability to turn the smallest of gaps into big gains. If he should ever make the transition, the comparisons to Jason Robinson will be relentless, but there are a lot of similarities between the two players and it’s not too wild of an idea to foresee him providing an injection of impetuous to English rugby in the run up to the 2019 Rugby World Cup.

J. J. Watt, American Football
Ok, now we are in the realms of wild fantasy. Fresh off signing a $100 million contract with the Houston Texans and establishing himself as the NFL’s premiere defensive lineman, Watt is not coming to rugby. He is, however, a big rugby fan, often attending the USA Eagles’ home matches, as well as always tuning in for the Six Nations.
The stamina of Watt is beyond question and he would be one of the few NFL players that wouldn’t have to work on that in order to make an impact in union. At 6’ 5” and weighing in at 131kg, Watt would dwarf many rugby players and would almost certainly have to forge out a role for himself in the second row or at number eight. The acceleration, strength and colossal hits of Watt would make him an instant box office attraction in rugby.

LeBron James, Basketball
More fantasy here, I’m afraid. In terms of pure athleticism, there is no sport that holds a candle to basketball. The playground of uber-athletic giants, many of whom would be gold medal candidates in a plethora of track and field events, the NBA is an awe-inspiring competition to watch and no player dominates in that arena as comprehensively as James.
Though basketball is not a contact sport, James is no lightweight, weighing in at 113kg. He also stands at 6’ 8” and would tower over most rugby players, but it’s not his height that would be his greatest asset. With so much made over collisions with players in the air these days in rugby, James’ ability to jump higher than anyone in rugby would become quite the weapon, not only for securing ball, but also drawing penalties. It’ll never realistically happen, but James has voiced his discontent over NBA lockouts in the past and created rumours of a change in sports...

Joel Selwood, Australian Rules Football
We return, just slightly, to the realms of possibility here, as Selwood would certainly not be the first AFL player to convert to union, although with the respective popularity of the games in Australia, it is still very unlikely. Captain of the Geelong Football Club in the AFL, Selwood has become one of the most impactful players in the tournament and has successfully transitioned from one of the most promising players in the tournament to become a face of the sport and is still just 26 years of age.
Israel Folau is the most prominent convert from Aussie rules, but Harlequins fly-half Nick Evans was also an avid Aussie rules player in his youth. The success both players have had in union, thanks in part to the skills they picked up in Aussie rules, makes it hard to pick a certain position for Selwood in union, with his impressive skill set potentially making him a stellar fly-half, centre or full-back.

Conor McGregor, MMA
The Irish star of the UFC doesn’t have any rugby experience to my knowledge, but he has the required physical skills and toughness in abundance. He is small in rugby terms, but that never stopped Shane Williams, Christian Wade or a plethora of fine scrum-halves. Being able to evade bigger players, whether that’s through speed or agility, is vital for any player the size of McGregor to thrive in rugby, as is toughness, which it is safe to assume the star of the octagon has.
It’s no secret in rugby that most scrum-halves love to bite back at bigger players when things get heated, with forwards usually employing a broad smile as they come face-to-face with their more diminutive adversaries. It would be interesting to see how quickly those smiles faded if it was McGregor they were confronting out on the pitch.

Lawrence Okoye, Discus/American Football
Okoye actually has a history of playing rugby and if reports are to be believed, had offers from rugby clubs following the 2012 London Olympics, but instead choose to pursue a career in the NFL. The transition from physical specimen to effective NFL player was always going to be difficult for Okoye, but he has handled it well and shown clear progress over the last two years. There is no guarantee that this progress will result in him making it in the NFL however, and a career in rugby shouldn’t be discounted at this point.
At 6’ 6” and weighing 138kg, Okoye was actually a winger during his days at Whitgift School and, rather scarily, would make Jonah Lomu look small. Whether he would still now be able to play on the wing is debatable, but the kind of physical skills he could bring to the pack would be beyond considerable and should he ever decide to give rugby another go, expect teams to be lining up around the block to give him a shot.