Skeat Sevens set looking to kick on after summer success 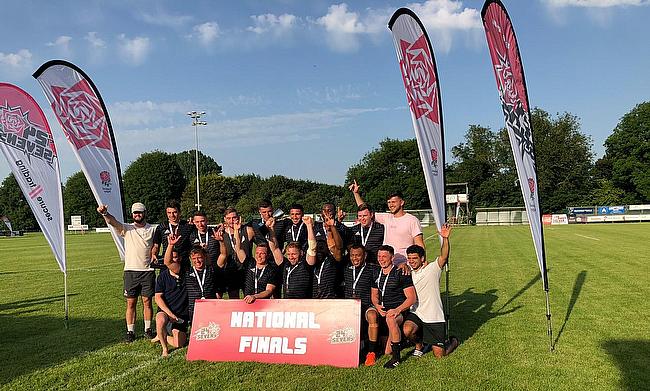 Just over a week ago, Talking Rugby Union brought you the story of the England Universities sides that fought valiantly in the Nottinghamshire sunshine at the RFU National Finals.

This week we have spoken to the victors, Skeat Sevens, about their journey to becoming the champions of the National Finals.

“Loughborough University do the Loughborough 7s, which is a local qualifier for the National Finals and every year we have put together a sevens team from there,” attack coach and player Victor Keunen started.

“This time we got a lot of interest from our mates who wanted to coincide it with coming back (to Loughborough).

“We knew that we had a good team going into that tournament, but quite unprofessionally, we were all on a night out the night before that tournament. We played on the Saturday and still managed to win it. It was quite a tough final, but we saw the potential and had great fun doing it.”

Team photos of our Social and Open #SecureTrading7s Events winners and runners up from Saturday:

Named after a friends clothing brand, Skeat’s players are largely made up of Loughborough students that are just about to finish their studies. With a range of experience in both National One and BUCS Super Rugby, the side won both the Loughborough 7s, as well as the Chester 7s following the realisation that winning one more qualifier would send them to the National Finals in Nottingham.

“We decided on Chester 7s and everyone went up there and it was a horrible, horrible day,” Keunen said. “ Not sevens weather at all but we ended up winning that one as well.

“We always knew when coming to the events that we had the team because of the standard of players that we know from Loughborough and the boys we knew we could get in.

“It was always good to have the contacts to bring people in when we needed. For example, for the finals, I think we brought in six new faces so six boys that had never played together before. It took us a couple of games to get with it because we’d never played together as a group. It wasn’t just a group of mates like the last two tournaments.

“They all just came together and put on a really good display of rugby and by the end of the day, having won it, it was a great experience. That’s what it was all about for us, the reason for making the team in the first place.”

National Champions - what a spectacular set of boys. 15 Wins , 0 Losses. Thanks to all the support ? onwards and upwards .

The conversation quickly moved to the weather. It was a hot day in Nottingham, with readings of 31 degrees in the shade, never mind what the temperature was in the sun. Keunen admitted that, for once, he felt fortunate for being injured and stood on the touchline in his role as the attack coach.

“Dealing with the heat was something. I wasn’t even playing and I couldn’t even imagine that, it was pretty ridiculous. Even during the semis, there were boys just lying on the floor for the last play with tries going in. In the final, I think it almost came to a standstill. People were just walking about, which I don’t blame them for at all.”

Having completed his studies at Loughborough this spring, Keunen will be joining Rosslyn Park for another campaign in National One, having captained Loughborough on many occasions in the season that has just passed.

Fully intending to keep running Skeat Sevens running, Keunen believes that Skeat and Loughborough will always be intertwined: “We had to wear Loughborough kit for Chester 7s because we couldn’t get our kit in time. I think that we’ll always be associated with them in that way.”

Congratulations to all the grassroots sevens teams who took part in today’s finals ??

There was nothing but praise for the university from Keunen. Just several weeks ago, TRU heard from Rhys Edwards, the university’s head of performance in rugby union, who said that he wanted to turn their rugby programme into the best in the world. Keunen sees no reason as to why it couldn’t be.

“I think it’s great. Loughborough has always been and always will be a top performance centre of excellence and it does draw people there. You’re always in a professional environment, you’re not getting paid, but you’re in an environment where you’re always ambitious and can succeed because of the people around you and the pressure that is put on you a little bit.”

Keunen believes that the promise that Skeat have shown in the sides short life can only be positive in the future. Completely self-funded this season, the Londoner hopes that they can get some sponsors on board in the near future and maybe move up to the Super Series, or even do a summer tour.