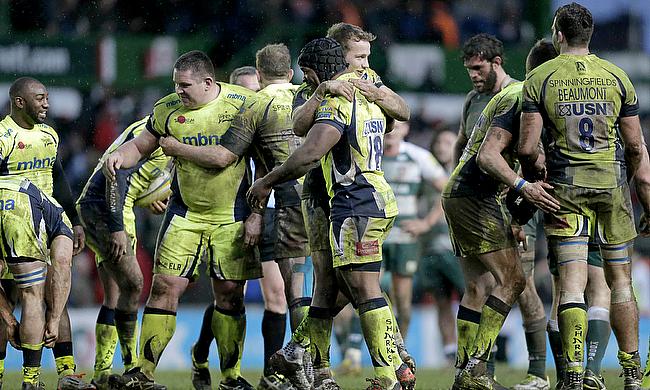 Rugby can be a funny old game.

For years, Sale Sharks have been treading water, of sorts, losing their star players to ‘bigger’ clubs, struggling with attendances and finances, but still managing to stay competitive in the Aviva Premiership and, more often than not, qualify for the European Rugby Champions Cup.

In come new owners who have the financial muscle retain those key players and grow the club so that it can attempt to recapture the glory days of the 2005-06 season and the club’s performances on the field have become uncharacteristically inconsistent.

Admittedly, Sale currently sit 5th in the Premiership, with three wins and a draw from their opening seven games, but four of those games have come against the bottom four teams in the league. In Europe, they have succumbed to two losses from two games, despite proving particularly plucky against Toulon.

For every two steps forward this season, there has been a frustrating step back.

An important home win over Harlequins was followed up by a home loss to Gloucester, with the AJ Bell no longer looking like the impregnable fortress it was well on its way to becoming last season.

Similarly, a morale-boosting victory over Leicester Tigers was backed up by limp losses on the road to both Bath and the Scarlets.

The beginning of the season has shown that Sale can beat anyone on their day, but replicating that form week-to-week, as the likes of Saracens, Bath and Wasps do, seems to be beyond them right now.

The losses of Tommy Taylor and Danny Cipriani in the offseason have been at the centre of those problems.

Taylor’s impact on Sale’s set-piece – which was one of the most reliable in the Premiership last season – went underappreciated until now and the positive influence he has had on Wasps in the same area has been significant in their rise.

Likewise, the loss of Cipriani has created issues for Sale at fly-half.

In addition to hooker and fly-half, there are also looming issues at tighthead and scrum-half, given the age of current incumbents, but elsewhere the outlook is very healthy for the Sharks.

Young talents like George Nott, Curtis Langdon, Tom and Ben Curry and Ciaran Parker are pushing to join established forwards like Josh Beaumont, Cameron Neild and Ross Harrison in the pack. With those more senior players yet to even approach their peaks, the longevity of the Sale pack looks good.

In the back line, Paolo Odogwu has added his name to a group of players including Mike Haley, Will Addison and Sam James, all of whom are 24 years of age or younger. They have recently been joined by Rugby League star Joshua Charnley, who offers plenty of potential in the 15-man code.

If Sale can retain these players under the new ownership, which has always been the Achilles’ heel of the club, then there is no reason why they cannot begin to challenge for a playoff spot in the coming years.

Of those listed trouble positions, Langdon, Parker and James Mitchell are coming through at hooker, tighthead and scrum-half respectively, but all will need investment over the coming year, as well as at fly-half, if the club harbours serious ambitions at the top of the table.

Sale entering the season with just one established fly-half in MacGinty has been the cause of most of their problems this campaign. Dan Mugford was brought in from Nottingham, whilst Sam Bedlow and Sam James can cover there, but it is a dangerous scenario to bank all your hopes on one player, especially in a season as long and demanding as the Premiership one.

Sale are two or three jigsaw pieces away from being the force they once were and if they can get them in place, hopefully the attendances will begin to rise once more and rugby union can again have a strong presence in the north-west.

In the meantime, their next three league games – Saracens, Wasps and Exeter – will provide a more accurate barometer of where they sit in the current Premiership pantheon.