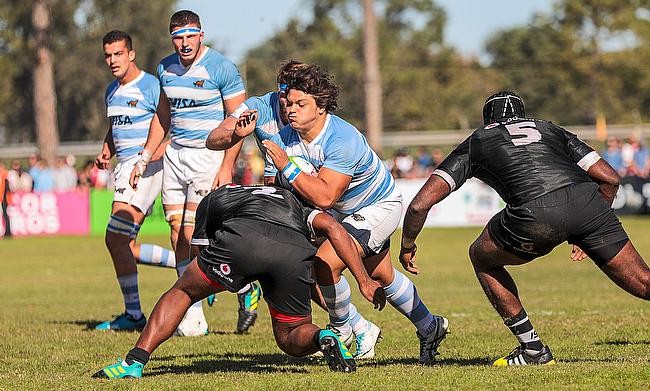 Argentina charge at the Fiji defence in their Pool A match at Club de Rugby Ateneo Inmaculada
©Franco Perego/World Rugby.

Argentina ran a seven try riot as they went on to defeat Fiji 41-14 in their World Rugby U20 Championship encounter at Club De Rugby Ateneo Inmaculada on Saturday.

This is Argentina's first win of the tournament as they are at second place in Pool A while Fiji are languishing at the bottom after losing both their games.

Fly-half Joaquin de la Vega Mendia made an attacking start for Argentina as he dived over the line in the 9th minute and Fiji had a chance to reduce the gap but Caleb Muntz kick went wide.

Argentina soon doubled their lead by the 15th minute when Ignacio Mendy dived across the corner which remained the final points in the first half as the home side had a 10-0 lead.

Argentina made a bright start to the second half with Juan Bautista Pedemonte touching down early in the second half before Fiji finally managed to break the shackles with a touchdown from Etonia Waqa in the 44th minute.

Fiji had their chance when Argentina were reduced to 14-men temporarily by the 50th minute following a sin-bin to Juan Bautista Pedemonte but the visitors could not make use of the advantage.

Instead, Los Pumitas Rodrigo Isgro (59'), Ramiro Gurovich (65') and Thomas Gallo (68') scored tries as they stamped their authority in the game. Alifereti Loaloa scored a consolation try for Fiji in the 71st minute but a penalty try awarded to Fiji following a sin-bin to Anasa Qaranivalu ensured the hosts had a 41-14 win to boost their confidence.

Argentina captain Juan Pablo Castro: “It was a very important win for us to continue on the way we planned before the tournament. We have to work a lot before that game so we can play against France in a good way.”

Fiji captain Tevita Ikanivere: “It really did affect us later in the game because if we had scored we could have got the momentum. I think we need to work on our decision making and our execution.”