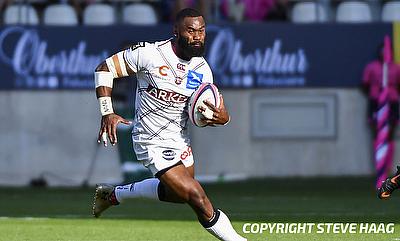 Bristol Bears director of rugby Pat Lam has confirmed that their star Fiji international Semi Radradra is ruled out of their upcoming Heineken Champions Cup game against Connacht.

Radradra played all 80 minutes during the Autumn Nations Cup game against Georgia despite suffering a leg injury early in the match which aggravated his issue and was forced to sit out of Bristol's Champions Cup opener against Clermont Auvergne which Lam's side went on to lose 38-51.

Following the issue, Bristol had already lodged a complaint on Fiji's injury management procedure to World Rugby and according to Lam had the 28-year-old was taken off the field early in the game when he felt discomfort, the injury might have not worsened.

Lam confirmed that he will be on the sidelines for the Sunday's game and is also a doubtful starter for their Boxing Day Gallagher Premiership game against Harlequins on 26th December at Twickenham Stoop.

“It was good to get in contact with Vern,” Lam said.

“It was never against Fiji Rugby, it was against the process of what happened.

“As I said, if Semi had got a cruciate ligament injury in that game and he was out for the rest of our season, that happens. This was all around things that could have been handled better.

“It would be exactly the same if it had happened in the Wales camp or the England camp with other players. It would be no different.

“Semi won’t be available for this week. We are hoping for the week after, but it’s still touch and go.”

Radradra, who switched codes to rugby union in 2017, joined Bristol in 2020 after stints with French sides Toulon and Bordeaux Bègles.