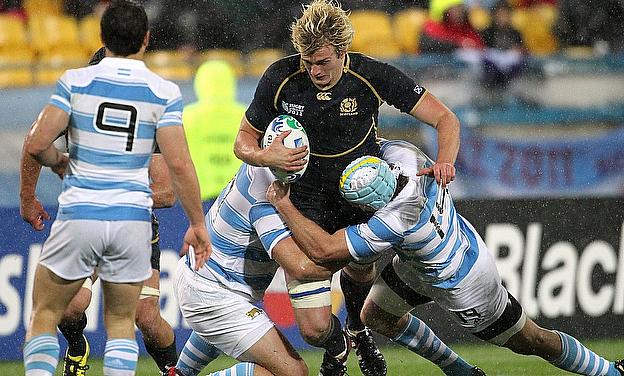 Scotland's Richie Gray is tackled by Argentina's Genaro Fessia (right) and Martin Scelzo during the 2011 World Cup. The sides will meet twice next year.
©Press Association

Scotland Look Ahead to 2015 World Cup with Five Uncapped Players
Scott Johnson Will Bring Scotland Excitement, One Way or Another
Where is Best for Young Rugby Pilgrims?

Scotland will play 12 internationals next year, the Scottish Rugby Union has confirmed.

In addition to five RBS 6 Nations fixtures, they will also face a busy June with a four-Test summer tour.

New Zealander Vern Cotter is set to replace Scott Johnson as head coach in June, so he should be in place for the first international against the United States in Houston on Saturday, June 7.

Venues for the Pumas and Springboks Tests have yet to be confirmed.

Meanwhile, the SRU have also confirmed next year's autumn Tests, which will be opened by a return match against Argentina on November 8 or 9.

World champions New Zealand then head to Murrayfield on November 15 or 16 while Tonga will close out the three-match series on November 22 or 23.

With ticket sales already well advanced ahead of the Six Nations, the SRU expects further large turn-outs for the autumn Tests.

Dominic McKay, Scottish Rugby's director of commercial operations, communications and public affairs, said: "The past year has seen a cumulative attendance of more than 500,000 for our top-of-the-bill Scottish rugby matches and the innovations we've introduced to reward supporters' loyalty - including our season pass - have proved very popular.

"We will have five home Scotland matches in the 2014 calendar year and we will be working hard - both on and off the field - to deliver a memorable day out for all Scotland supporters."

Gavin Scott, the Scotland team manager, added: "We're awaiting confirmation from our counterparts in Argentina and South Africa as to where our (summer) Test matches will be staged.

"I know from my own planning trip to North America that there's a lot of excitement in both the US and Canada about our Tests there and I'm sure Scotland supporters will be out in force at all of our summer Tests."