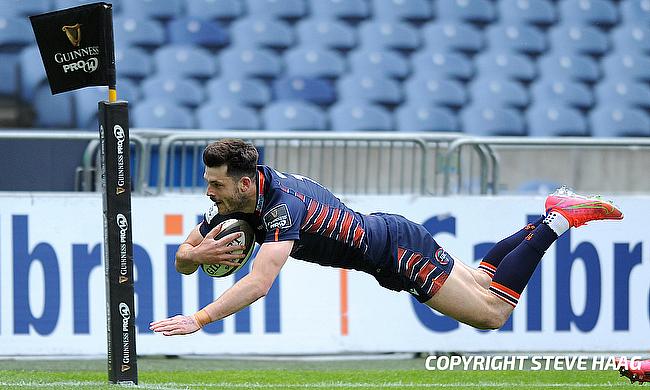 Edinburgh have announced that Scotland international Blair Kinghorn has signed a new deal with the club.

A product of Edinburgh Academy, Kinghorn made his senior debut for the club in 2015 and had an impressive outing in the 2017/18 season where he was named in the Dream Team of the season.

The 24-year-old became the youngest player to make 100 appearances during the game against Glasgow Warriors in May and overall has featured in 106 games for the club.

“I’m over the moon to be extending my time at Edinburgh. A lot of hard work has gone into this club and I think this season it’s really starting to show," he told the club's official website.

“This team can achieve a lot this year. We’ve shown our potential in the URC and even more so in our Challenge Cup win against Saracens. If we play to our potential, we’re definitely capable of getting some trophies which is what everyone wants.

“Having grown up in Edinburgh, while supporting the club from a young age, getting 100 caps for Edinburgh Rugby was a brilliant feeling, so now to be able to continue that journey is amazing.

“I’ve loved every bit of this season so far. Playing at the DAM Health has been amazing and running out to a packed-out crowd at home is something else. I really feel like it can become a fortress for us moving forward.”

Kinghorn's success with Edinburgh saw him earn a Scotland debut in 2018 and has featured in 28 Tests for the Dark Blues including two appearances in the 2019 World Cup.

Edinburgh head coach Mike Blair is delighted with Kinghorn extending his stay at the club.

“I’m delighted we’ve been able to retain a player of Blair’s calibre at the club. He’s a local guy and a club centurion to boot, so it’s brilliant he will be staying with us for the foreseeable future.

“Blair is an extremely versatile player, who brings added quality with his unique skillset, while I have been really impressed with his form in a relatively new position at 10 at senior level.

"Blair has all the tools to be an exciting stand-off and I’m looking forward to seeing him continue to develop in that position."

Edinburgh are positioned second in the United Rugby Championship table with five wins from seven matches.