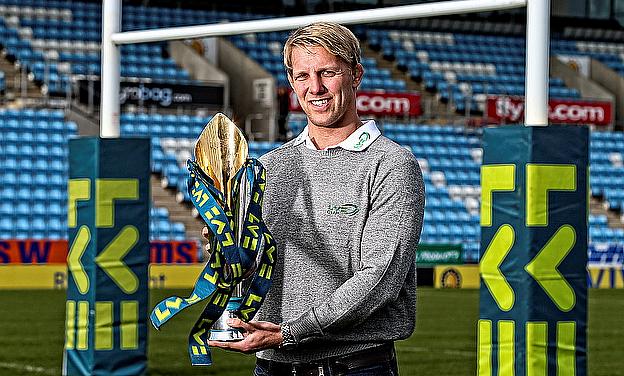 At the moment the LV= Cup semi-finals look like being a battle between the cream of English and Welsh rugby, and World Cup winner Lewis Moody for one is not surprised.

Top of the four pools in the Anglo-Welsh competition are Saracens, Northampton Saints, Bath Rugby and Leicester Tigers, a lot of people's tips for the league semi-finals.

Defending champions Harlequins are in a spot of bother in the early stages but Moody admits that ahead of the third round of games, the strength in depth of the top sides makes them heavy favourites once again, although his former club Bath have really caught the eye ahead of the visit of Cardiff Blues this weekend.

"Over the years it has become clear that any side hoping to be successful need strength in depth," he said.

"You only get that strength in depth by giving your younger players and squad players game time.

"When can you do that? The LV= Cup is becoming more and more prominent as a great platform for developing young talent.

"If they get the chance and prove themselves, only then can you find out if these are players that you can rely on.

"Look at how someone like Leicester, and Quins last year, gave their young guys a chance and then these guys are in their squad for the big finals.

"Bath have to be right up there in terms of the favourites for the LV= title as well.

"Considering the season they are having, they are going to be very disappointed if they don't come away with any silverware.”

Saints have been rightly lauded for their squad depth this season, something that in years gone by they might have struggled with. And with a trip to the Newport Gwent Dragons up next in the LV= Cup and their Heineken Cup adventure at an end, Jim Mallinder's troops must make the most of their strong start according to Moody.

"For Saints it has been an up and down season, more ups than downs obviously but the LV is a chance to refocus," he added.

"They are itching to win trophies, especially having lost in the LV= final two years ago, the Aviva Premiership final last year, the Heineken final not long ago."

If the top four are to be derailed then one of the likely outsides are Sale Sharks, last year's runners up in this competition.

Sale welcome Worcester to the AJ Bell Stadium this weekend for their fourth clash of the season already, with a fifth coming in the league in February.

Steve Diamond's side have won the first three clashes but Moody sees a lot of similarities between the Warriors of this season and the Sharks of last.

"Worcester are in a situation like Sale last season, they are having a total nightmare," he said. And it might just be that one win that can turn their season around.

"They have to ignore the losses that have come, they will not be thinking about the league for once.

"I have been impressed with Sale though, and the big sides big sides all play against each other in the final round so there could be scope for someone else to get in there."

Moody is referring to the fact that Leicester Tigers play Bath Rugby and Saracens play Northampton Saints in the final round of the LV= Cup. That might also open the door to Exeter Chiefs, and they host the Ospreys this weekend hoping to keep their knockout stages alive, especially with Sandy Park playing host for the final.

"Certainly if I was them I would be doing everything I can to get to the final," Moody said.

"Sandy Park is a fantastic little venue, with the World Cup coming as well there are massive developments underway.

"They are a very ambitious team, and since they have been promoted they have established themselves but still not won anything.

"That is the big goal for them, and they seem to have a lot of young talent coming through there so this is a big chance for them.

"The Ospreys are coming off the back of a tough European campaign and will be looking to get their season back on track."

Be part of the rugby family at the LV= Cup Final at Sandy Park, Exeter on March 16th. Tickets now available:www.ticketmaster.co.uk