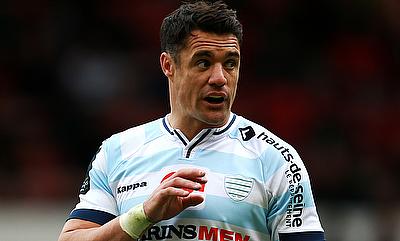 Saracens head coach Mark McCall stated that his team won't be making the mistake of targeting the Racing 92 fly-half Dan Carter when the two teams meet each other in the final of the European Champions Cup on Saturday.

All Blacks World Cup winner Carter has been an integral part of Racing 92 in this season and he contributed with 11 points in the 19-16 semi-final victory over Leicester Tigers on 24th April.

The 34-year-old is also ranked fourth in the top point scorers in the current season of the Champions Cup behind Owen Farrell, Dan Biggar and Jimmy Gopperth.

Even though, Carter is expected to grab the attention in the final against Saracens, McCall believes focussing too much on the All Blacks legend will hamper their chance in the game.

"It's a big, big, big mistake to think you're going to go and get Dan Carter," said McCall.

"Dan Carter's been doing this for a very long time. So we've got to make sure that his influence in the game isn't huge, isn't unbelievably significant.

"And if we can do that it means our pack have got on top in the scrum, in the lineout. It means we'll have put a little bit more pressure on him than he's experienced before.

"But if you run down his channel and think you're going to shake him up, you're not going to."

Apart from Carter, McCall is also wary of the French scrum-half Maxime Machenaud and the possible damage that can be caused by the pair as seen in the semi-final against Leicester.

Machenaud was the only try-scorer for Racing 92 in the semi-final and he along with Carter contributed 16 out of the 19 points scored by the French club.

“Machenaud's unbelievably competitive, he gets his attack going," said McCall.

"He brings their big men into the game and someone we're going to have to watch like a hawk.

"He and Carter work very well together, and Dan Carter's an expert at picking his moment at when to involve himself, and usually it's a pretty good involvement.

"We've just got to make sure we're really alive to every time that he's going to get the ball, kick and try to put us under some pressure."

During the Heineken Cup final in 2014, Saracens reached the Millennium Stadium on the morning of the match day and later suffered delays on their way home following the defeat to Toulon.

This had an impact on the Aviva Premiership final which was played a week later and they succumbed to a narrow defeat to Northampton Saints.

Having learnt from the mistake, McCall is confident about having a systematic approach this time around.

"We made a big mistake two years ago: we tried to squeeze our day," said McCall. "We flew down to Cardiff on the day of the match and struggled to get a train home after the match.

"So this time we're going to go and enjoy ourselves and take our time, and embrace the weekend properly."