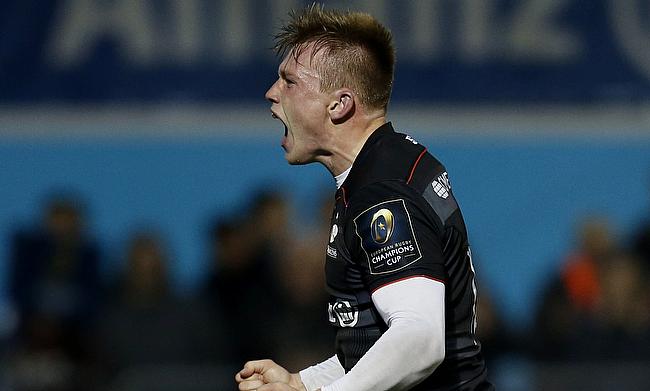 Nick Tompkins scored one of the try for Saracens
©PA

The win has taken Saracens to 77 points in the table as they narrow down the gap with table toppers Exeter Chiefs to four points.

Saracens made 11 changes to their line-up while Exeter made 12 but both the teams struggled to find a breakthrough early on. Saracens had a setback in the 19th minute when Will Skelton was sin-binned but Exeter failed to capitalise on the advantage.

The only points in the first half came when a combination of Vincent Koch and Richard Wigglesworth set Lewington for a try in the 33rd minute and Max Malins followed it with conversion as the Sarries went into the break with a 7-0 lead.

The Sarries showed better intent at the start of the second half with Lewington (43') and Nick Tompkins (45') and Marcelo Bosch added conversions on both the occasion to make it 21-0. Richard Capstick on his debut provided some consolation with a try in the 56th minute but further tries from Dominic Morris (67' and 75') ensured Mark McCall's men completed a 31 point win.

“We took some important things out of this. It has given us a view on some players and we’ve rested and hopefully cleared up a few niggles. But I’d have liked us to have performed better," said Exeter Chiefs director of rugby Rob Baxter.

“There’s always the psychological damage of a result like this, but there’s also the reality of knowing that we have to be good and that tends to bring out the best out in us.

“We don’t have to be the best Exeter Chiefs at the moment. We finished top last season and it didn’t win us anything. Two years ago we finished second and we won the Premiership.”