Can anyone stop Saracens from winning the Aviva Premiership title this season? 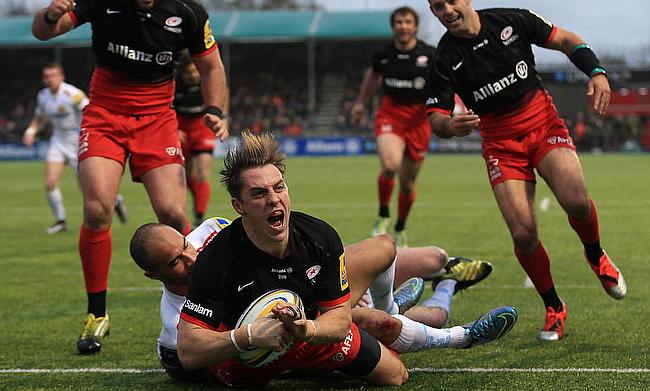 Chris Wyles touches down on his 200th Saracens' appearance*
©PA

Saracens have been sensational so far this season and the defending champions are looking incredibly strong as the business end of the campaign approaches.

Despite losing a number of their top talents during the Six Nations, Saracens have maintained their form and look well on the way to finishing the regular season at the top of the Aviva Premiership table.

Mark McCall’s side have lost just four matches all year – an impressive feat to say the least, especially when you consider that two of those defeats occurred during the Six Nations tournament. And now with the England contingent of Maro Itoje, Billy Vunipola, Mako Vunipola and Owen Farrell back in the side, Saracens will press on as they look to defend their crown.

In the build-up to the postseason, you can keep up-to-date with all of the latest rugby union news and odds via Bookies.com. Saracens are one of the Premiership’s most attacking sides, with only Wasps accumulating more points than ‘Sarries’ this year. McCall’s men are perhaps the most complete side in the competition however, and that’s a key reason for their success in recent years.

Ultimately, Saracens play to their strengths and attempt to exploit the opposition’s weaknesses on a weekly basis. They have the ability to adjust and adapt to certain scenarios, especially against the Premiership’s major sides and the likes of Farrell and Goode are both capable of controlling field position in the kicking game.

Wasps may be Saracens’ main competition for Premiership glory this year and their 64-23 drubbing in February sent shockwaves across the top flight. Wasps have been building slowly in recent times but they now have both the players and backroom staff to compete at the highest level of English rugby. However, Saracens might have too much talent with their star men back from international duty.

Only time will tell but Saracens will be there or thereabouts in the postseason. In years gone by, they have featured heavily in the playoffs and once again, McCall’s men are set to compete for Premiership glory. On current form, they are looking almost unbeatable but who knows, the likes of Wasps or even Exeter Chiefs could take down Saracens if they perform at their very best.

One thing’s for sure: the Six Nations may well be over but the excitement and anticipation for the Aviva Premiership playoffs is starting to grow...