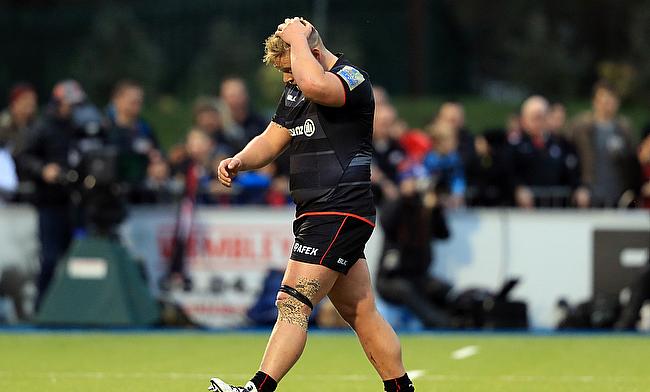 Saracens' Richard Barrington was sent off at Allianz Park
©PA

Defending champions Saracens showed great fight after restricted to 14-men for most part of the game to draw the Aviva Premiership encounter against Exeter Chiefs 13-13 at Allianz Park on Saturday.

Saracens suffered setback right at the start when prop Richard Barrington was sent-off in the 10th minute after a high tackle on Exeter Chief's lock Geoff Parling. Even though it was centre Brad Barritt, who initiated the tackle, he was lucky to escape without any sanction.

Exeter seized on the advantage and Gareth Steenson opened their account with a penalty while Jack Nowell crossed over in the 14th minute as the visitors stretched their lead to 10 points after the fly-half added the conversion.

A late penalty from Saracens fly-half Alex Lozowski saw the home team head into half-time with a trail of seven points.

The double champions were in no mood to give up in the second half and upped the ante with Lozowski scoring his second penalty in the 52nd minute which was negated by Steenson's response in the 69th minute.

As the game headed into the final 10 minutes, it was Exeter, who were leading by seven points but their advantage was cut down by Saracens replacement Titi Lamositele as he strolled past the post in the 73rd minute and Lozowski held his nerve to add the conversion which helped the Sarries level the scores 13-13.

Despite, the draw Saracens claimed the top position with 48 points from 13 matches and closely followed by Wasps with 47 points from 12 games. Meanwhile, Exeter Chiefs have consolidated their position at third.

Saracens rugby director Mark McCall was relieved to see the team fightback despite the early setback.

"The players were incredible with how they coped and dealt with all the situations that arose, and by the end it was a game that we maybe could have won as well.

"I felt Geoff was going to the ground and Richard (Barrington) came in as the adjusting defender, and he made contact. Obviously we hope Geoff's okay.

"Today ended up being a titanic struggle between 15 and 14, but I don't think anyone wants to see those kinds of games.

"I think we need to be sensible, I'm not saying they weren't today, but we've got to be sensible with how we apply this care for players, and that's all."