Saracens extend lead atop the Premiership with Exeter win 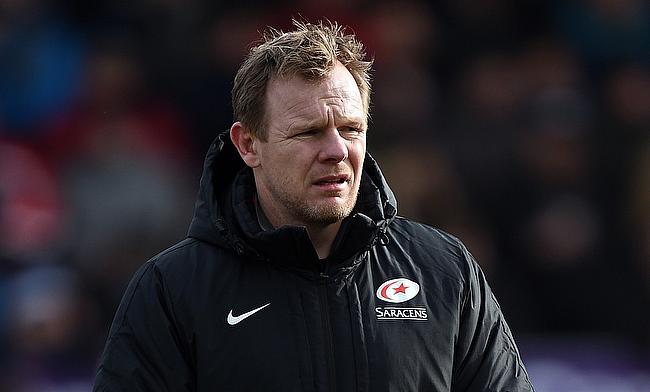 Saracens extended their lead to five points at the top of the Aviva Premiership on Sunday with a hard-fought 14-11 win over second-placed Exeter at Sandy Park.

The visitors came back from 11-0 down to become the first team to win at the Chiefs' home in 13 months, but in the end they were deserved winners.

A superb solo try from James Short and two penalties from Gareth Steenson helped Exeter build an 11-0 lead but three penalties from Charlie Hodgson and a try from Samu Vunisa earned Saracens a crucial win.

Chiefs went ahead after only three minutes when Steenson kicked a simple penalty but Saracens, playing against a stiff breeze, dominated the next 10 minutes with excellent ball retention to keep the home side penned in their own half.

Saracens looked likely to score the first try of the game until they were stunned by their former player, Short, as he intercepted a poor pass from Charlie Hodgson to run 95 metres to score and give the Chiefs an 8-0 lead at the end of the first quarter.

Minutes later Exeter may have had a second try when Atkins touched down but the referee ruled out the score for an earlier knock-on, though replays appeared to show a Saracens player had knocked it back towards his own line.

Despite being behind, Saracens continued to have the advantage in terms of territory and possession with some astute kicking from scrum-half Richard Wigglesworth causing the hosts a few problems.

However, when Exeter were in possession, they looked far sharper and more capable of breaching the opposition defence but it took a second penalty from Steenson to extend their lead when Saracens were penalised at a scrum in their own 22.

The final 10 minutes of the first half saw Exeter concede a number of penalties to give the visitors a platform and pressure in the home 22 but careless play from Saracens stopped them benefiting until number eight Vunisa crashed over to finish off a driving line-out. Hodgson's conversion was blown away by the wind, so his side trailed 11-5 at the interval.

Early in the second half Saracens made two significant changes with Itoje and Jacques Burger coming onto the field in place of Smith and Vunisa. This allowed them to maintain their dominance but their malfunctioning line-out was allowing the home side to relieve the pressure.

Eventually Saracens got their reward when Hodgson kicked a penalty after 53 minutes as the visitors' powerful scrum were becoming ever more influential.

However, Hodgson's frustrating afternoon continued when another hurried pass saw Will Chudley intercept and race away only for Wigglesworth to saved face by tracking back to tackle his opposite number.

With 13 minutes remaining Hodgson tied up the scores with his second penalty before Exeter rallied to have their best period of the second half. Steenson declined to attempt two difficult penalties in favour of attacking line-outs but Saracens' defence held firm, before Hodgson fired over the winning penalty with five minutes left on the clock.