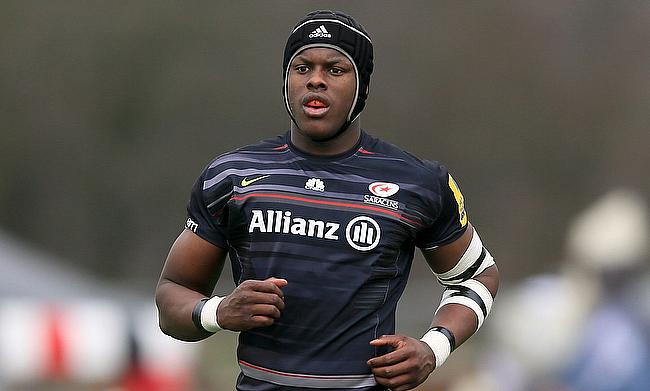 A Maro Itoje inspired Saracens comeback ensured the reigning Aviva Premiership champions preserved their unbeaten record at Allianz Park this season with a 19-13 win over Bath.

Saracens were held off the scorebaord at half-time for the first time in three years due to a combination of sloppy handling and a monumental defensive effort from Bath.

Rhys Priestland booted two penalties and converted an early Tom Homer try - but the hosts proceeded to chip away at their 13-point lead following the interval.

Charlie Hodgson struck twice from the tee before coming up inches short of crossing the whitewash, but ferocious Bath defence was eventually undone by Itoje.

The 21-year-old lock, released back to Saracens by England coach Eddie Jones this week, powered deep into Bath territory before Schalk Brits crossed and Hodgson converted to level the scores.

Former England fly-half Hodgson then struck a further two penalties to deliver Bath's death knell; the first coming from yet more intelligent play from Itoje at the breakdown which helped condemn Bath to a sixth league defeat in nine games.

Bath were lively from the off as Matt Banahan, starting at outside centre, burst through the Saracens midfield only to throw a wayward pass to Semesa Rokoduguni, who was ushered into touch by Richard Wigglesworth.

It looked as though Bath had gone over from the resulting lineout drive, but they had to settle for a penalty which Priestland knocked over.

Saracens came close to responding in the eighth minute after Duncan Taylor went over in the corner, but the Scottish centre was called back by referee Dean Richards for a forward pass in the try's build-up.

And it was Bath who were to cross the whitewash first as, five minutes later, Homer picked an excellent line off debutant Dan Bowden after Bath's forwards have motored themselves forward from a lineout.

Priestland added the extras and Bath, somehow, made sure Saracens remained pointless at half-time.

Before the half was out Priestland extended the lead to 13-0 - albeit only after the Wales fly-half missed a touchline effort in blustery conditions - as Bath found more attacking impetus in the rolling maul.

Saracens started the second-half with far greater purpose however and despite Hodgson missing his first attempt, he made up for it by nailing two inside the first 10 minutes.

Priestland then missed a very kickable penalty from 35 metres out soon after, and balance was restored at scrumtime with the introduction of USA prop Titi Lamositele.

Pressure was building - Homer made a crucial interception to just about keep Saracens from scoring before Leroy Houston held up Hodgson just short of the line.

But Itoje eventually broke Bath open after bursting down the right flank and when Saracens recycled the ball, Brits surged through an opening before stretching out to just enough about reach the tryline and dot down.

Hodgson added the extras, before nudging Saracens ahead with seven minutes to go after Itoje once again made a menace of himself in the ruck. A further Hodgson penalty sealed the victory.