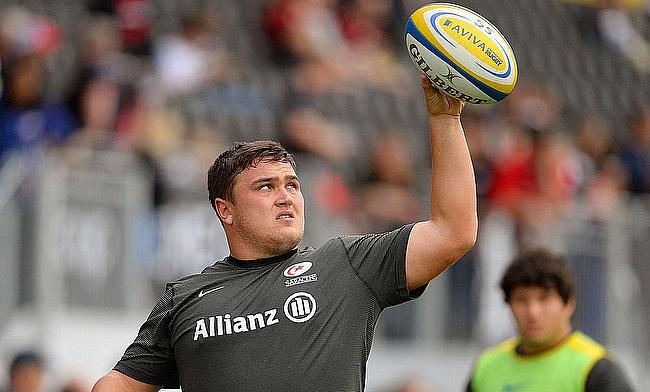 Doncaster out to topple Ealing on crucial Championship weekend
Saracens romp into the top two after dispatching Ampthill
Promotion-chasing Ealing kick off GK IPA Championship run-in
Max Argyle Exclusive: 'It was quite nice to give something back to the club'

The penultimate round of the regular season has concluded, but we now know the two sides who will be competing for promotion to the Gallagher Premiership.

Both Ealing and Saracens booked their place in next month’s GK IPA Championship play-off whilst the team finishing bottom of the division was also confirmed, but of course there is no relegation.

As ever, the weekend just gone had it all; last play winners, huge blowouts, hat-tricks and no shortage of entertainment. Here’s a summary ahead of the home straight:

Jersey made the most of their final road trip of the season, hitting Hartpury for a half-century in what was flanker Max Argyle’s 100th appearance for the Reds.

Pury have suffered a tumultuous season, laying claim to the league’s leakiest defence but only outscored by Ealing, Saracens and Cornish Pirates.

Tom Williams was the star of the show for the visitors helping himself to a trio of first-half tries as Jersey ran in five in the opening 35 minutes to put this game to bed.

After scoring the first two tries of the match, Williams’ sequence was interrupted as Hartpury mounted a brief response through his namesake, James.

However, that was quickly negated by Max Green’s effort for the Islanders before Williams wrapped up his hat-trick and Jersey’s try bonus point.

They still had time for another before the interval, duly delivered by Brendan Cope who profited from an interception to move Jersey into a 31-7 half-time lead.

There was a try apiece early in the second period, with Scott van Breda extending Jersey’s advantage before Oscar Lennon came up with his first Hartpury try.

A period of ceasefire followed until Morgan Monks added a third for the hosts to keep them vaguely in touch with 15 to play and at least a bonus point on the cards.

But, back came the Islanders to finish with a flourish as replacements Jack MacFarlane and Bader Pretorius each notched late tries to help their side past 50 and to a fine away victory.

There had been a big red circle around this fixture for weeks with it almost acting as an unofficial play-off semi-final to see which side might end up in the top two.

It proved to be a see-saw contest for around 50 minutes, but Ealing put the hammer down from there, earning themselves a spot in the final and extinguishing Doncaster’s hopes in the process.

It was Donny who came flying out of the blocks, throwing everything at it to extend what has been a wonderful season.

They raced into a 10-0 lead within as many minutes, a catch and drive ended in Guido Volpi rumbling over. His effort was converted by Sam Olver who added a penalty soon after.

Ealing came roaring back thanks to a rampaging Guy Thompson effort from long range. They then had to withstand some Knights pressure before Kieran Murphy powered over to take the hosts into a 14-10 lead with a pair of Craig Willis conversions.

Doncaster had lost Kyle Evans to the sin-bin in the interim and despite further chances for both sides, that was how the score stayed at the break.

As they had in the first half, Donny made another fast start in the second, eventually working space for Will Holling to cross as the Knights nudged themselves in front.

A response required from Ealing and they truly delivered, scoring four unanswered tries to claim the day and a play-off space.

First, Dean Hammond was on hand to finish off a break and reclaim the lead and he was shortly followed by another rolling maul which ended in Michael van Vuuren crossing the line to secure the bonus point.

The Trailfinders then capped off their day with Luke Daniels dancing his way over as Ealing booked their place in the final.

Dominant Saracens performances are something we’ve become extremely accustomed to in recent weeks, but they may have found a new level in this one.

Coventry were always up against it but have been in solid form themselves so they might have hoped for better than this.

Fans packed out the ground and had to wait barely a minute as Elliot Daly crossed for the first of what would turn out to be a hat-trick.

Jamie George quickly followed him over from the back of a rolling maul, with Owen Farrell converting for an early 10-0 lead.

A fairly even period followed which saw chances for both sides, but once Toby Trinder was yellow-carded for the hosts, Sarries twisted the knife further and killed this one off as a contest.

Welcome to refuel ?? and reflect ?? with Alec Clarey.

Sean Reffell scored their third before Daly raced through for his second and the bonus point score.

His centre partner Nick Tompkins got in on the action jinking his way over before Farrell added another conversion for a 33-0 half-time lead.

Coventry started the second half with a decent spell of possession, but once they were held out, they were again made to pay.

Reffell crashed over to double his personal tally and Daly then completed his hat-trick, putting the finishing touches to a slick breakaway.

There was no let-up from a rampant Sarries in the closing stages as Sean Maitland was sent over for a brace either side of a Tom Whiteley effort which came courtesy of a flowing counter-attack.

As with last week, the final say was left to Dom Morris to canter home and now it is on to the play-off for Mark McCall’s men.

Sunday provided two ding-dong battles, the first of which saw Ampthill welcome Richmond for a match which was much enjoyed by the watching Mob.

The sides traded scores throughout the game and they were never out of reach of one another until the final whistle.

Richmond were first on the board thanks to two early Rob Kirby penalties before James Flynn barged over for Ampthill to open their account for the day.

The tricks were repeated soon after with Kirby notching a third kick at goal, but Ampthill replied through a front row try, this time Dave Ward barging over.

Jac Arthur was sent to the bin for the hosts and whilst Kirby was unable to kick his side level from the resultant penalty, he made no mistake when offered a repeat opportunity just before half-time. 12-12 at the break.

The A’s looked the more dangerous ball in hand but kept Richmond in the contest through their ill-discipline.

David Halaifonua raced over for a brace for the hosts to secure a try bonus, either side of yet another Kirby penalty goal.

Richmond then mustered their only try of the afternoon courtesy of debutant Graham Geldenhuys, with Kirby’s conversion making it a two-point game into the closing stages.

They could not find a late winner and Ampthill sealed the deal by driving Syd Blackmore across the line from a huge maul. Russell Bennett added the extras for a 31-22 final scoreline.

This was Nottingham’s last home game of the season and with head coach Neil Fowkes departing when the Championship campaign concludes, the Green and Whites welcomed Bedford for a battle between two sides who have found wins hard to come by.

In the end, the hosts snatched it in the final play as the lead changed hands twice in the last minute and after losing their opening seven, Nottingham now have back to back victories.

The first half was a turgid affair with a lack of action for the returning fans unless you’re a lover of scrums.

Nottingham scored the only points of the opening 40 when Jake Farnworth was driven over for a textbook maul try which Alex Dolly converted.

An endless sequence of scrums followed, resulting in Emmanuel Iyogun being yellow carded for Bedford, but the Blues held firm.

They then went on the offensive, hammering the Nottingham line which saw Luke Frost sent to the bin, but no further score was added before the break.

At half-time, whatever was said did the trick for both sides as the spectators certainly got their money’s worth in the end.

Bedford finally got themselves on the board through Jordan Onojaife’s try, but Nottingham hit back as they bundled Willie Ryan over.

The trading of tries was repeated as Bedford worked a way to send Josh Gillespie through before Nottingham quickly responded thanks to another Farnworth score from close range.

Bedford managed the final try of the afternoon with Jack Hughes finishing well, but Will Maisey’s missed conversion meant they were still 19-17 behind going into the closing stages.

After sustained pressure, the Blues were awarded a penalty which Maisey sent between the posts to give his side the lead for the first time and surely a late snatch and grab.

Nottingham had other ideas, though, and they worked their way through a succession of Bedford penalties before bringing on the kicking tee. With the clock in the red, up stepped Dolly to do the business.