Matt Beesley: “I needed to ask Northampton if they were sure about signing me as I didn’t believe them!” 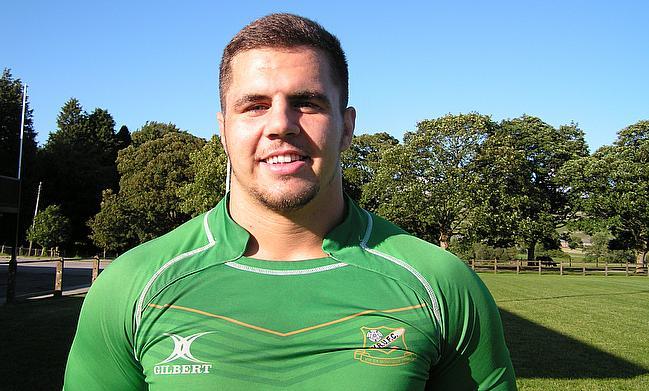 Ollie Thorley: “I feel lucky to have played for my country”
Spirit and resolve will be key – Matt Beesley
Ben Christie: Crossing the boarder
Leicester Tigers starlet Owen Hills insists injury won’t derail his England dream
Zach Kibirige: Growing at Newcastle
Biyi Alo: “Aiming as high as I can”
Perkins out to impress Saracens

Matt Beesley may not have been too interested in what Northampton Saints’ results were at the start of this season, but you can be absolutely certain that over the last few weeks, he has been watching the Saints avidly.

Beesley’s story is one that most children grow up dreaming about and the 24 year-old has made it a reality. Beesley currently ply’s his trade at National One side Wharfedale, but next season, he will be rubbing shoulders with the stars of the Aviva Premiership after securing a move to Northampton.

His solid performances in the third tier of English rugby caught the eye of the scouts from Franklin's Gardens last year and now the prop forward is preparing for life at the top level after a successful trial two months ago. That preparation will be put on hold until the summer though as on Saturday his focus will be on Wharfedale as they look to avoid relegation from National One.

“I believe that we can still get ourselves to safety in National One and achieve that survival,” Beesley told TRU.

“We still have two home games left against opposition that we need to target. We have shown against the bigger teams that we can play this season.

“We know we can compete with these teams and its now about finding a way to put in the complete performance. We have to target those two home games against Hull Ionians and Coventry and if we get something from those games, I 100 per cent think we can survive.”

Beesley’s current side sit 11 points from safety with three games left of the season, but despite that looking like a huge mountain to climb for Wharfedale, Beesley oozes confidence. From just listening to him, it seems that confidence has always come naturally to the former England Students player.

When we spoke over the phone, he reflected on a 10-year period that has seen him go from his local club Sandbach, through various higher levels of rugby and emerge with his whole career still ahead of him. The exciting prospect of Northampton Saints is now the next chapter in his fantastic story.

It has been a journey full of highs for a player who has always stayed realistic about where is rugby career would go next. Currently, Beesley seems to be a player who is only looking straight ahead and knows how big of a challenge the next couple of years will be for him.

“I needed to ask Northampton if they were sure about signing me. That’s how much I didn’t believe it!” he said. The last few months in my whole life has changed and the next two years will too. Never in my wildest dreams did I expect this.

“But, seriously, it will be a big step for me joining Northampton. Obviously, it’s a completely different to the usual Tuesday/Thursday training sessions at National One level.

“Having trained with Northampton and played a couple of A League games over the last couple of months, I know now what to expect and I believe I have always been confident about making the step-up.

“I like to think that I have got a narrow mind-set in terms of how I handle rugby. I am focused always on the game when I need to be and saying ‘No’ to that night out or those couple of drinks has now paid off as playing rugby is always something I wanted to do.”

There is no arrogance about Beesley, just someone who has followed his dream and finally through hard work and dedication (and of course talent), he has got what most young rugby players crave – a shot at the big time.

This hasn’t just all fallen into Beesley’s lap though. The reason he has been handed a contract by the Saints is not through luck, but through the amount of hours he has put into the sport since first picking up a ball at his local club Sandbach.

His progress through the different levels of rugby has seen him represent Cheshire and one of the top rugby universities in the country, Leeds Beckett and it was during his time in Yorkshire where it finally dawned on him that he had the capabilities of playing rugby regularly and at a higher level.

“When I first originally played rugby, it was something I never thought I would be good at! I was just a big a lad and stuck on my boots and enjoyed the game.

“Over the last few years, with by time at Leeds Beckett and also the representative honours with England Students and more recently England Counties, it became apparent that maybe rugby was something I could do more permanently.”

At 24, Beesley has achieved a lot in his rugby career to date. He has represented his country and played at a high level in terms of university and National League rugby. His experience may well be different to those other players who have come through the academy route, but Beesley believes that is a personal positive for himself.

“I think the experience that I have got already will help me make the transition to the next level,” he added. I know it isn’t at the professional level, but at amateur level, I have played in quite a few big games.

“I like to think that that experience has helped me up to this point and can aid me going forward as a 24 year-old as supposed to an 18-year old just coming into an academy.”

Up until recently, he never thought he could make a career from rugby and he still believes it may not shape the rest of his life, but the path Beesley has taken has given him the opportunity to potentially make that happen.

He is keen to stress that his current focus for the next three weeks is on a club where he has spent just over two-and-a-half-years of his career and that is Wharfedale which can’t speak highly enough of.

“If I could recommend anywhere for anyone to play their rugby it would be Wharfedale,” he said. “They are a club that does everything right.  They get the essence of rugby completely right and that’s through the people working at the club.

“In terms of the rugby side of things, it is hard and tough rugby. You really have to earn your own respect. National One is a very good standard to play at and over the last two years it has been hard for me at times, but it has stood me in good stead and provided me with the right values which I can carry forward into the next phase of my career.”