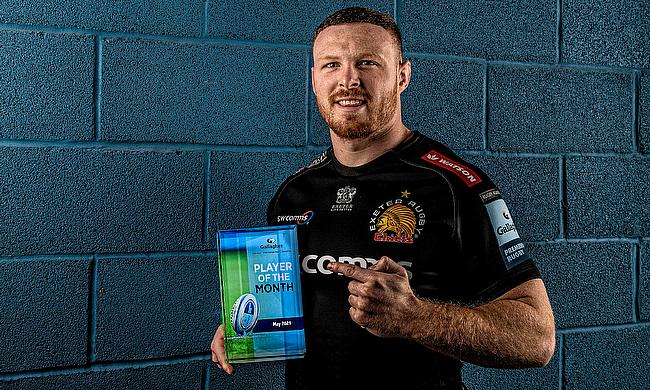 Exeter Chiefs No 8 Sam Simmonds completes a unique double today, becoming the first player to ever win two Gallagher Premiership Rugby Player of the Month awards in one season.

Simmonds was the clear winner of the May award after breaking the record for tries in a Premiership Rugby season while scoring a hat-trick against London Irish. His incredible season, which recently included a call up for this summer’s British and Irish Lions tour, brought acclaim from BT Sport pundit and Gallagher ambassador Ugo Monye.

Monye said: “It feels right for Sam to win Player of the Month in the month where he smashed the record for the number of tries scored in a single season. In the match against London Irish, history was made.

“His form has been sublime, that goes without saying. He’s been great in lots of different ways too. Not only has his output and numbers in attack and defence been great, but he’s also been selected for the British and Irish Lions.”

Simmonds’ Exeter Chiefs also hit a hot run of form in May, beating Worcester Warriors, London Irish and Newcastle Falcons as they cemented their place in the Gallagher Premiership top four, booking a spot in the semi-finals.

Monye added: “The Chiefs have been going well and Sam’s been a massive part of that. I think, this season, one of his motivations was not being included in the England squad and Rob Baxter and Exeter Chiefs have spoken about how they’re trying to bring the best out of their players.

“With Sam, it’s almost become a self-fulfilling prophecy. The more you score, the more confident you get, and the more the team look to get the ball in your hands because you’re scoring tries.

“The way Exeter play, it’s very much a team effort – Sam Simmonds doesn’t score those tries without the work of Dave Ewers or Jacques Vermeulen. But what’s also important to remember is that he doesn’t just score tries from five meters out either. I remember the opening night of the season where he scored one from the halfway line running around Nathan Earle and Danny Care, who are no slouches.

“To break that record is an extraordinary achievement. Firstly because of the number and secondly because of the position he plays. When you look at the list of try scorers that are occupied by former or current Premiership players you traditionally expect to see them in the backs.

“I guess Sam’s success is an illustration of how far the game has moved on and how the Chiefs have provided him with a platform to get the very best out of him, their team and their other players.

“Every single season we have a golden boot winner but we don’t have someone smashing the record for the number of tries scored in a singular season and that’s the most outstanding part of the achievement for me.”

Although Covid-19 restrictions prevented a physical presentation of his award, Exeter Chiefs fan and Managing Director of Gallagher’s Exeter Office, Cheryl Phillips, said: “Sam Simmonds, our local lad from Teignmouth, is in blisteringly brilliant form. His all-action style and effortless switch from attacking play to stopping power in defence have made him pivotal to every performance. And having just carved his name firmly into the record books with his top-flight try-scoring – not to mention getting a Lions Tour call-up – surely there could only be one real contender for Gallagher Player of the Month?

“Sam is part of an on-fire Chiefs team that just seems to be getting better and better by the game, notching up some huge scores and vital wins as we near the climax of this season. For local fans and businesses like us here in the rugby community, we couldn’t be more proud. And you can bet the roar at Sandy Park this Saturday, for the final round, will be every bit as loud as it would be at stadium capacity!”

Simmonds – as part of his prize for being named Gallagher Player of the Month – wins a shirt signed by the whole Exeter Chiefs squad and framed by Gallagher to gift to a charity of his choice, to help them raise funds for their cause.

Simmonds was judged by a panel of experts as the player who made the biggest impact in Gallagher Premiership Rugby in May 2021.

He was involved in a four-way battle to win the award eventually beating Ellis Genge, AJ MacGinty and Jean-Luc du Preez to the prestigious prize.