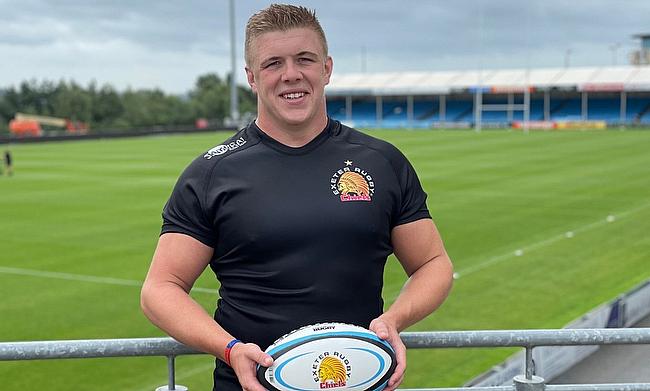 Sandy Park is basking in sunlight early on Wednesday afternoon and behind Sam Nixon, his Exeter Chiefs teammates are doing their extras before heading home for the day.

In the background, one of the senior coaching staff can be seen on top of a ladder, receiving throw-ins from the team's hookers as preparations for a trip to London Irish continue. Nixon looks more than at ease, looking down at the computer in one of the technical areas at the team’s home venue.

Since their promotion from the Championship in 2010, the story of Exeter is a well-known one, winning two Premiership titles and a Champions Cup in the last 12 years.

This week, the club also announced a "new direction" for the Chiefs as they will scrap their Native American imagery and rebrand, with the new visual identity celebrating Devon’s own rich history.

On the field, Rob Baxter’s team has become a central hub for rugby talent in England as numerous Academy products have gone on to represent the club regularly and achieve international honours.

Arriving in the summer from recently relegated Bayonne, Nixon is also a product of the South West. Educated at Millfield, the tighthead prop comes from a farming family just outside of Yeovil. Upon leaving school, he joined the London Scottish Academy in the hopes of making the leap to professional rugby before joining National One’s Plymouth Albion.

During his time at Brickfields, Nixon starred for the Devonshire club, his efforts catching the attention of those at The Rec. Several years back home in Somerset soon followed before he opted to leave Bath and England behind for France.

Having been fully professional for almost five years, Nixon credits his time playing in the third tier of English rugby as the reason why he is at this point in his career now.

“I left school and I didn’t exactly know what I was going to do,” Nixon said. “Initially I was expecting to work on the family farm and have a normal job, then play a bit of local rugby. It turned out I wasn’t prepared to.

“I wanted to try and play as high as I could, and that is what brought me to London Scottish. They had an Academy they were pushing, which could lead to first-team opportunities and that pushed me to be full-time.

“Scottish went in a weird direction. They had the SRU come in as backers to push the club to the next level as a kind of third Scottish team and it drove out the lads that either weren’t Scottish or weren’t in the picture, and I was one of them.

“I wanted to play closer to home and Plymouth were in National One, a highly reputable club and it was a bit do or die. They were in a rebuilding stage, and it was almost by accident and through recruitment that we ended up with a really good side.

“That is what led me on to Bath, but Plymouth was the platform, the main platform for getting me to a Premiership club.”

Whilst wearing white, Nixon played alongside a host of current Exeter players. When they were still in the Chiefs Academy, Joe Simmonds and Harvey Skinner each made their way down the A38 in the hopes of furthering their rugby careers.

It is a familiar path for many, Luke Cowan-Dickie, Henry Slade and Jack Nowell all having done the same before becoming some of Rob Baxter’s and Eddie Jones' most trusted individuals.

“I played a lot of rugby at Scottish, but it wasn’t at what you’d call a reputable standard,” Nixon said. “My first game for the club was against Rosslyn Park and I ended up doing 80 minutes and I was thinking ‘bloody hell, that was tough’.

“It was a new level I hadn’t hit before and as that year went on, it became quite a normal level and I joined Bath off the back of how I was playing at Plymouth and I could take my rugby to the next step by being professional again.

“I just think National One, especially with how the Champ is going, is more appealing than it is to be playing in the Premiership.”

Across three years representing Bath, Nixon made 20 appearances for the club. Ten of those came in the 2019/20 season, the still-developing front-row forward benefitting from the return of Neal Hatley to the club, as well as Mark Lilley’s tutelage at Farleigh House.

Making continuous leaps in his growth, Covid-19 then hit and the 25-year-old’s time in Somerset came to a close and a move to Bayonne beckoned. For the first time since leaving Brickfields, Nixon had the opportunity to prove to both himself and others that he was a capable starter in tier one domestic competition.

“When I moved to France, the understanding was that I was there to play rugby as first choice,” he said. “I then went from playing a few senior games every year to playing 25 last year. Then you realise the responsibility on you, and you can only get better by being on the pitch.

“Because I was playing week-in, week-out, it starts to not only get your game better, it offers better opportunities. Plymouth was definitely the springboard to get me into professional rugby and then I think France is the springboard that has got me to being a genuine player in the Prem.”

Playing in 23 Top 14 games across last season, Nixon only came off the bench twice but despite his and his teammates’ best efforts, Bayonne finished 13th in the league, their status as a top-flight club decided by an ‘access’ match against Biarritz.

How that game panned out set social media ablaze. After 80 minutes and extra time, the clash finished 6-6. It came down to one of the rarest sights in professional rugby; a penalty shootout.

Ultimately it was Biarritz who won the match, former England international Steffon Armitage’s kick the difference. It is a game that Nixon hasn’t watched back, and nor is he likely to.

Interestingly, as Nixon was making his way back across the English Channel, a former Bath teammate was going in the other direction. Back-row forward Zach Mercer joined Montpellier with the aim of developing his game overseas following several years out of England contention.

Over a week ago, Eddie Jones revealed that he briefly met with Mercer in France and said he feels that the 24-year-old will be returning to England sooner rather than later to compete for international selection. Having done a similar thing himself to better his game long-term, Nixon says a new perspective can benefit individuals in their careers.

“France can be a point of difference and the land of opportunity,” Nixon said. “What they respect from players is a lot different to what we respect in the Prem.

“A lot of the positional things are like, 'if he is a tighthead and he can scrum and defend, then he is okay, worth his weight in gold.' Here, you have got to do a lot more than that.

“For them (players in England) it works and sometimes I think that players, if they get stuck in a corner or at a club, then France is a genuine opportunity to go and try something different.”

But as one door closed another opened. When Bayonne’s relegation was confirmed, a break clause in Nixon’s contract was activated and he was free to look elsewhere for work. Eventually, a move to the county he credits with launching his professional career became a possibility and another chance to prove himself in England.

“When the opportunity to come back arose, I was like ‘it is close to home, it is one of the best clubs in Europe and I was only going to get better’,” Nixon said.

“In a lot of my career choices, I have tried to be a better player and more than likely it helps, because as long as you keep going up, you will be fine.

“That was one of my main reasons for coming here, to become a better player, learn off different lads, different coaches and I can offer stuff as well.”

His move back to the South West also meant a return to the farm. Nixon refers to his family’s dairy farm as an “open prison”, with the middle of each day completely free, the only requirement being that you have to be available for fork at 05:00 and 17:00.

Working outside of rugby in Somerset is no new thing, having done the same during his London Scottish and Plymouth Albion days. Now, Nixon is no doubt thankful to have an understanding Director of Rugby in Rob Baxter, who at the conclusion of the rugby season, can generally be found on his family’s farm.

On the field, things have been going well for Nixon too. Having started six games for Exeter so far this season, the 25-year-old has certainly built on his experiences in France, placing himself firmly in contention for a regular starting tighthead spot.

Most recently, he made a return to France to face Montpellier in the Heineken Champions Cup. Chiefs lost that clash 37-26, but their place in the Round of 16 was secured and a date with Munster is now scheduled for early April.

As things stand, Exeter are sixth in the Gallagher Premiership table, their game this weekend a trip to seventh-place London Irish in Brentford. Five points from the playoffs, it is almost a given that the Chiefs will likely find themselves in contention for a top-four spot come the end of the season.

Nixon’s compulsion up to now has been to carry on progress, Sandy Park no doubt the best place to do that.

“I went from quite a relaxed club to one of the most intense clubs in Europe,” he said. “Standards are ultimately set far, far higher than most other clubs and that’s the first thing. Straight away, you are in an environment that when you need to be on it, you need to be on it.

“I have been at other clubs where you drift around, nothing really happens and then it’s gameday. Here it is very much that before we get on that pitch at the weekend, you are ready to play. That was probably my biggest eyeopener, how intense everything was.”