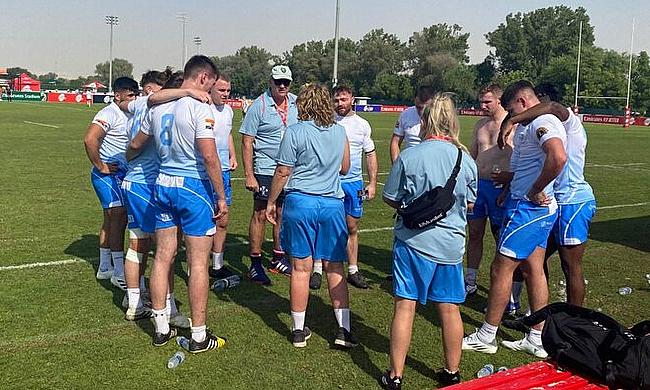 The Lion Rugby 7s was formed in 2019 by, at the time, a 17-year-old me! Now 20, I continue to captain and run the day-to-day operations of the side whilst combining other commitments such as studying for a degree, running my own kit business and playing XVs rugby for RFU Championship club, Richmond.

The Lions side, perceived on paper as being the underdogs and the youngest team at the Dubai 7s, fearlessly made their mark last December by beating higher-ranked opposition including a pulse-raising quarter-final where we dispatched the Qatari national side in front of a bumper crowd.

Qatar were ranked higher than the UAE national side, who featured 4th in the Asia Sevens Series, just one place behind the rugby powerhouse, Japan.

We started the 2021 season slowly as a very young squad, punching well above our weight on quite a few occasions.

We then achieved a semi-final, then a final and that was followed swiftly by a big trophy lift at the M5 7s.

Many would have dismissed us as “too green” when we announced our involvement in Dubai, but I think people need to understand that being a young side, every performance gives the individuals an opportunity to step up again and again and see the continued potential the longer we go in this journey.

A core group of players committed to us and stayed the duration through the tough matches and onto the international stage in Dubai. We beat a very well supported Qatar, who were essentially a home team at this event, finally bowing out to the eventual group winners Russia – what an amazing finale!

There was disappointment at not lifting the trophy, but that is now our goal for next season, and we understood better where we were in our journey as a club.

The rapid rise of the side can be credited in no small part to the impressive and very supportive backroom team who have been with us since the start of our journey. Coaches Mark Francis & Nic Evans took the reins in Dubai, with medical support from Beth Jefferies.

Mark has been with the club since 2019 and has overseen the majority of our tournaments. A former head coach for both Scotland & Richmond Women, he is also married to former England & Scotland international and points record holder Debbie Francis.

Mark is first and foremost a family friend and father to one of my close friends, Tom, who I have played rugby with since we were really young. What started as a favour to help us out has continued with Mark being involved ever since! A truly very invaluable person to have on our squad.

When asked about his role at the club, he said: “I focus on creating life-enhancing experiences for the Lions. That means mentoring players in all aspects on and off the field. Living Lions’ values and seeing improvements in individual and a collective belief is why I commit to the Lions.”

Nic Evans is a former Welsh international with over 100 appearances for Wasps in the Premiership, before retiring in 2013.

Since then, she has been the lead role in the Amazon Prime documentary “Steelers” where she was the Director of Rugby for three seasons.

Nic sits on the World Rugby Board and was the Women’s Head Coach of the Wooden Spoon Marauders in 2021, from where two players - Grace Crompton (an ex-classmate of mine) & Ellie Boatmen - have since gone on to gain GB Sevens honours in the World Series.

Nic is currently a lecturer at St Marys University, Twickenham and coaches the Middlesex U20s. About her role with Lions, Nic commented: “At Lions, I have been given an exciting opportunity to develop players to achieve their personal goals in relationship to their own development within a team environment where we encourage full expression of creativity.

“My responsibility is to nurture a performance environment where we want to be successful without pressure. I enjoy it because we see rapid progress over tournaments, players thrive and work for each other.”

The medical side of the team is excellently supported by Sports Therapist Beth Jefferies who joined us in 2021 after her stint with Samurai & The Super Sevens Series.

Beth has previously worked for The Black Ferns, The Wallabies & The Barbarians and recently gained her MSc in Sports rehabilitation at St Marys University, Twickenham. When asked about her duties within the set-up, she replied: “My role with the team is to ensure that the players are fit and healthy across the season. Managing injuries and conditioning the players to the highest standard to achieve the best results.

“I enjoy working within the team as they are very team focused and driven both as individuals and as a team. I look forward to what the 2022 season has to hold!”

2022 is set to be an ambitious year for the club as they fully embrace the elite international sevens circuit visiting seven countries and competing in over 12 tournaments. Finally, our latest announcement is the launch of the brand-new Lionesses side, who will partner the Lions as the official female representation of the club. More coverage of this exciting new launch will follow in the next few weeks.