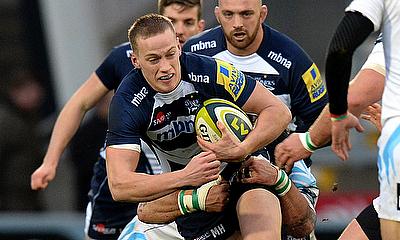 On Saturday evening, 44 days of drama, trials and tribulations will be over after the conclusion of the Rugby World Cup final at Twickenham.

It started with 20 teams and now there are only two  - and according to Sale Sharks full-back Michael Haley they are “the right two” as New Zealand and Australia will battle it out for the their third World Cup with the All Blacks looking to be the first team to retain the famous trophy for the first ever time.

But, while the final is set to be an enthralling battle between the top two nations of world rugby, it may seem a lifetime ago that Japan stole the headlines and England crashed out of the pool stages.

This year’s World Cup came round too quickly for Haley, but the 21 year-old admits it has been a brilliant tournament right from the first whistle and believes that it could well be down to some classy performances by the Tier Two nations

He said: “I think it is the first World Cup where each of the teams has had a chance in the games. It was clearly shown by Japan in that first game against South Africa when they ended up turning them over when no-one was expecting it.  Some of the best performances have come from those ‘so-called’ Tier Two Nations.

“I think the progress they have made from the last couple of World Cups to this one has been massive which shows that they are pushing the big teams all the way to the end and they are getting more competitive. Compare that to previous World Cups, that’s never really happened before and that needs to continue till 2019.”

Haley had a sensational first season at Sale last year making the No.15 shirt his own and he has already started both of their matches against Saracens and Worcester this season.

The young English prospect could well be a name on the lips of many England fans and rugby pundits come 2019 if he is to continue his excellent form.

But for the tournament just gone, Haley was a fan of England throughout the tournament and like so many, he was disappointed to see the country fail to progress past the pool stages.

He added: “As an English lad growing up, you really want to see England do well on the big stage and in the end it was disappointing to see them not achieve what I know they can.

“I don’t think you can blame it on the preparation or anything like that and I believe they did everything they could have done.

“They were beaten by Wales and beaten by a very good Australia side that are in their best form for a while and anyone could have been knocked out of that tough pool and England were the unlucky ones.”

For now, Haley is focused on Sale. He is clearly an up and coming star and his attitude on and off the pitch emphasises that.

He certainly has the ability and even though he is set to start once again for Sale this weekend against Northampton Saints, he is still keen to learn from the current internationals of the game.

Haley said: “The full-backs that have stood out for me are the two World Cup final full-backs in Ben Smith and Israel Folau. They are both excellent players and it will be a great match-up on Saturday and I have learnt a lot from watching them.

“I thought Mike Brown was excellent for England even though we were struggling, he was phenomenal at the back.

“Joaquin Tuclet did very well for Argentina. He’s got a massive boot on him and caused a lot of trouble quite a lot of times of opposition so he also stood out for me.

“Argentina themselves really have impressed me too. They were brilliant. They play fluid rugby and when it was on-to-go, they went and its exciting rugby so every time they played a match it was exciting to see what would happen.”

With Sale’s game with Northampton scheduled for Sunday, Haley will no doubt be glued to his television set come 4pm on Saturday and he predicts a tight encounter at Twickenham.

“It’s going to be a tough one and I don’t want to sit on the fence!”

“New Zealand are probably the best team there, but Australia also have a lot of individual brilliance. They have David Pocock and Michael Hooper who are a nightmare at the breakdown for the opposition, but I think because of the talent they possess I think New Zealand might just scrape it"