Jacques Burger: The honour of the jersey 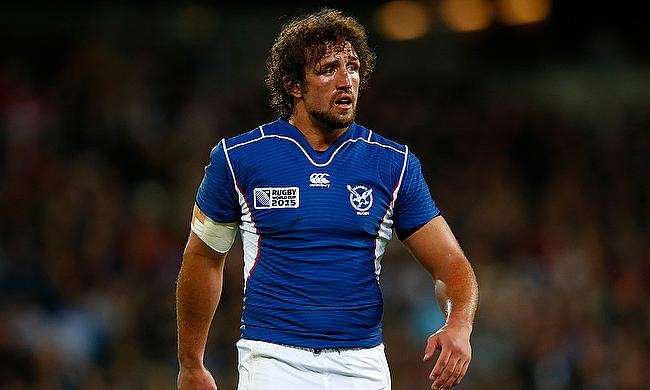 Jacques Burger has stepped down from international duties with Namibia
©PA

“The game was getting too much for my body,” says Jacques Burger as he explains to Talking Rugby Union’s Max Skofic about the sheer impact his body has endured due to him being one of the colossuses of World Rugby.

“I have gone through a number of serious injuries and even getting ready for weekend matches was a problem. I already said from the beginning that this would be by last World Cup and afterwards I would retire from International Rugby.

“Unfortunately, it got cut one game short due to my concussion against Georgia, but it was still so special to represent my country and I was extremely proud. It was a huge honour and I will miss it. It was fun while it lasted!”

Burger called time on his international rugby career after leading his side into another World Cup and he is now reflecting on representing a nation where in every game, the team was written off before a ball was even used for the warm-up let alone the match itself.

But how many players relish that prospect and welcome that challenge?  I would say very few, but hearing that from Burger – it didn’t come as a surprise at all.

Before the World Cup, the bookmakers had Namibia to finish bottom of their World Cup group which contained World Champions New Zealand, semi-finalists Argentina, Tonga and Georgia. But the 32-year-old from Windhoek always had ambitions of greater achievements in the pool stages.

“I was disappointed we didn’t get the win, he says. “That is what we wanted from the beginning and that is what we aimed for.  But, looking back at it and looking at the performances the guys put in, I was extremely proud.”

“I think the tier two trend was set with Japan really. They beat the Springboks and people were like “Wow!” I think that game made other tier two teams think that they can be competitive.

“I now think that gap has closed. In terms of us, I think if we were better in our scrums, lineouts and maybe our defence as well, we would’ve been a lot more competitive. It would have been 50/50 between the Georgia and the Tonga game. We could’ve won either one of those or both of those matches. It is great to see the tier two nations growing.

“It makes World Cup and internationals better and better and it means an exciting future for rugby.  With the little the tier two nations have - just look at all the amateurs Namibia had - the performances have been unbelievable and I have a lot of respect for them.”

Listening to Burger, you knew he understood why his beloved country weren’t given a chance before the tournament.  They were the lowest rank side in the tournament and their squad against the All Blacks included eight amateurs. But, the Saracens man saw how dedicated these players were in the build-up to the competition and how much they wanted to be successful and Burger couldn’t have asked for much more than that.

“I have got so much respect for every single guy in that team,” says Burger who scored two tries in the tournament for his country. “They have to come and do their weights early in the morning, then get dressed go to work while the rest of the squad train at about 8am and then again in the early afternoon. Then in the evening, the full squad is back together and we’re all home by about 9:30-10 in the evening sometimes.

“But what made it easier, was their attitudes. They never came up with excuses. They never rocked up and didn’t look in the mood for it because they all wanted to learn, get better and be successful.  To get up at 5 in the morning and come home at 10 in the evening it is not easy, so to all the guys that did that – I’ll take my hat off to them.”

The praise Burger gives them is so genuine and it just shows the type of person he is. But, after nine major operations in six years, he finally had to hang the boots up on the international stage after smashing his body into opponents relentlessly during his career.

So what’s next for Burger? After announcing his retirement for next May,  he would like to stay in the game he “ loves and is so passionate about” as a defensive coach or he will go back to Namibia to continue his farming project which he got into six years ago.

Bur right now, Burger is on his way back to return to Premiership Champions Saracens, but before he recommences his duties, he will be tuning into the World Cup Final on Saturday and it isn’t a surprise that the 6ft 2in and 16 stone backrow forward is a huge admirer of Australia’s David Pocock and Michael Hooper and New Zealand’s Richie McCaw.

“Australia are a very well coached team and Hooper and Pocock are very good over the ball,” he says. They make it very tough for opposition teams to make an attacking platform. On the other side, you have Richie McCaw and he tries to do the same team so the back row challenge will be massive.

“I think New Zealand will be the favourites going into it. The match they played against South Africa wasn’t the most physical of matches not as much as the Argentina Australia match. I think that would have taken a lot out of Australia and hopefully they don’t have too many injuries because the Australians do live dangerously and they look like they can score at will.

“If I had to put money on it, I think New Zealand just because they were in this situation not long ago when they won the World Cup and they have peaked at the right time. Their performance against France was unbelievable – they made it look so easy. They obviously had a tough game against the Springboks, but that will do them well and I think the All Blacks will take it.”