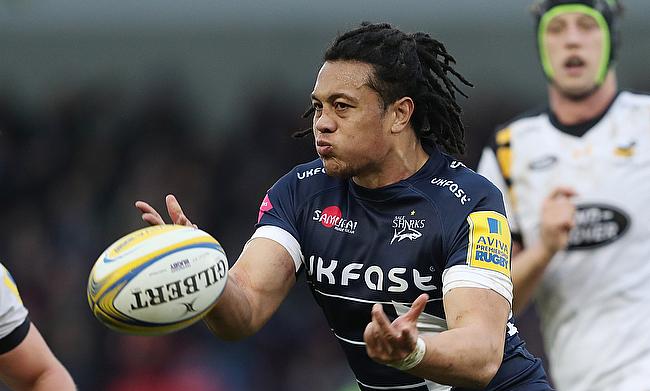 TJ Ioane was on the scoresheet for Sale
©PA

Sale Sharks managed to resist second half resurgence from Worcester Warriors as they start their Anglo-Welsh Cup campaign with a 21-24 victory at Sixways.

Cameron Redpath became Sale's youngest ever player to make a start at the age of 17 and 326 days. Winger TJ Ioane got the visitors off the mark with a fifth minute try while AJ MacGinty slotted the conversion.

It took Worcester Warriors just six minutes to get their first points on the board when Michael Dowsett crossed over allowing Tom Heathcote to add the extras and the scores remain levelled at 7-7 by half-time.

Sale Sharks stepped up the ante at the stroke of half time with Will Cliff and Ben Curry adding further tries and Heathcote's double conversion took them to a 7-21 lead heading into the second half.

Addison was replaced at half-time by Kieran Wilkinson but Sale still had the better of the opening exchanges of the second half. The home side continued to make frequent handling errors but ill-discipline from Sale - six penalties conceded in 16 minutes - gifted their opponents a platform in their own 22.

The Warriors lacked the accuracy to capitalise but eventually the referee's patience was exhausted and Sale prop James Flynn was yellow carded for another scrum offence.

The home side capitalised on the advantage of having an extra man as Ollie Lawrence danced past the post and Heathcote's conversion reduced the gap down to seven points. As the game was heading for a tight finish, Heathcote kicked a penalty in the 76th minute to stretch Sale's lead to 10 points.

Despite a final minute try from Tom Howe and a conversion from Sam Olver, Worcester went on to lose the game by three points.